The Ducks’ defense looks as bad-ass as those of the James-era Huskies. Since Jacob Eason currently is UW’s lone game-breaking talent, it falls to him to lead the upset. 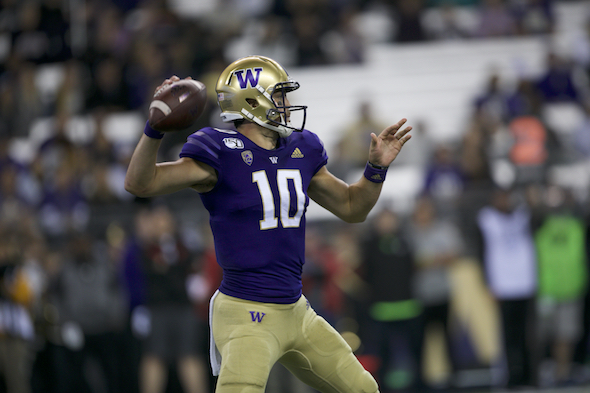 Jacob Eason has to do more than clear his throat Saturday. / Drew Sellers, Sportspress Northwest

In the middle of the night in Tucson the past Saturday, the Washington Huskies apparently woke up screaming. Well, maybe not screaming, but mad. Or startled. Or disturbed. Maybe just perturbed.

Whatever the calibration, it was halftime against the Arizona Wildcats, who were ahead, 17-13. The Huskies just completed a sixth consecutive quarter of football that bordered on the comatose. Since they ended up winning 51-27, clearly something hysterical, spiritual or pharmaceutical happened in the intermission locker room.

But all anyone is willing to share is that Jason Eason spoke up. Apparently for the first time in his six-game career as Huskies starting quarterback. It is not clear whether the speech was Teddy Roosevelt-level, or more like Bluto Blutarsky in Animal House:

Whatever, it must have worked. But coach Chris Petersen was light on illumination, except to say Eason so far had been a bashful orator.

“Like he said afterwards, he’s more on the reserved side,” Chris Petersen explained at his Monday post-mortem. Did that mean he just cleared his throat in a menacing manner?

“When that ball is in your hand, naturally a lot of guys are going to be looking to you and your voice,” Petersen went on. “The number one way to lead is to lead through example. Play good and do your job, which he’s been doing.

“But it’s also nice when he starts kind of speaking out a little bit and bringing something to the table there.”

On Oct. 5, in Eugene, where Nike has a college, a similar episode developed when the heavily favored Ducks found themselves down 7-0 to at halftime to Cal, which earlier beat Washington, 20-19.

Coach Mario Cristobal reported that there was a commotion in the locker room ahead of his arrival. As he told the story to ESPN.com, senior LB Troy Dye could be heard though the door, saying things loudly that he likely did not learn in church.

“It was passionate and had a lot of energy and juice to it,” Cristobal said.

So much juice that Dye was sufficiently agitated, along with all in the room, to conclude his spontaneous sermon by puking.

The comparison in revival-tent styles is not to suggest that reverse-pivot digestion is the superior methodology.

But the 12th-ranked Ducks (5-1), who engage the 25th-ranked Huskies (5-2) at Saturday (12:30 p.m, ABC) at Husky Stadium, are playing with a cranial-vein-throbbing crankiness that looks and sounds like the Washington teams under Don James in the 1980s and early 1990s. Bookmakers are so impressed that the Ducks are three-point favorites in Montlake.

“I think the fans are still even trying to get used to it,” senior LG Shane Lemieux told ESPN. “We’re not the team that’s going to blow people out of the water with, like, trickery and all that kind of stuff. We have our foundation . . . playing a physical, downhill-running, stopping-the-run-on-defense football team.”

The Ducks now and the Huskies then were led by defenses that tended to make opposing offenses, well, throw up.

Since losing late at Auburn 27-21 in the season opener, the Ducks have given up in the following games, in order, six, three, six, seven and three points. That’s Steve Emtman-class badassery. The Ducks defense leads the Pac-12 in allowing the fewest points, passing yards and total yards, and has 21 sacks, 12 interceptions and 50 tackles for loss.

It’s hard to say what the Huskies are.

At season’s mid-point, they already have conference losses to two middling teams and thus have burned up their margin for error in returning to the conference title game for the third time in four years

The six bad quarters (including all four in the 23-13 loss at Stanford) seemed to be as bloodless a stretch as the Huskies have had under Petersen’s direction.

Given results so far, it’s either reverse the roles Saturday to out-gumption the Ducks, or work on the Cheez-It Bowl resume.

Through little fault of his own, the opportunity to pull it off falls on Eason, mostly because he is the one truly difference-making talent in the starting 22. The Huskies have flashed moments of great play, but until the second half at Arizona, steady success against Pac-12 competition has been spasmodic.

Much was expected of Eason, and he has delivered a lot. He’s hit on 66 percent of his throws for 1,692 yards, with 13 touchdowns and three interceptions. Yet, nettled by an experienced line that has played below expectations and a receivers group that has justified the low expectations forecasted for it, UW’s passing game in conference play is 10th in yards per attempt, and 11th in yards, touchdowns and first downs.

It’s hard to know ahead of time about leadership qualities, especially for a transfer whose arrival controversially forced out two other recruited talents, Colson Yankoff to UCLA and Jake Haener to Fresno State. But Eason’s command is up for speculation.

“It’s a slow process,” Petersen said. “There’s a bunch of different type of leaders, right? You got to be who you are. You’re not going to all of a sudden stand on the locker room stool and give a fire-and-brimstone talk.

“But it really is getting out of your shell a little bit and helping others. That’s what the leadership thing is about. Serving your program, your teammates.”

Petersen then went on a mini-rant about outsiders critiquing Eason’s leadership.

“Such a weird question,” he said. “I always get that. It’s like, ‘So and so is playing well. Is that guy is really becoming a leader?’

“I always (am) like, what are you talking about? Are you in the locker room? Are you on campus and seeing what he’s doing there? Because that, to me, what the leadership thing is about.”

Petersen’s irritation suggests the topic hit a nerve. Maybe he’s right. Perhaps Eason’s winning the game on upper campus, although it’s hard to find the analytics to score that.

Leadership is always an elusive value to define. Except, of course, when it isn’t there.

To find a competitive, winning edge, it isn’t necessary to throw up. But a football leader doesn’t need gastric theater to throw down when the rival hits town.