Thiel: 14-point lead too much for Huskies to bear

As was the case in Eugene a year ago, the Huskies were a few plays short of the Ducks, including one in which UW coach Chris Petersen didn’t know the rules. 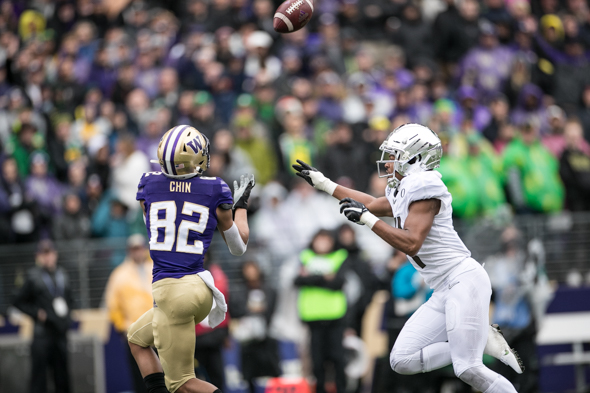 Given Washington’s bumpy, 2-2 start to its Pac-12 Conference play, being ahead 28-14 at home against the 12th-ranked Oregon Ducks early in the third quarter Saturday had to make the Huskies feel large and in charge.

Which, of course, turned out to be the problem.

These 2019 Huskies have not earned the right to cockiness in a conference game. They are a middling team in a fairly soft Power 5 outfit, and can’t get away with easing against the league’s one good team.

They managed two good quarters a week earlier against Arizona. They did well for most of three periods Saturday in front of a raucous Husky Stadium sellout. But after the 35-31 loss (box) to the favored Ducks, now they get to use the rest of the regular season to learn that thingy about four quarters.

Such knowledge, however, won’t help them reach the conference title game, where they’ve been for two of the past three years. That opportunity has passed. With three conference losses, they’re out of contention.

By mid-October, which is likely a shock to coach Chris Petersen’s system. Not that he would admit it.

“We are going to see things that are weird.”

He probably was referring to being out of contention. But he could just as easily have mentioned UW’s first play, weirdness that called into question whether Petersen knows the rules of the game.

Down 7-0, UW kickoff returner Chico McClatcher was penalized for unsportsmanlike conduct, nullifying a big return. The Huskies had dialed up a rarely used shenanigans play where two returners are deep, but one (McClatcher) was nearly invisible while he laid flat in the purple-painted end zone in his purple jersey. The kickoff was fielded by another returner, who lateraled to McClatcher after the coverage team committed the other way.

It took a couple of minutes of referee discussion to discern that a rule indeed had been implemented to ban such trickeration. Petersen obviously didn’t know it, and didn’t admit post-game to not knowing it.

“We got about four different explanations from the refs,” he said tensely. “They said, ‘You can’t do that’, ‘You can’t fall down before they kick it’, ‘You can’t lay down if you have the same color jersey as the end zone.’

“It is what it is. Last year, the rules were that you can’t lay down before they kick it. He laid down after the ball was kicked. We practiced that. That is what we were told last year.”

Until a whistle-blower produces a transcript of whatever went on between Petersen and the rulesmakers, the call will stand, and Petersen was embarrassed on ABC national TV.

The play wasn’t decisive, merely illustrative of how out-of-kilter the season has seemed. And it wasn’t the only play that irked Petersen. The other one was a more conventional bellyache, and this time he was right.

In their final possession and play of the game, the Huskies faced a fourth-and-3 at the Oregon 35-yard line with a minute left. QB Jacob Eason threw a little low and wide to freshman WR Puka Nacua, but the pass fell incomplete at least in large part because an Oregon defender was on Nacua’s back, pushing him.

“What did it look like to you guys? You had a better look at it,” Petersen asked reporters, who murmured assent. “I think we know.”

A penalty wouldn’t have guaranteed a win, but the Huskies would have enjoyed a fresh set of downs from the 20. The way Eason was throwing, the purple chances were decent.

He completed 23 of 30 passes for 289 yards and three touchdowns, out-throwing a bit his more regarded counterpart — and likely draft-mate in the NFL’s first round in April — senior Justin Herbert (24 of 38, 280 yards, four TDs). In a showcase that drew about 15 NFL scouts, neither hurt their cause.

The Huskies weren’t bad either.

In between the first-play bewilderment and the last-play injustice, the Huskies did a lot of good things. For much of the time, they were stout, aggressive and even clever. But just as last year in Eugene when they lost 30-27 in overtime, they were a few plays short of the Ducks.

Lamenting back-to-back, three-and-out series in the fourth quarter that opened the door to Oregon’s comeback, Petersen offered no specifics about changes by Oregon’s defense or failures by Washington’s offense that produced no points over the final 19 minutes.

“Sometimes,” he said, “it comes down to will power.”

That candor speaks to much about the 2019 Huskies. It is what is lacking.

Not that their weren’t some plausible excuses Saturday. Their top receiver, Aaron Fuller, sat out with a sore ankle, even though he tried to play. The Huskies were also missing two of their top three running backs, Sean McGrew joining Richard Newton on the sidelines.

That left RB Salvon Ahmed to bear the burden, which he did well — 127 yards on 18 carries.

Despite giving up 434 yards of total offense, the defense had numerous stretches of quality play, particularly in pass coverage that often left Herbert bereft of options.

But it was not enough to overcome Oregon, which has won 14 of the past 16 over the Huskies and, barring collapse, seems to have locked up the surprisingly weak North Division title. In the standins, the Huskies trail Oregon State.

It’s enough to make the purple people want to lay down in the end zone. 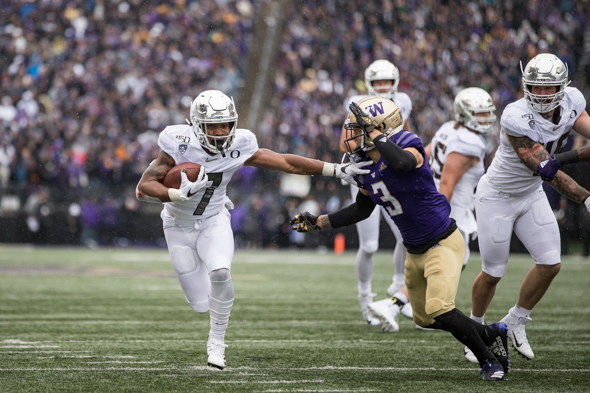