Seventh-seeded Dallas gave the Sounders all they could handle, but Jordan Morris’s final of three goals gave Seattle a 4-3 triumph in overtime in the MLS playoff opener. 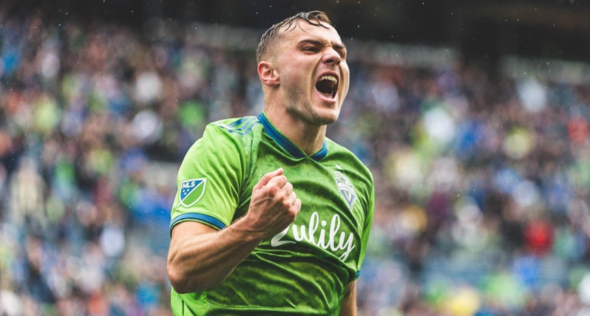 Sounders coach Brian Schmetzer was ready to pull Jordan Morris for fresher legs. The fact that he didn’t allowed Morris to complete a hat trick with the winning goal in extra time for a 4-3 triumph over FC Dallas Saturday. Seattle moves on to the Western Conference semifinals Wednesday at the Clink against Real Salt Lake, 2-1 winner over Portland Saturday.

“I was going to pull Jordan earlier, and I didn’t, and what does he do?” said Schmetzer after the taut, soggy drama at the Clink. “He scores the winner. It’s that little bit of balance of when you take off your best players and bring fresh players on.

The second-seeded Sounders (16-10-8, 56 points) had all they could handle from seventh-seeded FC Dallas (13-12-9, 48 points) in the highest-scoring playoff match in club history.

Raul Ruidiaz opened the scoring for Seattle and Jordan Morris took it from there for his first professional hat trick. Matt Hedges and Bryan Acosta bagged equalizers as Dallas dragged itself twice back into a match that featured 48 shots.

“They (gave) everything to come back and win this game,” Schmetzer said. “That is testament to a really good mentality.”

The visitors had earned only one win in 15 trips to CenturyLink Field since 2009. Coach Luchi Gonzalez opted for a conservative approach, as he trotted out a five-defender formation to start. The Sounders came into the match with nearly their entire roster available. Only forward Will Bruin, who had an ACL tear during practice in June, missed out.

Morris headed Brad Smith’s cross over the bar with the first chance of the day after 13 minutes. The match roared to life shortly after that when Cristian Roldan won the ball in his own half to set the Sounders on the counter.

Several passes later, Roldan fed Ruidiaz the ball in a pocket of space 30 yards from goal. The Peruvian star took a touch and set his sights on the net, firing a low, pacey shot towards the bottom left corner. Goalkeeper Jesse Gonzalez was unable to get his fingertips to the ball as it skipped off the turf and tucked into the corner of the goal.

That was a setback for Dallas, who were immediately forced to rethink their bunker-and-counter strategy. They had little choice but to scrap their pragmatism.

Dallas pressed Seattle farther up the field as soon as play restarted. The visitors moved the first line of confrontation by at least 10 yards, and their backline advanced to almost the midfield stripe.

The adjustment proved disastrous. Dallas’s young star, Reggie Cannon, was unable to get on the end of a low cross only a yard away from the goalline, as the visitors fashioned a decent chance before Seattle ruthlessly doubled their advantage.

Ruidiaz flicked on a long ball at midfield, allowing Joevin Jones to run into acres of space behind the Dallas back five. Morris sprinted down the left side, and Jones picked him out in the area with the defense exposed. Morris coolly slotted home with his first touch for a 2-0 lead.

After 23 minutes, it felt as if Seattle had a nearly insurmountable stranglehold on the
single-elimination match.

Fifteen minutes of scrappy lull followed the second goal as Seattle was totally content, and Dallas looked to establish a foothold. At 39 minutes, they halved the deficit through Cannon’s awkward finish inside the six-yard box.

Dallas moved the ball from left to right in the Seattle half until it found Barrios between the sideline and the penalty area. His cross took deflections off Seattle defenders Kim KeeHee and Roman Torres before finding Cannon on the far post.

The 21-year-old took the ball past Torres as he settled and scored with his next touch. Seattle players protested the goal vigorously, claiming the ball touched Cannon’s hand, but the goal rightly stood without the need for a video review.

The goal came out of seemingly nothing, both offering Dallas a reprieve for a wasted first half as well as a punishment for a Seattle side that fell asleep.

The Sounders started the second half brightly, engineering two chances to regain a multi-goal lead. As the half began, Seattle captain Nicolas Lodeiro forced Gonzalez to push his shot from distance over the bar. Moments later, Lodeiro found space along the endline but no teammate could reach his low cross as it rolled past the goalmouth.

Seattle came to rue the squandered chances when Dallas equalized a few minutes after the hour mark. The missed opportunities coincided with the visitors’ best stretch of the match.

“It was like we were afraid to push out and defend,” Schmetzer said of the first 20 minutes of the second half.

At 64 minutes, center back Hedges leapt to meet a corner kick from about six yards away from goal, and he thumped his header past Stefan Frei to level the match at two. The goal
bookended a heroic 35-minute effort from the visitors to claw their way back.

Seattle responded by subbing on Victor Rodriguez for Smith, reigniting the fire in the Sounders’ attack. They assumed control of the match for the next 10 minutes, culminating in Morris’ second goal.

Gustav Svensson met Lodeiro’s left-sided corner at the near post, and his flick-on fell right to Morris on the goalline. The Mercer Island native scored as his defender dragged him to the ground, marking his second finish with his weaker left foot.

It seemed Seattle would put the match to rest five minutes later, only to be foiled by the play of the match from Gonzalez and defender Ryan Hollingshead. A swift Sounders counter saw the ball fall for Rodriguez with a tight angle to goal on the right side.

Gonzalez saved his initial effort and the ball popped high, still only a few yards from goal. Ruidiaz reacted first and volleyed the ball towards the right post.  Hollingshead, already perched on the line to aid Gonzalez, sprung to his left and saved the ball off the line.

After a few more seconds of scrum in the penalty area, the visitors cleared their lines. Dallas’ valiant last-ditch clearances took on new meaning when they tied the match again five minutes later.

The Sounders again failed to mark up on a corner, this one swinging in from the
left side. The ball flew deep to the far post where Acosta was all alone in space to loop his header over Frei and into the net. The goal tied matters at 3 and meant additional soccer beyond 90 minutes.

Dallas started the half-hour of extra time in the ascendancy, creating two excellent opportunities that nearly yielded a first lead of the day. Barrios should have hit the target barely two minutes after the restart when he headed over the bar from the center of the area without any pressure near him.

Brandon Servania’s shot from the top of the box forced Frei into the save of the match five minutes later, the goalkeeper sprawling to his left to keep the ball out of the top corner.
Seattle’s veteran goalkeeper was sharp all night, making a series of difficult stops.

Schmetzer heaped praise on Frei: “I’d rather have him than any other goalkeeper in the league.”

Seattle’s attack lacked venom in the first half of extra time. They didn’t regain the front foot until the second period, as the hosts tried everything to avoid a penalty-kick shootout.

It seemed as though the crucial moment had fallen to substitute Luis Silva, who headed a cross towards the bottom right corner on 111 minutes. Gonzalez was equal to the effort though, and Dallas countered as play became increasingly stretched.

The decisive sequence came to pass on 113 minutes as a scrum in the box gave Seattle multiple looks to knock home the winning goal from close range. Morris on the far post rose above his defender to head in his third goal.

The Stanford product and finalist for MLS Comeback Player of the Year had his best performance since tearing his ACL in February 2018. Morris post-match kept his typical cool and modest demeanor.

“It’s all about the team winning,” he said. “The first thought was, ‘We gotta finish this game out, don’t want to go to (penalty kicks).’”