Earl Thomas, Lamar Jacklson and friends had reason to party as the Ravens, in a stirring 30-16 beat-down, showed the Seahawks that all is not as well as 5-1 made it seem. 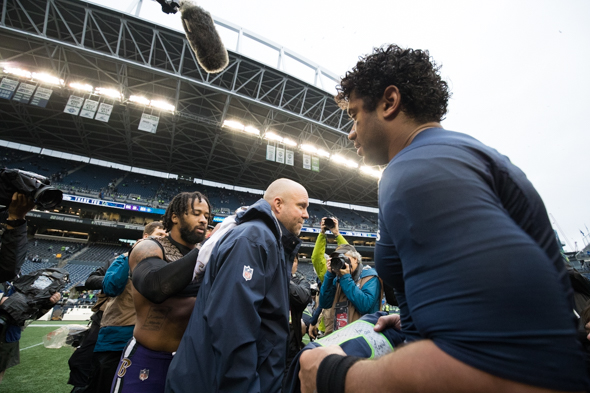 Looking for a trenchant statement about the events of the afternoon and its impact on the season, we turn to Seahawks WR Tyler Lockett, scorer Sunday of the Seahawks’ only touchdown, although it was one of two TD passes thrown by Russell Wilson.

“The lesson was,” he said, “you can’t get away with everything.”

For six games, the Seahawks got away with a friendly schedule, an inadequate defense, light punishment for poor execution by players and coaches, good fortune regarding health relative to opponents’ problems, and leaning heavily on an other-worldly start by Wilson.

Also also: Letting go of an All-Pro player with tread on his tires and fire in his heart, while lacking adequate replacement.

All of those favorables crashed Sunday, right in front of, and partly owing to, the return of the outcast, Earl Thomas. The Baltimore Ravens’ 30-16 triumph (box) was a far more civil, comprehensive and disturbing statement about Thomas’s departure than an obscene gesture.

As stunned, soaked members of a once-raucous sellout crowd shuffled to the Clink exits during garbage time, Thomas and his fellow defenders danced along the sidelines, then clambered upon the team benches to pose for a  celebratory group photo.

They had come to Seattle and not only convincingly beat the Seahawks, but humbled Wilson’s game, and vaulted their own guy, the remarkable Lamar Jackson, into the position Wilson vacated — leading candidate for the NFL’s most valuable player award.

“Very satisfying,” said a joyous Thomas, who was in on five tackles, including two solos, but had no other stats. “Just to come here where I started, and to get this win like that — we dominated too. It felt really, really, really good.”

As the game ended, Thomas rushed onto the field and greeted numerous former  teammates with friendly words and hugs, then found good friend Wilson near midfield for several minutes of warm conversation and an exchange of signed jerseys.

In the milling crowd, Thomas passed within a few feet of his former coach, Pete Carroll. No glances or words were exchanged. They were headed in opposite directions.

Perhaps as were their teams.

No, the outcome doesn’t mean the Seahawks necessarily are going to crash and burn. But there’s no getting around the fact that they lost decisively at home to the two best teams they have played, the Ravens and Saints, and beat a sliding Rams outfit by a point.

Sunday, they lost to a team playing almost exactly in the style Carroll wants his team to play, and did from 2012 to 2016 — an aggressive, opportunistic defense joined with a run-heavy, clock-eating offense that wears down opponents emotionally as well as physically (as in the Ravens’ nine-minute drive in the fourth quarter for a field goal to seal the outcome). But Sunday, the Seahawks were little match for their mirror image.

The one distinction is Jackson, 22, who impacts a game like no other current quarterback, and only one other in the game’s modern history — Michael Vick.

He was as advertised, only more so. In my time covering the Seahawks, I haven’t heard such astonishment over an opposing player.

“He’s totally unique, and they know it,” Carroll said. “He was phenomenal . . . he’s faster than he looks.”

Said DE Jadeveon Clowney: “He’s on a whole different level. He’s in a lane of his own. He can make anything happen for that team. He was better than us today. He won the game for them.”

DT Poona Ford: “I’ve played against a lot of running quarterbacks. He’s very different. I definitely think he’s a generational player in this league. I see why people hype him.”

LB Bobby Wagner: “A lot of people don’t respect his ability to throw the ball. He’s a really good thrower. Combine that with his running and it makes it really tough.”

Beyond his physical traits, in his second year he’s exuding a command that created the decisive sequence of the game. With words, not deeds.

The game was tied at 13 early in the third quarter when the Seahawks chickened out of a fourth down and three at the Baltimore 35-yard line and opted for a 53-yard field goal in the rain, which Jason Myers missed.

The Ravens trudged away for 10 plays until bogging down at the Seahawks 8-yard line at fourth and 2. As the field goal unit trotted onto the field again —  the first two times, the Ravens’ field goals accounted for their only offensive points in the first half — Jackson said hell no and marched to the sideline.

“I’m like, this time we ain’t kicking no field goal,” Jackson said, “because Russell Wilson is getting the ball again, and if we don’t score (a touchdown), it might look ugly.”

Jackson burst over right tackle for the first down, and a touchdown. The score with 90 seconds left in the quarter sealed the game. For the fourth quarter, there would be no Wilson magic.

He was frequently on the run and throwing off-balance more often. He finished 21 of 40 for 241 yards for 65.2 QB rating and, most egregiously, his first interception of the season — a horrible, double-pump to the flat aimed for Jaron Brown in the second quarter. CB Marcus Peters, the former Washington Huskies star acquired during the week in a trade with the Rams, picked it easily and went untouched 67 yards.

“Just made a bad play,” Wilson said. “Just disappointed. A good player over there. He made a good play.”

Wilson entered the game with 207 pass attempts in a row without an interception, but this one was so bad any NFL player could have snatched it. But it was one play; a more troubling trend was that he was hit seven times by a blitzing Ravens defense that often had its way with a Seahawks line that had two subs, LT George Fant and RG Jamarco Jones, starting for a second week. The Seahawks also surrendered seven tackles for loss.

“Obviously, Russ got hit quite a bit today,” said C Justin Britt. “We have to do better.”

So does the Seahawks defensive line — after not sacking Cleveland’s Baker Mayfield the previous week, Jackson went down once for a two-yard loss.

Overshadowed last week by the storyline of the return of Thomas were some hard truths about the Seahawks. They have holes, under-performers and needs that were exposed by a quality opponent. For the curious: The NFL trade deadline is Oct. 29.

As the Seahawks prepare to head to Atlanta for another supposed softie, the 1-6 Falcons, beaten Sunday 37-10 by the Rams, Britt tried for positive spin.

They will have to attempt that feat in the time when there is no more getting away with everything. 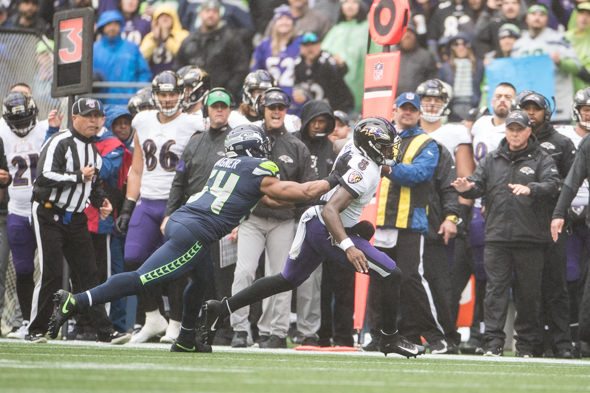