For the second week in a row, Seahawks endured a sack skunk. But Pete Carroll insists the rush is not as bad as the numbers make it appear. 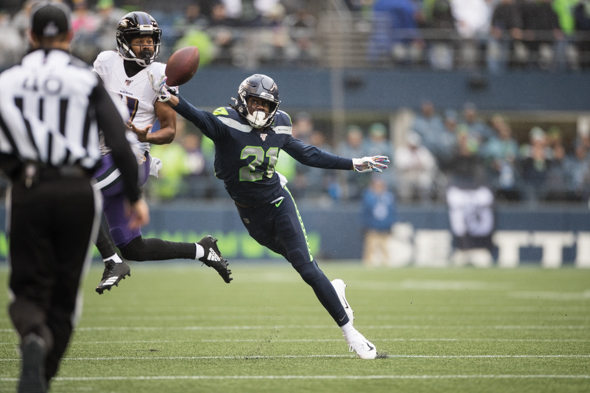 For those following the major sub-plot Sunday from the Clink stands, where the whole field can be seen, the verdict likely was unanimous. Earl Thomas wasn’t the same. His famed lateral speed was reduced, and his tackling aggression seemed diminished. On one first-half play where he set up as usual, alone in the final third, he turned to head downfield by himself, tripped on his own feet and fell flat on his face.

The point here is not to knock Thomas in his new gig with Baltimore. As he himself knows, it takes a long time to get back to top form after breaking a leg. Concurring would be WR Tyler Lockett, who broke his leg in 2016 and wasn’t his old self until 2018. He played in all 16 games of 2017, but he wasn’t the same.

The point is that had the Seahawks signed Thomas to an extension, the defense in 2019 would not be better. Some coverage mistakes might have been averted via his experience, but this season he’s not the defender he was.

Nor is the Seahawks defense close to the same.

In the absence of their their two best pass rushers from 2018, DE Frank Clark (trade) and DT Jarran Reed (six-game suspension), the Seahawks would be as well off to yell, “Boo!” to improve their paltry pressure numbers.

Sunday, for the second game in a row, they didn’t get a sack. Granted, the Ravens’ Lamar Jackson is sufficiently quick and fast to never get hit in a game of laser tag. And yes, the stats show a sack, but that’s only because Jackson slipped and fell on the wet surface behind the scrimmage line and was tapped by DE Branden Jackson.

The previous week, the Seahawks had no sacks or hits on Cleveland’s Baker Mayfield. For the season, the Seahawks, according to a stat tracked by Pro Football Reference called QB pressures (sacks, knockdowns and hits), are 28th in the NFL with pressures on just 16.7 percent of opponent pass attempts, and 26th in sacks alone (11).

And Reed was back Sunday, playing 50 of 59 snaps. Granted, the defense was missing to injury three starters, DE Ziggy Ansah, and safeties Bradley McDougald and FS Lano Hill. Whatever the reasons, the rush shortfall helps limit production of turnovers, which proved decisive Sunday in the 30-16 loss to the Ravens, who turned two turnovers into defensive touchdowns while Seattle obtained no turnovers.

Nevertheless, while lamenting losing out on turnovers, coach Pete Carroll was relatively sanguine about the pass-rush paucity.

“This is something you guys (media) are going to worry about a lot more than I am, really,” he said his Monday afternoon presser. “That number isn’t going in the right direction . . . We’d love to get more sacks. We’d love to have more hits on the quarterback whenever, because that gives us the ball, for the most part.

“There were like, two plays in the passing game (50 and 33 yards), and the rest of it was really well done by our guys making plays, getting good disruption out of it. We broke (Jackson) down and knocked him out of his spot. That wasn’t the best thing that can happen, but you needed to do it. You’ve got to go after him and change the rhythm.”

Jackson’s escapes shredded the Seahawks, especially on two critical third downs when he responded with runs of 13 and 30 yards. But it could also be that neither the Seahawks nor any other defense can counter the breakaways of perhaps the fleetest man ever to play quarterback well in the NFL.

Carroll remains steadfast in the belief that the return of Reed and Ansah (ankle) and the increased comfort of newcomer DE Jadeveon Clowney will improve improve the rush sooner than later.

“We’re on it,” he said. “The acceleration of this should go light speed. We should be able to roll. I couldn’t be more fired up that (Reed) came back like he did, performed like he did, and felt like he did coming out of the game too. So, it’s as positive as we can get.”

The same is true for all the Seahawks youngsters who’ve made early mistakes.

“It’s hugely important that you maintain balance through the schedule,” he said on his Monday radio show on ESPN 710. “Whatever the pundits want to say, they don’t know, let them take a shot. We have to stay within our four walls and get better.

“This team is going to get better. There’s too many young guys contributing; they’re going to improve, particularly the next four or five games.”

The Seahawks record in December tends to back Carroll’s contention. Enduring the learning curve early is always a chore. A least, they no longer have to face Jackson, nor talk about Thomas.