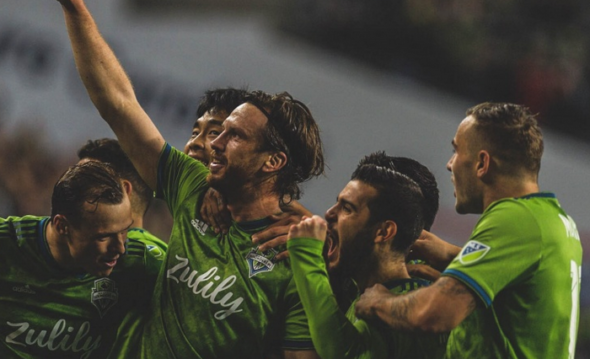 The Sounders scored first with a set-piece header from Gustav Svensson. / Gerschon, SoundersFC

Against the Seattle Sounders in the MLS Western Conference semifinals Wednesday night, Real Salt Lake goalkeeper Nick Rimando turned in another legendary performance — the final one of his 20-year career. It was undone, however, by a goal from Gustav Svensson to propel Seattle to a third conference final in four years.

Svensson’s header in the 64th minute was the decisive stroke in a 2-0 win over RSL in front of a CenturyLink Field crowd of 37,722.

No. 2-seeded Seattle advances to meet the winner of the other West semi between No. 1 seed Los Angeles FC and No. 4-seed LA Galaxy Thursday  (7 p.m., ESPN) next Tuesday. If LAFC wins, the match will be played at Banc of California Stadium in Los Angeles, while a match against the Galaxy would take place at the Clink.

Rimando is the MLS record holder for appearances, minutes played, saves, wins and shutouts. Beyond the quantifiable, however, he has made a career of defying expectations and gravity, soaring to the upper corners to turn away sure-thing shots despite his 5-foot-9 frame.

Wednesday night started out with an indicator that the keeper, who announced in March that the 2019 season would be his final campaign, was set for another night of frustrating Seattle’s chances. Five minutes in, Nicolas Lodeiro fired a shot into the woodwork near the upper right corner of the net. Rimando leapt and nearly reached the ball, covering the exposed portion of the goal.

King Gustav flicks in a header for the first goal of the night! 😍#SEAvRSL | #MLSCupPlayoffs pic.twitter.com/xtk64Bsrqj

Real Salt Lake held the ball throughout the match but failed to do anything convincing with it. With 61.4 percent of the possession, the club was out-shot 20-7 by Seattle, including a 10-1 advantage in shots on goal.

“Soccer is a weird game,” Sounders head coach Brain Schmetzer said. “They had all the possession. We were a little upset with that in the first half, but we created the better chances. We came out in the second half and and created a little bit more possession than what we had in the first half.

“(Lodeiro’s) delivery and Gustav’s header is the thing that really broke the game open.”

Moments before the opening goal, Rimando added another spectacular save, tipping a flicked Cristian Roldan header just over the crossbar.

As Lodeiro teed up a corner just past the hour mark, Svensson, a defensive midfielder, raced toward the ball and redirected it from the corner of the six-yard box to the near post, beating a diving Rimando.

The goal was Goose’s sixth for the club and second in the playoffs. Schmetzer praised Svensson’s play on both sides of the ball.

“His role on the field is to be the guy who breaks up plays,” Schmetzer said. “I think his defending, his toughness, his determination, all of those things are very vital for our squad. On the field, in the attack, he likes to spray diagonal balls. He’s dangerous on set pieces. We saw that tonight.

“He scored tonight, he had an assist to Jordan Morris the other night (against FC Dallas) on a set piece. He brings a lot to the team.”

Down a goal and with no second leg to fall back on, Real Salt Lake was forced to commit numbers forward. The tactic left them vulnerable on the counterattack, leading to a long ball to Raul Ruidiaz in the 81st minute. The forward cut the ball back to Lodeiro and the Uruguayan struck the ball with his first touch from 18 yards out, curling it past Rimando’s fingertips and into the far side net.

Whereas Svensson’s strike had disrupted the rhythm of Rimando’s sendoff performance, Lodeiro’s smashed the orchestra. Rimando, reduced to a solo act, carried on.

Even after being reduced to 10 men when Everton Luiz was sent off in the 83rd minute for a studs-up challenge on Svensson, Rimando continued to deny Seattle. The keeper made one final save against Victor Rodriguez to round out his career.

“He kept them in the game for long periods of time,” Schmetzer said of Rimando. “Even at the end, Cristian (Roldan) had gotten around the corner a couple of times and maybe could have had a third goal. He kept them at 2-0.

“Nick’s been talked about a lot. This is his retirement year. I wish him the best. He’s been a fantastic goalkeeper for this league and for his club.”

Rimando revealed after the match that he has played the majority of the 2019 season with a torn rotator cuff. Despite being bested by Seattle’s free-flowing attack, the keeper proved one final time that, even when reduced, Rimando seemed to make the impossible seem pedestrian.