The NFL trade deadline is 1 p.m. Tuesday, and Pete Carroll didn’t sound optimistic. The secondary, young and injured, could use a guy who knows what he’s doing. 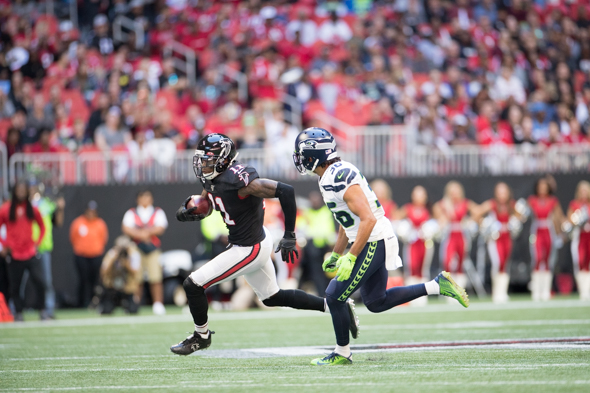 Pete Carroll answered in a light-hearted manner. But as is often the case, truth lurks beneath the humor.

To the question of whether the final hours prior to the NFL’s trade deadline at 1 p.m. Tuesday was going to be hectic, the Seahawks coach answered, “I don’t think it’s going to entertain me as much as I would like. It seems kinda quiet. As much as we worked to get to this point, we’re kinda hoping things start picking up a little bit.”

It’s always possible he was sand-bagging reporters at his Monday presser, but it’s more likely he sees what many others see with his team: A flawed outfit that nevertheless has worked its way to 6-2 and, with another player or two from the outside, might out-slog the other NFC sloggers into the playoffs.

Midseason is a tough time to fix an NFL team, but the Seahawks did all right with RB Marshawn Lynch and LT Duane Brown. And they already made a move last week, trading a draft pick to Detroit for safety Quandre Diggs.

Unfortunately for the Seahawks, he came with a limp.

Carroll appeared to say the Lions offered up damaged goods.

“He had a hamstring (strain) that he came to us with,” Carroll said. “He had played with it. We uncovered that we needed to take care of him to get back fully.”

Usually in trades, there’s no post-deal “uncoverings” because the rules say no trickeration when it comes to the health status of players. Carroll didn’t indicate anything was untoward, but their intent was to have Diggs play in Atlanta Sunday.

It certainly seemed wise, since safeties Bradley McDougald and Lano Hill were out with injuries, and the Seahawks ended up surrendering 460 passing yards to a backup quarterback who hadn’t started a game since 2015.

Now you understand why Carroll seeks to be entertained.

“He’ll be running around this week,” Carroll said. “Last week was very controlled. We’ll see how far he can go. I can’t say that he’s for sure back this weekend.”

Those who have followed the saga this season know that patching the hole left by the trade of Frank Clark became the No. 1 personnel priority. Not only was Clark gone, the Seahawks needed a big pass rush to help backfill the crater left by the departures of Richard Sherman, Earl Thomas and Kam Chancellor.

No sensible person expected the fix to happen in one season. But when a damaged team like Atlanta can whip up 383 yards in a half, an emergency is upon general manager John Schneider. Hence, the Diggs trade and the lust for more help. The pass rush, already heavily invested, must make do.

Carroll owned up to the the fact that the secondary’s inexperience, combined with numerous injuries that included senior eminence Bradley McDougald, were limiting what the Seahawks can do in pass coverage.

“At times, it could,” he said. “I don’t feel like we’re that far down. At times it does, yeah. Guys have to know what they’re doing. You can’t do some special things that comes from years together.

“When Bradley is playing, we’ve done a lot of stuff with him, moving him around. We can do more things with him. In that regard, it does restrict you. You don’t have the guys available that have the background.”

Falcons QB Matt Schaub took advantage of the Seahawks’ directive to never get beat over the top to throw underneath to WR Julio Jones and friends. Jones caught 10 balls for 152 yards against the backup secondary that was also without starting CB Tre Flowers (neck).

Carroll sounded optimistic about the returns to health Sunday for Flowers and McDougald. Rookie FS Marquise Blair made a big impression with 11 tackles and a critical forced fumble. Since the other cornerback, Shaquille Griffin, is having a breakout year, those four would represent the best assemblage of secondary talent the Seahawks have put together in 2019.

But besides seventh-year pro McDougald, the others are third-year or less. Thus a Legion of Whom inherits the legacy.

Good as Blair is, with his Thomas-like aggression, Carroll knows the free safety job is as much about understanding where the offensive threats will come as it is chasing them down.

“He’s got a lot of the details to clean up,” Carroll said. “Just continue to get better. He’s certainly a ballplayer; you can see that.”

Carroll and the Seahawks are counting on the young guys, in the secondary and throughout the roster, to come up big in the second half. It is the custom.

But the reality right now is Carroll wants Schneider to entertain him with another guy who knows what he’s doing. This time, not including a limp.