Thiel: In the NFL, when it goes, it goes fast

Seahawks go from nearly the easiest schedule to, in the second half, NFC’s hardest. Things change fast in NFL. Ask Tedric Thompson, who has a shoulder problem (?). 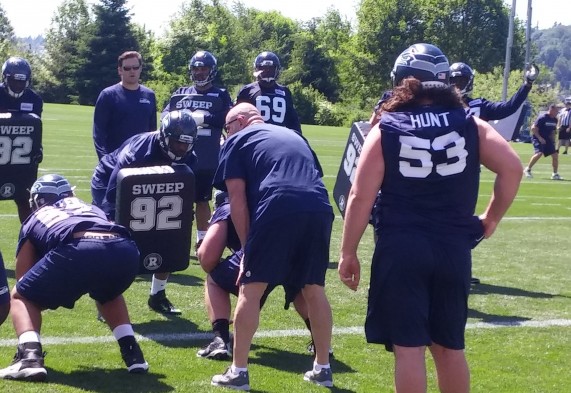 One of the most remarkable things about the NFL is how swiftly things that seem solid turn to pudding.

Look at the 1-7 Atlanta Falcons, who blew a 28-3 lead and lost a Super Bowl to New England two years ago, and now the franchise’s bones are bleaching in the Georgia sun. Consider the undefeated San Francisco 49ers this year, coming from the latest (4-12) in a string of reliably wretched seasons to instantly become the early-1990s Dallas Cowboys.

Even within a game, things go from gold to goo. Six plays into the doings in Atlanta Sunday, C Justin Britt, as bedrock a figure as the Seahawks have, starting 86 of 87 games since 2014, gets bent the wrong way, tears his ACL and is done for the season. Maybe even his Seattle career, since his contract is running out.

So backup Joey Hunt, a fourth-year guy with three spot starts, ambles into the huddle knowing abruptly that this likely is his gig for the rest of the season.

“You don’t really expect something to happen early,” he said. “Usually, you think towards the end of the game.”

As all eyes meet Hunt’s, QB Russell Wilson senses the unease and says, “Y’all know Joey’s got this, right?”

Right. The Seahawks score on four of their first five possessions and, with a 24-0 lead, have their best offensive first half of the season.

Then comes the whipsaw. The offense soils the sheets and musters one field goal in the second half. Seattle manages to hang on for a 27-20 win, but how did everything turn to pudding?

Then there’s Wednesday at Seahawks headquarters. Coach Pete Carroll informed the media that FS Tedric Thompson, the starter for six of the season’s eight games, who played Sunday and “did fine,” according to Carroll Monday, was put on the injured reserve list and will have shoulder surgery to repair a torn labrum.

Despite never having appeared on the weekly health-update list, Thompson is suddenly done for the regular season, since IR is an eight-game minimum stay. Did he get hurt falling down the depth chart?

“He’s had a shoulder that’s been bothering him for some time,” Carroll said with an expression as stoic as he could make it. “We’re going to get him fixed up.”

Asked whether the lingering injury was something Carroll felt he didn’t have to include on the league-mandated report, he said, “He’s just been . . . last year or something like that. He had something that he was concerned about. This week, it just went. We have to fix him up.”

Carroll didn’t mention that he might need a roster spot for the return from the injured list of TE Ed Dickson, who is likely to play Sunday against Tampa Bay at the Clink (1:05 p.m., FOX). Nor did he mention that rookie Marquise Blair, a second-round draft pick, started at free safety in Atlanta and led the team in tackles and made the game’s key play, forcing a fumble at the goal line.

Nor did he mention that Seahawks’ pass defense is one of the NFL’s worst, nor that newcomer FS Quandre Diggs may be ready to play and Bucs QB Jameis Winston is tied with Baker Mayfield for most interceptions with 12.

But somewhere in this mix is an explanation for why Thompson went from fine to pudding in two days without playing.

It also speaks to the urgency Carroll feels about the season’s second half, which Seattle enters 6-2 thanks in no small part to good fortune and the weakness of the schedule. That changes harshly.

The combined record of the remaining opponents is 38-21-1, if the unbeaten 49ers are counted twice (Nov. 11 and Dec. 29). According to playoffstatus.com here, it’s the toughest remaining slate in the NFC.

Carroll knows well how vulnerable the Seahawks are, which inspires manipulations of the roster that couldn’t be improved at the trade deadline Tuesday.

“We’re not a finished product,” he said. “We’re still working at stuff, and we’re trying to find our way in some areas and make sure that we’re really moving forward.”

Since the midpoint is always the favored time to look ahead after knowing a few things, here’s one guy’s guess how Carroll’s efforts at moving foward will play out, including the current records of Seattle opponents:

That makes for a 4-4 second half and a 10-6 finish, which most years is good for a playoff berth. One potential break for Seattle is the possibility that if the 49ers stay hot, they may clinch the NFC West division title ahead of the second Seahawks game, which could mean they will hold back some starters ahead of the playoffs.

I’d say this a solid forecast. So around Christmas, count on figgy pudding.