Russell Wilson accounted for 187 yards on the Seahawks’ final three possessions in the 40-34 win over Tampa in OT. With a lame defense, miracles are mandatory. 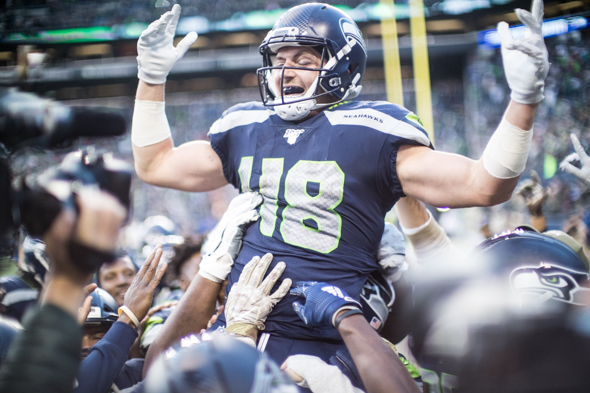 In terms of mastery of craft, the Seahawks quarterback is approaching a level of enlightenment that is thrilling to the point of chilling.

On the final three possessions of a preposterous 40-34 overtime win over Tampa Bay Sunday, he took the Seahawks on scoring drives of 75, 48 and 70 yards. Except PK Jason Myers missed a potential game-winning field goal on the middle drive, necessitating the third drive in OT.

On those three drives, he completed nine of 13 passes for 166 yards, and added a 21-yard scramble — his only rush of the game — that might have been the most critical improvisation of the afternoon.

That’s 187 yards of offense that produced 13 points to beat the 2-6 Bucs, who probably thought they had won the game at any of a half-dozen junctures, especially since coach Bruce Arians was 4-1 at the Clink from a previous coaching life in Arizona.

If there was any question that Wilson is the leading candidate for the Most Valuable Player award, it vanished faster than one can say, “Jacob Hollister.” Wilson found one of Seahawks’ most obscure players twice for touchdown passes, including the 10-yard game-winner in overtime.

“You know,” said a grinning Hollister, “you have to expect (the ball) every play.”

Since it’s possible, seeing him week after week, year after year, to take Wilson a bit for granted, one of the beneficiaries of his largesse, WR DK Metcalf, shared a bit of post-game conversation he had with the other side, which explained part of why the Seahawks in the off-season made him the game’s highest-paid player.

“He tells me,” said Metcalf of rookie CB Sean Murphy-Bunting, “that I’m lucky I have a guy like Russ running the show back there.”

Wilson has floated an NFL-average team to 7-2 mostly on his absolute conviction and skill that the offense will score when it matters most. Doesn’t always happen, but the belief in him remains rock-hard around the team. When the coin flip for overtime was won, the game was bank.

“With Russell back there, it don’t matter,” said coach Pete Carroll, unleashing from the grip of grammar. “You have a chance no matter what’s going on. He played phenomenal football today.

“He’s done it so many times. You can’t have a better guy, almost in the history of ball, doing it.”

Some will challenge Carroll’s hyperbole. But Sunday, it was hard to argue with a passer rating of 133.7.

The Seahawks were up against the NFL’s top run defense, so more air ordnance was ordered up in the game plan. Against a team that blitzes more than any other in the NFL, Wilson delivered 29 completions in 43 passes for 378 yards and five touchdowns with no turnovers.

His counterpart, Jameis Winston, was nearly as good statistically — 29 of 44 for 335 yards and two touchdowns. But he had one error, which was hardly his fault.

With 10:48 remaining in a tie at 24, Winston dropped back on a third-and-five at Seattle 40 and was was bumped by his left tackle, Donovan Smith, who had been shoved by LB Mychal Kendricks. The loose ball, Tampa’s only turnover, was scooped by Seahawks DE Rasheem Green and returned 36 yards.

The possession produced a Seattle lead from a field goal, which began a fourth-quarter cavalcade of 29 combined points. Winston might have answered, but OT rules say first TD wins.

Despite being unable to draw from his holster, Winston was effusive in his praise of Wilson.

“I just have so much respect for that guy — he’s a winner,” Winston said. “He’s an amazing quarterback. “He’s been an amazing help to me with my development as an NFL quarterback. I just thank him for that.

“I wish we were on the winning end, but he went out there and did his job.”

As always, Wilson had sidekicks: WR Tyler Lockett had career highs in receptions (13) and yards (152), along with two touchdowns, and Metcalf had the best game of his rookie season with six catches and 123 yards, including a spectacular 53-yard TD. Against a stout run defense, RB Chris Carson had a surprising 105 yards in 16 carries, including a 59-yard run that went through four would-be tacklers. He also had two fumbles, one lost.

A partial reason for the gas-pump numbers were due to several in-game injuries that at one point had six rookies populating Tampa’s defense.

“To have the injuries we had at the last second and to take this team to overtime,” said Arians, “I’m really, really proud of our guys. I’m not used to losing here.”

All of Seattle’s firepower was necessary because the defense couldn’t keep up its end. A bad second half against Atlanta the previous week carried into Sunday, allowing in the  Bucs’ first four possessions hree touchdown drives of 75, 69 and 63 yards for a 21-7 lead.  Tampa’s 34 points were a season high against Seattle.

Through nine games, it hasn’t happened for the defense, despite Sunday’s debut of what figures to be the safety tandem of the near-term future, with rookie FS Marquise Blair joining veteran SS Bradley McDougald.

Another 418 yards surrendered says that if the Seahawks are to progress in the toughest part of the schedule, including a Nov. 11 Monday night game in Santa Clara against the undefeated 49ers, it will happen because Wilson wills it. Nor is it likely to be helped by Myers, who missed two field goals and an extra point.

“I want to say this: Jason is our kicker,” Carroll said. “It didn’t go right today for him, but it’s going to. He’s a magnificent talent. But we won anyway. Our guys won for him.”

As the media began entering the locker room, Wilson turned to Myers, who dresses next to him, and delivered a bro-hug.

A courtesy gesture, perhaps, but after watching Wilson on the final three Seahawks possessions, there figures to be a line of teammates seeking a laying of hands. 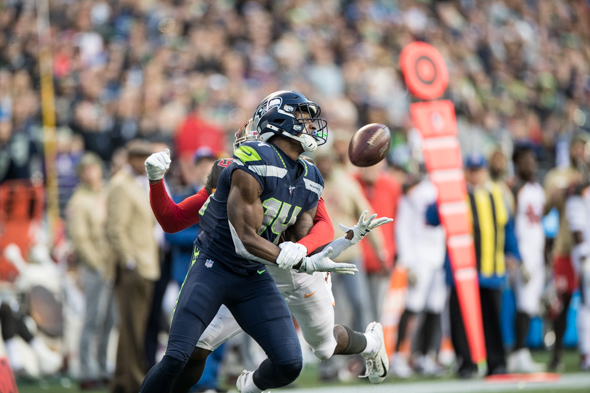 DK Metcalf had a bit of trouble getting to the ball through the grip of Tampa CB Jamel Dean. / Drew McKenzie, Sportspress Northwest