With a third MLS Cup appearance in four years Sunday, Sounders coach Brian Schmetzer can claim a rightful place among Seattle’s coaching legends. But he’s not buying it. 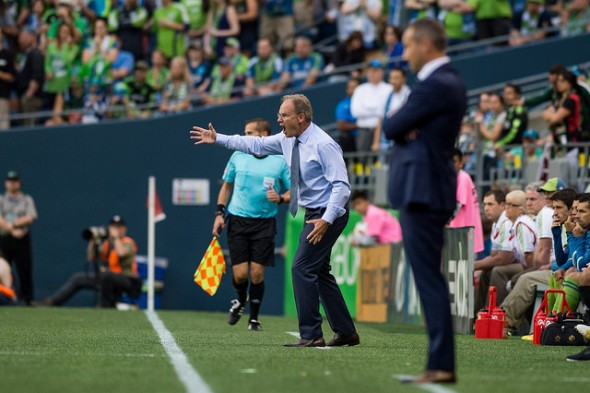 Coach Brian Schmetzer is rarely one to call attention to himself. / Jane Gershovich, Seattle Sounders FC

After the press gaggle ended at the Sounders’ Starfire training center in Tukwila Wednesday, Brian Schmetzer was walking back to the building when I suggested to him that what he has accomplished as Sounders coach — Sunday is his third MLS Cup appearance in four years — rates him mention among Don James, Lou Piniella, George Karl, Mike Holmgren and Pete Carroll in Seattle sports’ top modern-era coaching achievers.

Schmetzer, 56, remembers James, even though he coached his last Huskies football 26 years ago, when most of Schmetzer’s players were toddlers, or less. Schmetzer remembers a lot of sports here, including sneaking out of Nathan Hale High School to watch the parade downtown for the Sonics’ 1979 NBA champs. He was at the 2014 parade to celebrate the Seahawks’ Super Bowl triumph.

Which sets him apart from the coaching luminaries mentioned.

Unlike them, he’s a Seattle guy, down to the moss between his toes.

That’s no knock on the outlanders. Most sports fans think that local teams should pursue the best available talent nationally. Nor does it imply Schmetzer is superior to others here.

It’s just simple fact that a win Sunday will bring a degree of satisfaction and pride that, after almost 40 professional years affiliated in some way with the Sounders, the regional soccer community and Seattle at large, cannot be topped.

“It’s massive,” he said earlier to reporters. “Being a Seattle guy, I’m really proud of what the organization has accomplished.”

Begun in 1974 as an expansion franchise in the since-defunct North American Soccer League and launched from decrepit Memorial Stadium at Seattle Center, the Sounders and the soccer community have gone through a few iterations, good and bad. They put a lot of voting muscle behind the 1997 statewide ballot measure that funded the Clink, then had to wait 12 years for delivery of an MLS expansion franchise.

After that franchise engaged in remarkable run of playoff appearances in all 11 of its seasons, which included the championship in 2016, a grand emotional payoff looms on the home turf Sunday.

“Back in the 1980s, we had success,” he said. “(Coach) Alan Hinton started us off back in Memorial Stadium. There’s a long tradition of this being a successful franchise. Right now is a pretty high point for all of us who put in the work in the 70s and 80s, and the lean years of the early 2000s of the A League days.

“It’s a culmination for all those people who stayed here. The foundation for all of this excitement had been laid.”

When forced to talk about his career, Schmetzer, who joined the Sounders out of high school as a player in 1980 and became a regular by 1983 — the NASL’s final season before collapse —  is relentlessly deferential, to the point where one suspects he buys cars without horns.

“I had a couple of great mentors in Jimmy Gabriel and Hinton,” he said of his coaches in the early NASL days. Then he lauded the late Sigi Schmid, whom he succeeded in mid-season 2016 after a 6-12-2 start.

“Sigi was a massive influence on me — why did he do this, how did he do that, what would I do in his position,” he said. “All that experience helped me when I took over.”

To the world in 2016, it looked like the Sounders made the standard emergency half-step pro sports teams take in a midseason blow-up — promote the top assistant.

Then the Sounders won the title.

In 2017, they returned to the MLS Cup, losing to Toronto FC, the team they beat in ’16. And after Portland ousted Seattle in 2018, the Reds and Sounders play the rubber match of their remarkable series Sunday.

All with unprepossessing Schmetzer making the calls. Asked if he feels he gets enough respect, Schmetzer adopted a deadpan.

A little later, Schmetzer tried to pull away from the linkage with the Seattle coaching greats by suggesting he was bequeathed extraordinary player talent, which is largely true. As an example, the day after he replaced Schmid, the Sounders officially signed Uruguay native Nicolas Lodeiro, who became the club’s assist leader.

The Sounders added ace scorer Raul Ruidiaz from Peru to join local star Jordan Morris up top and longtime premier GK Stefan Frei in the back to form a formidable, sustainable enterprise, even if none among them was selected for the MLS Best XI this season.

But he still has to do it. Sometimes the most salient virtue in coaching is sensing when a good thing is imminent, and not screwing it up. I reminded Schmetzer of the famous dictum by baseball manager Casey Stengel.

“The key to being a good manager,” Stengel said, “is keeping the people who hate me away from those who are still undecided.”

It’s one of the toughest gigs in sports. Screw it up, and even your mother, wife and dog are a threat to walk away.