The Huskies defense allowed Oregon State eight yards in the second half, but the 19-7 win was muted by another another mediocre passing game from QB Jason Eason. 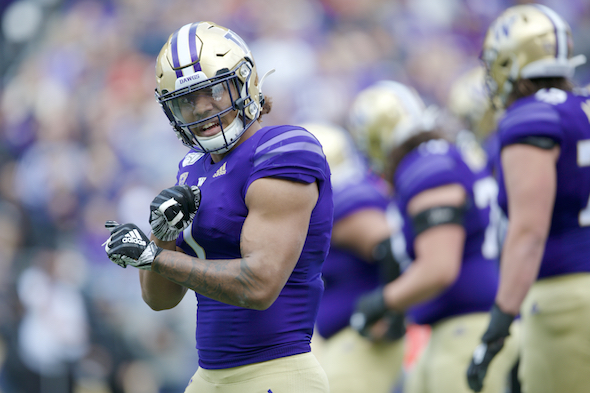 On a long, slow slide into ordinariness, the Huskies on defense worked up a glimpse for a brighter future Friday night in Corvallis. On offense, however, Washington looked as if the Cyler Miles era had fallen out of the back of a truck into full view again.

Because Oregon State (4-5, 3-3) was unexpectedly rancid, it was hard to know what to make of the of the 19-7 win (box), except that it was UW’s eighth straight in the series with the Beavers, and coach Chris Petersen set back a decade or two the career of his former assistant, Beavers coach Jonathan Smith.

Entering the game, the Beavers were leading the Pac-12 in third down conversions (49.6 percent), yet managed the feat once in 15 opportunities on third and fourth downs, and were outgained in yards 420-119. They scored 56 points last week against Arizona, yet were scoreless offensively against UW, managing six first downs and 41 yards rushing.

After giving up 399 yards to Utah and 434 to Oregon in their previous two games, both losses, it’s hard to imagine the Huskies defense turned formidable in a week. But it was the #Pac12AfterDark on Friday, where the inexplicable is normal. However mysterious, Petersen was amenable to the uptick.

“They were outstanding,” he said. “Oregon State has a good offense. The game plan put together by (defensive coordinator) Jimmy  Lake was awesome. They were really good at getting pressure on the QB.”

Ulofoshio, who came on in place of injured starter Brandon Wellington, led the Huskies with nine tackles, 1½ sacks and 1½ tackles for loss. Tryon seemed to be everywhere — seven tackles, two sacks and 4.5 TFLs.

“Joe is a long guy (6-5, 262 pounds) who has a burst off the ball,” Petersen said. “He creates problems for QBs. He can bend the edge, and he’s got a spin move. He makes QBs step up, so if we can get a push inside by the big guys, it’s a nice combination.

“Eddie’s done a great job. He’s a guy we’ve liked since he’s been with us. He brings great energy, he’s super bright and works his tail off. It’s starting to show up. The question he asks us in meetings, the work he’s done on special teams, it’s pretty impressive.”

The thin linebackers unit has been the defense’s prime weakness. To shut out the conference’s fourth-highest scoring offense (33 ppg) by giving up eight yards in the second half suggests that the last half of a non-championship season for Washington (6-4, 3-4) has some virtue in terms of player development.

But it’s hard to know whether that will be true for QB Jacob Eason.

He had his worst game as a Husky, against a unit that a year ago was arguably the worst in all BCS, and is upgraded only to mediocre now. A year ago, the Huskies beat the Beavs 42-23 after taking a 28-3 lead at the half. This time, the Huskies were up 10-0 at the half and 13-0 halfway through the third quarter when Eason induced panic among the purples with an interception returned by CB Jaydon Grant for a 36-yard touchdown.

It was the second pick-six in two weeks for Eason, who finished 16 of 32 for 175 yards, two picks and one TD, a 50-yard catch-and-run by TE Hunter Bryant.

“We were completely out of rhythm, for whatever reason, in the passing game,” Petersen said. “We had a chance to go deep with a 50-50 ball an we didn’t get it. We’re jumping too soon.

“I thought the run game did a nice job (245 yards on 48 carries) considering (OSU) was stacking the box so much because we couldn’t really throw it. I don’t know what was going on with that.”

Eason was wild, under-throwing and over-throwing his targets. He wasn’t helped by several drops. Only four receivers caught passes, just two of them wideouts.

With a second bye week at hand, perhaps there will be time for Eason to come to grips with his problems ahead of the final two games against Colorado and Washington State.

If he can’t dominate the Beavers defense, his presumptive spot in the first round of the NFL draft would appear to be on the slide too.