WR Josh Gordon has said and done all the right things in practice to merit a shot Monday night against the 49ers. Thereafter, as with all addicts, it’s one day at a time. 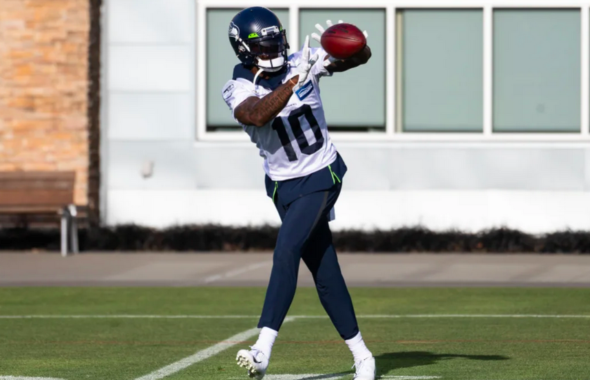 WR Josh Gordon got in his first practices this week with the Seahawks. / Rod Mar, Seahawks.com

As someone who has spent a good chunk of life dealing with addiction, WR Josh Gordon knows a little bit about hard tasks. So mastering a playbook from a new football team would seem a trifle. But that too is a lift.

“I’ve had to do it a few times with different coaches, different teams obviously,” he said Saturday after practice, his first media session since the Seahawks surprised the NFL this week by claiming him off waivers from New England. “It can be difficult. It can be hard on the fly.

“You want to be able to just move without thinking as much. Getting to that part of the game is the most important part for me.”

Getting smooth will take time. But first things first — getting on the field.

That looks like it will happen Monday night at Levi’s Stadium against the undefeated San Francisco 49ers.

“There’s a good chance,” coach Pete Carroll said. “He did really well. He was very impressive in terms of picking stuff up, studying overtime. He fit in really well. He’s a really good athlete.

“You can really tell that he’s got a lot of potential to be a big-time player. It was fun seeing him on the practice field. Did a nice job.”

Carroll wasn’t offering any when, where and how about Gordon’s deployment. But since since it doesn’t take much to master the intricacy of the command, “Y’all go deep,” he figures to be more than just a decoy.

“I’m not saying he won’t make an error here in something,” Carroll said. “He had no problem picking stuff up. Principles, concepts, terminology. He made great sense of it.”

The arrival of Gordon, 28, who was passed over by 27 teams before Seattle chose him, came about at least in part by a long-distance connection with Russell Wilson, who apparently lobbied for Gordon’s hire.

Gordon, a Houston native who played for Baylor and was drafted in the second round of the 2012 supplemental draft by Cleveland, said the relationship dated to 2014 or 2015.

“We kind of just kept tabs on each other from time to time, and mutually admired each other’s game, and saying what’s up,” he said. “That’s about it. We always talked football, and I think we built some type of relationship prior to me getting here. It’s pretty nice to have that.”

He’s had his eye on the Seahawks for awhile.

“I admire his game. I think maybe he respected mine mutually.”

Wilson said Friday that Gordon has been quick on the uptake.

“He’s been studying like crazy,” he said. ‘He sits up (front) and takes tons of notes. He’s highlighting like crazy. He’s in his playbook non-stop. He’s a true pro.  I think he’s really fired up to be here. We’re fired up to have him.

After suspensions and failed rehab attempts, the Browns traded him to New England in September 2018 for a draft-choice pittance. He caught 40 passes for 720 yards in 11 games for the Patriots in 2018, and in the first six games in 2019 had 20 for 287.

Asked if he was surprised to be cut by New England, where he was rumored to have been late to or missed some meetings, he said,  “I think so, but we all know it’s a business. Your time can be short lived anywhere. You never know what could happen day to day in the NFL.”

Carroll said earlier this week that a support system is in place to help Gordon. But that’s more or less true with every NFL team, because they have to protect the investment. But once a high-strung talent becomes negligent and potentially disruptive, Carroll has shown willingness to cut ties.

Asked if anything had surprised him so far, Gordon said, “The energy is high energy, all the time, everybody. Top to bottom, all across the board. Offense and defense. Staff. I think I love it.

“I’m just grateful to be here.”

When you’re allowed into the Last Chance Saloon, gratitude is an easy attitude. Comes now the hard part — staying sober and on time.