Pete Carroll’s psychology skills paid off Monday in coaxing a clutch performance out of Jason Myers after the kicker had a bad game the previous week against Tampa Bay. 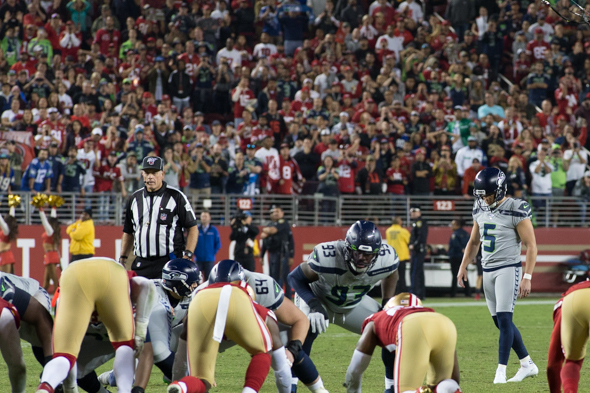 The football moment gets no harder for Jason Myers: A last-second kick to win the game against the arch-rival on Monday night after a bad game the previous week. / Drew McKenzie, Sportspress Northwest

But the latest two weeks of evidence may require a modest change in the sacrament:

Sometimes you can’t win it in the fourth quarter, either. So do unto yourselves a blessed kicker,  for he shall inherit the overtime.

A week earlier, most fans wouldn’t have suggested that blessed kicker was Jason Myers. His missed extra point and two errant field goal attempts against Tampa Bay forced the Seahawks into OT to beat a 2-6 team. At home.

But instant skepticism about player performance is why fans don’t coach football and Pete Carroll does. It’s part of why the Seahawks are 8-2, looking up and flourishing, and the 49ers are 8-1 and looking back and vulnerable.

In the 27-24 overtime win at San Francisco Monday, Myers twice was asked in pressure situations to deliver. The gulps heard collectively around the Northwest caused animals to seek shelter.

With 1:45 left in regulation tied at 21, Carroll debated, at fourth-and-2 at the 49ers 28-yard line, about whether to go for it. Instead, he trusted Myers, who delivered the lead from 46.

The 49ers responded with their own kicker, rookie free agent Chase McLaughlin, who hit his third field goal of the day (43, 39 and 47 yards) to send the game into extras.

Both teams swooned and staggered scorelessly through the OT, including, with 3:10 left, a miss from McLaughlin from 47 after Carroll used a timeout to ice him.

McLaughlin, signed earlier in the week to replace injured veteran Robbie Gould, 36, choked left so badly the ball wound up in one the tunnels at Levi’s Stadium.

Um…. this is not where the ball is supposed to go. pic.twitter.com/Ie5EfA9Mq8

“He was a new kid, you know, and they were asking him to do a lot,” said a grinning Carroll post-game of the decision to expend a precious timeout. “It gave him an extra couple seconds for him to think about it. (The field goal) didn’t happen.

“We’ve seen that before. We’re not afraid to see a missed kick right there.”

Then it was Myers’ turn, after a great drive put the Seahawks in position for a kick from 42 yards with :04 left in a howler of a game on Monday night national TV.

“That doesn’t get tougher,” Carroll said on his ESPN 710 radio show Tuesday morning. “Not wanting to have the game that he had (the previous week). And here he is again, having to come through. He nails one, but they call timeout (just before he kicked), which was awesome.

“Then he nails the game-winner.”

Immediately after the Bucs game, Carroll went into damage control, going out of his way to express confidence in Myers, a five-year vet from Marist who kicked previously for Jacksonville and the New York Giants. Teammates followed suit.

“I was so proud of him,” Carroll said. “It was such a good moment for him and our team. Everybody really stepped to the front and supported him last week. That was the hard time to do it. It’s easy to go cheer for him his week.”

Post-game, he was lifted on the shoulders of his teammates. In the locker room, Carroll has a ritual of calling up players who performed well.

“We made a big deal about it,” he said. “He apologized for last week. They booed him out — there was no way they were going to accept his apology.

“It was a really, really good moment for Jason and our football team. People of good faith can come through and do great stuff.”

Carroll’s message of positivity is well-established for all players, but the approach is critical for kickers, nearly all of whom at this level have strong legs and good mechanics. The difference among kickers is between the ears, where Carroll likes to hang out.

The difference worked to thwart McLaughlin, salvage Myers and win again on Monday night, where the Seahawks improved to 25-10, a winning percentage of .714. That’s tops in the NFL since the MNF franchise began in 1970. Carroll is 28-5-1 in prime time since he took over in 2010, 9-2 on Mondays.

The power of First Carrollians must never be taken lightly.

Lockett likely to be OK

The Seahawks’ bye couldn’t be better timed for WR Tyler Lockett, who was to stay a second night in Stanford hospital after taking a serious blow to a shin that knocked him out of the game Monday.

“He’ll be there again tonight just for precautionary reasons,” Carroll said at his Monday afternoon presser. “He’s better than he was yesterday. Our people think he’s going to be fine to play. He’ll need the rest of this week to make sure everything goes away. He should be fine to play next week.”

The swelling was sufficiently swift and sizable that Lockett was taken to the hospital right after the game.

“I think they call it compartmental issues,” he said. “It’s the swelling from the contusion that he had just to make sure that there’s no problems.”