Amazon’s Jeff Bezos is said to be fishing in NFL waters, wanting a team. Seahawks are said to be not for sale. But with a worth of $109 billion, what isn’t for sale? 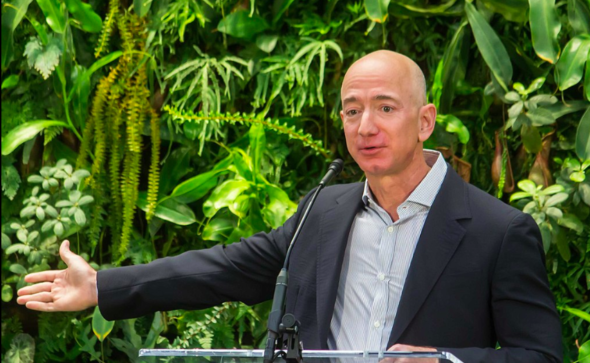 Jeff Bezos, at the opening of the Amazon Spheres downtown, may want to open shop in the NFL. / Seattle City Council

Well, who wouldn’t want a zippy drone delivering a kale/arugula smoothie from Whole Foods to your seat at the Clink, then after the Seahawks game, take a Blue Origin space shuttle into low earth orbit to beat the Seattle traffic?

All this and more can be yours, 12s, once Jeff Bezos buys the Seahawks.

That possibility arose this week when CBS Sports Sunday and the Washington Post Thursday published stories speculating that Bezos has interest in buying into the NFL, and the NFL would warmly embrace the king of Amazon.

Both stories made the obvious connection to the Seahawks, the team of Bezos’s adopted hometown. But no one around the club has given any indication that Jody Allen has any intention to sell the club she inherited from her late brother, Paul.

When it comes to sports teams, including ownership of the NBA Portland Trail Blazers, Jody Allen has kept the lowest profile. She emerged publicly just once, raising the 12s flag before the game against the Los Angeles Rams last month, when Paul was inducted into the team’s Ring of Honor.

She has given no media interviews. Seahawks coach Pete Carroll, who signed a two-year contract extension in December, has been nothing but positive about her time as chair of the team, an asset in the Paul G. Allen trust.

“We had one really significant meeting, a couple of talks, and she has been really excited and really fired up about doing this,’’ Carroll after the extension was signed. “And anybody that’s a 12, that cares for the Seahawks, would be really fired up about how she is looking at this and how she wants to go about it. She’s got a great love and spirit for the area and the club.”

Of course, that was then. This is now. When the richest man in the world — actually, it’s a tie at $109 billion with another Seattle guy, Bill Gates, according to Bloomberg — comes knocking, things can change. Ask the NBA, when the Los Angeles Clippers weren’t for sale until another Seattle guy, Steve Ballmer, No. 17 on the Bloomberg billionaires list, wrote a $2 billion check in 2014 to Shelley Sterling, wife of exiled disgrace Donald Sterling.

Since the Allen empire doesn’t need the money, and Jody seems to enjoy captaining the ship, Bezos may have to look elsewhere.

Perhaps to his next adopted hometown, Washington D.C., where the NFL has a similar knucklehead problem as the NBA did with Sterling. The 20-year stewardship of Daniel Snyder has wrecked a once-great franchise, and NFL owners would love to see him cashed out.

The Post, which is owned by Bezos, quoted a team spokesperson saying the team is “100 percent not for sale, and Daniel Snyder is not looking to sell any portion of the team.” The spokesman added that Snyder “has not seen Jeff Bezos in a decade.”

Bezos is building a mansion for himself in suburban Virginia, where Amazon’s second headquarters is being developed. Given how his company had its ears boxed in Seattle’s recent city council elections, where a pro-business slate of candidates funded by Amazon largely was rejected, he may be tired of Seattle’s lefty political climate.

As is often said in big business, nothing is for sale until it’s sold. Dan, meet your neighbor, Jeff.

Unlike Ballmer, Bezos has never publicly expressed a desire for pro sports ownership. But Bezos, who was recently divorced from wife Mackenzie, has been seen circling the NFL circus. He was seen in the suite of NFL commissioner Roger Goodell at the Super Bowl, and he was spotted in August at the annual Hall of Fame ceremony Canton, OH.

This is where the story gets interesting.

According to the CBS Sports story, Bezos was there because his girlfriend, Lauren Sanchez, wanted to celebrate the Hall induction of her old boyfriend, TE Tony Gonzalez. The couple dated when Gonzalez was a rising star with the Kansas City Chiefs, who took him with their first pick in the 1997 draft. Together, they had a son, Nikko, who, now 18, also attended the ceremony.

Nikko also has a godfather of some note — the Chiefs’ second-round choice in that same draft, a wide receiver by the name of Kevin Lockett. He’s the father of the Seahawks leading receiver, Tyler Lockett.

I’ll repeat after you: Small world.

Where all this leads is unknowable, except the part about the NFL’s interest in having Bezos in the tent of ownership. Said  Cowboys owner Jerry Jones in an October interview: “Someone like that, I’d carry him piggyback to get him to the NFL.”

The franchises in Seattle and Washington are said to be not for sale. Nor are any others known to be for sale. The last one was Carolina, for $2.3 billion 2018.

But when Bezos wants something, he’s probably an Amazon Prime member. Delivery in a day.