Once NFL darlings for beating the Patriots, the Eagles are now stale. Meanwhile, the 8-2 Seahawks continue to make over the secondary. Ugo Amadi, come on up. 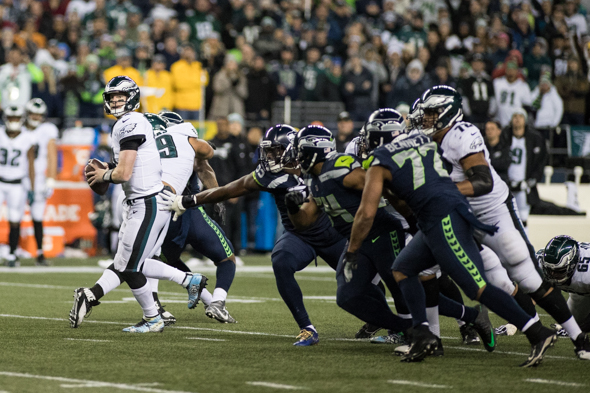 In the last meeting between the Eagles and Seahawks Dec. 3, 2017 at the Clink, won by Seattle 24-10, Eagles QB Carson Wentz was the object of much attention from the Seahawks defense, which sacked him three times. / Drew McKenzie, Sportspress Northwest

Remember when Philadelphia Eagles were the trendiest thing in the NFL? Me, neither.

The Eagles, whom the Seahawks play in Philly Sunday (10 a.m., FOX), were immediate national darlings when they smited Emperor Palpatine and his Storm Troopers in Super Bowl LII.

In winning 41-33, Philly got away with using a backup quarterback, went for it regularly on fourth down and deployed the “Philly Special” trick play for the dagger into the Imperial gut. Fun. Coach Doug Pederson came from nearly nowhere (Ferndale, WA) to Dick Vermeil status.

But in 2019, they are 5-5, in the lint-filled bellybutton of the NFL’s giant midriff, and no longer cool. It goes fast in the NFL.

The Eagles looked Sunday as if they might have another breakthrough game against the Patriots, going up 10-0. But they didn’t score a point over the final 42 minutes, even with a healthy Carson Wentz at quarterback, and lost 17-10.

In the NFL, it goes poof quickly.

“You have to always stay one step ahead of the posse, if you will,” offensive coordinator Mike Groh told the Philadelphia Inquirer this week. “Whether you’re talking about those critical situations, or your general offensive structure. (You’re) trying to do things differently, but still maintain the same order for the guys who are here, so that you’re not remaking yourself all the time.

“You have to find new and fresh ways to do old things.”

Sort of what Pete Carroll is trying to pull off in Seattle. At 8-2, the Seahawks, are a likely bet to make the playoffs for the eighth time in nine seasons, but this time without many of the legends of yore, such as Marshawn Lynch and the Legion of Boom.

Wednesday at the VMAC, Carrol cited the poof of the Eagles, although he tried to backpedal.

“They have a lot of similar players still, a lot of familiar guys from that time,” he said. “Those years are so magical. They’re hard to come back from sometimes. Most commonly, teams struggle coming back. It takes a little while to rebound.

“I’m not saying that’s what they’re doing. This is still the nucleus of a really good team. They’ve got all the elements.”

Actually, Carroll is saying the Eagles have declined, and they are trying to come back.  Outside of Foxborough, MA, it’s what NFL teams do. But perhaps not Seattle.

Since the Seahawks last played in the Super Bowl, six teams have been part of the championship, including New England three times. This season, the Pats have continued their insufferableness with a 9-1 record. Meanwhile the Los Angeles Rams are 6-4, Philadelphia 5-5, Carolina 5-5, Atlanta 3-7 and Denver 3-7.

That doesn’t mean that the Eagles and Rams can’t rally in the final six weeks. But this is the part of the calendar where the Seahawks traditionally line up like the Radio City Music Hall Rockettes for the high-kick finish: Since 2012, Russell Wilson’s rookie season, the Seahawks lead the NFL with 46 regular-season wins from November to January.

Adding some luster to the feat — although management dares not think of it this way — the Seahawks are doing it with their top draft choices tied behind their backs. 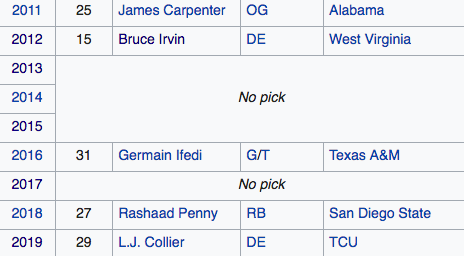 In DE L.J. Collier (2019), RB Rashaad Penny (2018), DE Malik McDowell (2017 second round), the Seahawks have received minimal production from their most valued draft selections. Going back one more year to 2016 first-rounder Germain Ifedi, he’s at the end of his four-year rookie deal as starting right tackle, and the Seahawks have no plans to pick up his fifth-year option.

Tongue-in-cheek, I asked Carroll whether having success despite minimal production from the top of the draft was was due to the brilliance of his coaching.

Carroll loves him some down-draft glory. He hopes to have a little more this week.

The Seahawks announced they were activating for Sunday injured veteran TE Ed Dickson (arthroscopic knee surgery), and surprised many by making roster room for him by waiving sixth-year veteran CB Jamar Taylor, the No. 1 nickel corner.

Taking over the spot is Ugo Amadi, the rookie fourth-round pick from Oregon (132nd overall), who will be making his first career start.

The fifth secondary defender has been used less this year by the Seahawks, who prefer keeping LB Mychal Kendricks on the field. But quitting on Taylor’s experience is hardly a surprise Carroll move.

If a kid can handle it, Carroll will take a chance. Amadi, a special-teams stand-out, is the only other starter so far from the 2019 draft, following WR DK Metcalf, although FS Marquise Blair did have three starts before he was bounced when veteran Quandre Diggs was acquired via trade.

“He’s a real smart player,” Carroll said of Amadi. “He really has his assignments in order, and the techniques that we’re expecting him to play. If he’s the guy playing, we can really count on him to know what’s going on. ”

Carroll wasn’t about to write off the 2019 class.

“Some of them, because of opportunities, have been able to surface earlier,” he said. “I think it’s a really good class that’s going to make a big difference. We’ve got so many kids in it, too. We always count on it. That’s why we approach it the way we do, so that they are available.”

Amadi, of course, was thrilled to be a starter as a rookie.

“It’s going to be a sight to see for me,” he said. “Just blessed with the opportunity, for sure.

“Patience is a virtue. It’s hard for people to be patient. It’s a marathon, not a sprint. For me, that’s what I live by.”

Actually, it’s Carroll’s impatience that’s the driver here. He wants kids in the lineup early and often. Perhaps as the Eagles OC put it, it’s a fresh way to do old things.