Newbie fans probably don’t know the sainted Don James also had a 6-5 season at the University of Washington. Parallels to 1988 are numerous among the 2019 Huskies. 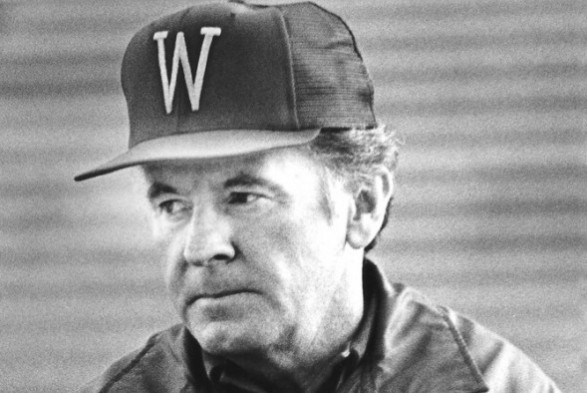 After a 6-5 season in 1988, Don James did something he hadn’t done in his previous 13 years as a head coach at Washington — fired an assistant coach. / David Eskenazi Collection

Fans were clamoring for change. University of Washington players looked beaten down as the losses piled up. The coach tried to remain resolute as his Huskies football program tapered off, dropped five games in an uncharacteristic dip.

That aptly describes what’s taking place right now in Montlake. It also applies to the 1988 season.

Coach Don James’ team had fallen flat, to 6-5. It entered the season ranked 20th. It had a new, hard-throwing quarterback in Cary Conklin, with people more than ready to move on from the graduated Chris Chandler. It underachieved in a big way.

The linebackers were a little slower than usual, with a couple of top recruits at that position, Tim Esary and Brad Durbin, transferring out. The secondary was young and
had painful moments.

While current offensive coordinator Bush Hamdan has become 2019’s object of scorn, UW fans groused about the lack of a running game three decades ago, and
more so the uneven play of the offensive line.

Two days after the 1988 season ended, James fired his first assistant coach in 13 years in Seattle. He let go of offensive line coach Dan Dorazio. He was very open
about it.

A local columnist suggested the legendary coach had made too many incestuous hires, bringing on former players to handle key decision-making roles when experienced coaching minds were available.

It’s sort of what Chris Petersen has done with Hamdan, a former Boise State quarterback when Petersen was there.

In that same vein, James’s 1988 offensive coordinator, Gary Pinkel, was an ex-player of his, a former Kent State tight end learning his way around a headset. But the head coach resisted making a change there.

Good thing. Pinkel was more than capable. He went on to Missouri and became a national coach of the year award recipient when he turned that program into a then-Big 12 power.

In 1988, the Huskies had their consecutive bowl string end at nine, leaving them home for the holidays. They finished the season by losing to Washington State 32-31 in the Apple Cup. All of that galled the purple people to no end.

By thn, James had taken the UW to three Rose Bowls and an Orange Bowl, and a few overzealous fans even suggested that maybe he should go, which is what some
have said about Petersen.

Instead, James made a great line-coach hire in Keith Gilbertson, coaxing him away from Idaho as its head coach. James recruited faster players, having concluded team
speed was a big shortfall. Two years later, James had the Huskies back in the Rose
Bowl. Three years later, he won a national championship.

He did what was needed to be done.

Expect changes in this year’s team after the upcoming Apple Cup and before the bowl game. Hamdan likely won’t survive. Others may be asked to move on, too. It’s part of the business.

It remains to be seen whether QB Jacob Eason sticks around and matures as a collegian rather than jumps early to the NFL. The defense should become the backbone again. A lot of young players are in physical development and haven’t been on display.

These Huskies, if they make the adjustments as James did, likely won’t stay down long.