Thiel: Vikes, QB have scores to settle in Seattle

Since their senior years in college, Russell Wilson and Kirk Cousinis traveled a similar path, but the Vikings QB always has been in Wilson’s shadow. Now come the Monday night lights. 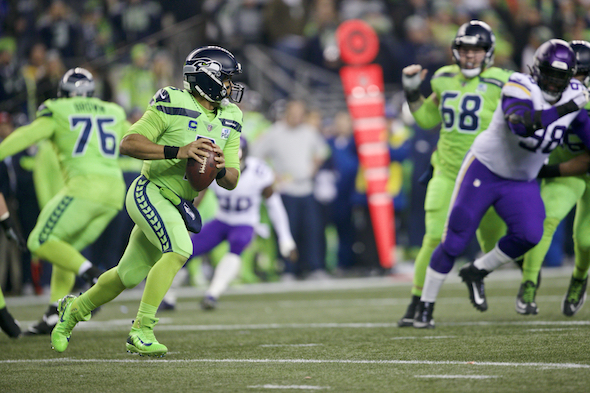 Russell Wilson had a career low 37.9 passer rating a year ago against Minnesota, but the Seahawks won anyway, 21-7. / Drew Sellers, Sportspress Northwest

As closely aligned as are the quarterback careers of Russell Wilson and Kirk Cousins, in college and the NFL, there’s one big discrepancy.

Wilson has eight playoff wins and two Super Bowl appearances. Cousins has none of either.

So if you think the Monday night game at the Clink (5:15 p.m., ESPN) is meaningful for Wilson and the 9-2 Seahawks — a win puts them in first place in the NFC West after the 10-2 49ers lost Sunday 20-17 to the Ravens — Cousins and the 8-3 Vikings are likely amped beyond the measurement capacity of conventional telemetry.

It’s a chance for Cousins to secure his place on the top shelf of NFL quarterbacks. By convenient coincidence, he’s there at the moment.

The playoff-game count is a function of many other factors besides the quarterback, yet the nature of the position makes big-game victories nearly the ultimate benchmark of NFL success for the individuals.

In the 2012 draft, Wilson was taken in the third round, 75th overall, and Cousins in the fourth by Washington at No. 102. They were so close in talent and collegiate success that coach Pete Carroll gave consideration to selecting the Michigan State star over the one-year wonder at Wisconsin, where he transferred from North Carolina State for his senior year.

At the scouting combine that year, the Seahawks interviewed both and were impressed nearly equally.

“We went back-to-back with those guys in our meetings up in the hotel,” Carroll said. “You couldn’t expect to be more impressed by two back-to-back guys coming out and talking about the game, their future, their awareness, their resolve, their commitment and competitiveness.

“Those were the two guys that were really the most impressive in that group that we brought through that year. It was kind of cool.”

Wilson recalled that before the combine, he and Cousins were invited to the Senior Bowl, joining other pending NFL luminaries such as Luke Kuechly, Bobby Wagner, Josh Norman, Mohamed Sanu and Ryan Tannehill.  All worked out together, and Wilson and Cousins became friends.

“It was a tremendous experience just getting to know him,” he said. “We were working every day, pushing each other. Kirk has just a tremendous mind. We get together off-season. Been in a lot of small groups with him.

“I’ve spent a lot of one-on-one time with him, just talking about life and everything. He’s a great football player. I love who he is.”

That development was preceded in December 2011 by a competitive duel in the first Big 10 Conference championship game in Indianapolis. Wilson recalled a regular-season defeat at the hands of Cousins’s Michigan State team that “broke my heart” and saw a chance for payback.

“That was an amazing game,” he said. “I think I got him back on that one.”

Trailing 39-34 in a dramatic back-and-forth contest, Wisconsin faced a fourth-and-six near midfield inside four minutes.

“I remember every good play,” Wilson said. “I remember earlier in that week telling (WR Bobby) Duckworth, ‘Hey, if we get a chance, attack the football.’ He’s such a great catcher. Sure enough, I kind of scrambled left, extended the play. They covered up one and two (receiver options). He was kind of my last resort, deep down the field. Gave him a chance and he went and attacked the football.

Wilson threw back across the field and Duckworth beat double coverage at the Spartans’ 7-yard-line for the first down. The Badgers scored on the next play, converted a two-pointer and won 42-39.

Here’s video from the game, with the Wilson throw at the one-hour, nine-minute mark:

Capable as were Wilson and Cousins in that game (three touchdown passes each) and others, the draft overlooked them in favor of four quarterbacks in the first round:

Additionally, in the second round, Brock Osweiler was taken by Denver at No. 57. After Wilson, Nick Foles was taken in the third round by Philadelphia at 88, ahead of Cousins at No. 102. Never let it be said that when it comes to quarterbacks, the NFL knows more than your bus driver.

Cousins was stuck behind Griffin until his injuries created a chance for Cousins. In 2015, he lost his only playoff start. After 2017,  he left disheveled Washington (26-30-1 in his starts) in free agency for the Vikings’ offer of a three-year, $84 million contract, all guaranteed, with a no-trade clause.

In his first season in Minnesota, the Vikings were 8-7-1 and missed the playoffs, in part due to a 21-7 loss in Seattle when neither he nor Wilson played well, the latter having his career-worst passer rating of 37.9. But as has been the case since the two entered the league, Wilson was with a better team.

Now, that isn’t so clear. Cousins, once criticized for his inconsistency, is partly responsible.

“In the last eight or nine games, he’s played very well,” coach Mike Zimmer said. “I think he’s playing fast, he’s getting the ball in all the right places. I like where he’s at and the things that he’s doing.”

Said Carroll: “I think that the highlight probably is that Kirk Cousins is playing the best he’s ever played. His numbers are great.”

The Vikings have won six of their past seven games, but none of the victories have come against a team with with a current winning record. They are 0-5 against the Carroll/Wilson tandem. Cousins nearly was a Seahawk, but instead has been on an eight-year quest for a signature win. And Minnesota has had two weeks to prepare for the Monday night argument to gain long-denied credibility.

To avenge the Spartans, the draft selection, the Blair Walsh playoff clank, and last year’s brutality, the guys from Lake Wobegon want it more. Vikings 23, Seahawks 20.