Thiel: Even Petersen’s dream job ‘out of whack’

“It’s one of those jobs that is extremely heavy on the balance of your life,” said Chris Petersen. He knew change was pending when he wasn’t excited about the Rose Bowl. 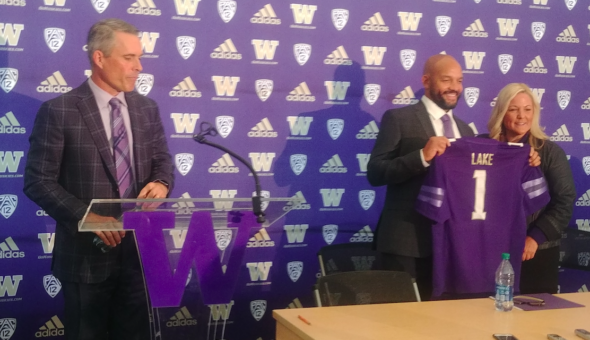 Chris Petersen will wrap up his Huskies career after a bowl game, then hand over the job to Jimmy Lake, with the approval of UW athletics director Jen Cohen. / Art Thiel, Sportspress Northwest

Setting aside the matter of lush compensation, coaching big-time college football is the worst job in major sports. Among all jobs, it’s a step shy of shoveling asphalt daily in a Georgia summer.

In fact, Chris Petersen is setting aside millions of dollars because coaching football is such a brutal experience. Even at his dream job at the University of Washington, where football in a big metropolitan area means, to his delight, “four million people don’t even know football exists.”

With a public candor unusual for him, Petersen explained Tuesday how he came to shock sports locally and nationally with his decision to walk away from his highly successful tenure as Huskies coach, despite all the money, prestige and glamor of operating a big-time program at a high level.

It was eating him alive.

As it likely will his successor, Jimmy Lake.

As it will with more coaches with each passing year.

Cultural and industry pressures are at cross-purposes: Demanding a fundamentally corrupt enterprise make more money to support more programs and buildings, at the same time demanding reform. It has not gone well, nor will it go well, particularly for the guys in charge, especially if they risk choosing to play by the rules.

“It’s one of those jobs that is extremely heavy on the balance of your life,” Petersen said as Lake and his boss, athletics director Jen Cohen, sat nearby at a press conference at Husky Stadium. “There are a million definitions of success, and it’s all for individuals to come up with their own. One of mine is to control the balance of your life.

“You cannot do that in this job. There is no balance. It’s out of whack. It’s crazy.”

The increasing demand to satisfy all the constituencies that lust for college football and men’s basketball is doomed to fail everyone.

“We’re one of (the staffs) that ask coaches to not sleep in the office, which a lot of (other programs) do,” he said. “It’s just non-stop. When you go on vacation, you have a hundred-plus teenagers . . .

“I love those guys, but it is the dumbest crew in America.”

He laughed when said it, as did many onlookers. But wow, was there a truth there that could take weeks to unpack, or what?

Everyone who was a male teenager, or knows someone who is/was, knows exactly what Petersen means, without demeaning anyone’s IQ. Every one of the 25 or so recruits brought in annually, along with 75 or so holdovers, is packing all sorts of fears hidden behind false bravado, and wrapped in some combustible combination of impoverishment, missing fathers, pregnant girlfriends, quibbling siblings, dominating matriarchs and the dread of being canceled on social media.

Then they are asked to take their raging hormones and do two conflicting tasks: Study hard and play football hard, in front of 70,000 often boozy strangers. Failure risks scorn, loss of scholarship and helping damage a multi-million-dollar business supporting 20 other non-revenue sports full of students you’ve begun to know and like.

Every single one of those puzzled players looks to the head coach, the guy they most trusted to bring them to an alien place, for help. Sometimes it’s at 4 a.m. on a Sunday, when the plane bumps them awake in Seattle after bringing the team home from an 8 p.m. kickoff in Tucson.

“There’s always stuff going on that you gotta help them solve,” Petersen said. “It’s just hard to ever get away from that.

“Then there’s recruiting, and parents, and media, and academics. It’s all awesome, great stuff. But after awhile it can load you up. It can become counterproductive, not being as passionate, energized and positive in terms of attacking your day.

“When it gets like that, you need to go do something different.”

So, at 55, Petersen is unloading. He’ll coach through the Huskies bowl game, then remain on campus in some nebulous job titled, “leadership advisor.” He didn’t answer the question of whether he’ll coach again, but the business of college football is going to get more complicated, not less.

“There’s a lot of things that have evolved in college football for the better,” he said. “There are things that are better for the student-athlete, which is awesome. There’s things that are interesting to see how we work through those things coming our way.”

That’s a polite reference to the California state legislature’s new law mandating that colleges not punish athletes who earn money for the commercial use of their names and likenesses. Although it won’t take effect until 2023, recruiting can start to feel the potential fallout soon.

It appears to mark the long-overdue end of amateurism as the NCAA knows it. It could prompt a more formalized acceptance of professionalism, something Petersen and his peers dread, although the specific topic wasn’t brought up Tuesday.

It may have inspired a question to Petersen from Mike Leach, the Washington State coach. The two chatted, per usual, during warm-ups for the Apple Cup game Friday at Husky Stadium, the day before Cohen and Lake said they first learned of Petersen’s planned haymaker.

“He comes up and says, ‘Hey, how much longer are you gonna do this?’” Petersen said. “I thought, ‘Oh my God, this guy’s a mind reader, too.’ I’m like, I hope we’ve got a good plan today because this guy is on us.”

Leach may have been seeking intel on whether his nemesis someday will get out of his head — the 31-13 loss was the Cougars’ seventh loss in a row to UW — or he, too, may be thinking of the same thing that fellow big-name coaches Urban Meyer and Bob Stoops thought when reaching their mid-50s: Get out before the house falls in.

According to Petersen, he began serious consideration of stepping away following the Huskies’ heralded return to the Rose Bowl a year ago. What should have been a milestone moment for a kid who grew up in California, dreaming of being in the game, was something considerably less.

“I had a chance to reflect a couple of months after that, how much I did not appreciate that game like I should have,” he said. “You work all your life to get there, and I didn’t appreciate the week, or the whole game, like I needed to.

“That hit me loud and clear. You start to pay attention to that.”

For as much success as Petersen has had at Washington, he’s never seemed comfortable in the job. In my time pestering him with questions, I reached a conclusion that Petersen’s ideal football experience would be to play all games in the Dempsey indoor training facility, devoid of TV broadcasts, snoopy writers, jock-sniffing boosters, overbearing parents and drunk fans of all kinds. He’d love the chess match with rival coaches and would be happy with a $100,000 salary.

The image came to mind when Petersen quoted from an “Eastern philosopher” that he shyly failed to identify as Confucius:

“We have two lives, and the second begins when we realize we only have one.”

Counting eight playing years in high school and college, plus 34 years in coaching, it has dawned on Petersen that he feels done with football. It may be disappointing to his players, assistants, administrators and many Huskies fans, but his heart is no longer in it.

“Know when to go, when to stay, and when to change,” he said. “It’s the right time for me personally to make a change.”

He can’t fix what’s wrong with college football. That’s up to the rest of us. But his final major act as a coach may help advance the notion that the “out of whack . . . crazy” system is intolerable for people of goodwill and honesty. 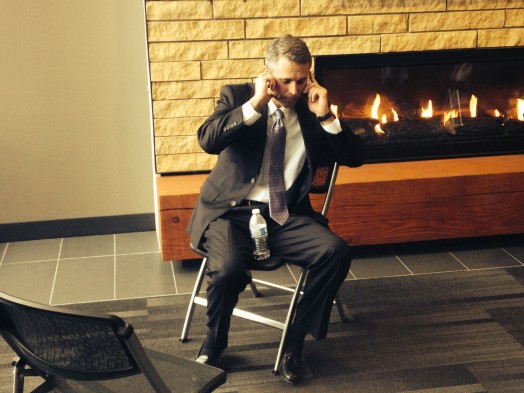 On his first day on the job at Husky Stadium in 2013, Chris Petersen was already working the phones. / Adam Lewis, Sportspress Northwest