Calling coaching a “cauldron of competitiveness,” Pete Carroll understands how Huskies coach Chris Petersen could walk away. Maybe he could walk toward the NFL. 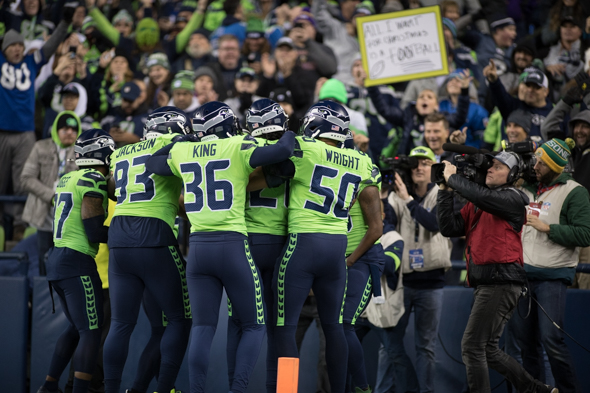 With the Seahawks, there always seems to be a party nearby. / Drew McKenzie, Sportspress Northwest

Pete Carroll was asked a question Wednesday about whether he agreed with a national commenter who said the Seahawks seem to have more fun than any team in the NFL. Obviously, it’s easy to have fun at 10-2, but the Seahawks coach has always understood a basic teaching principle that there’s a direct correlation between enthusiasm and learning.

“I like to go back to a thought: You don’t work football, you don’t drudgery football, you play football,” he said. “I don’t ever want to lose connection with that. I want to figure out how to lighten the atmosphere while we work really hard. If we’re not having fun, I feel like I’m screwing up.

“We practice with great energy and juice while hauling butt around here, and you can have a good time doing that.”

The remark was was particularly relevant in Seattle, where the city’s other pro team, the University of Washington Huskies, was rocked this week with the news that coach Chris Petersen was walking away from the program and more than $15 million in compensation because he was no longer enjoying the job.

The contrast doesn’t mean the Huskies under Petersen ran a dour operation, nor does it mean that Carroll believes he has a better approach. What it does mean is that while the game is similar, the business and operations of the enterprises are vastly different, as Carroll pointed out when asked about Petersen’s departure.

Calling him “one if the best coaches I ever saw,” Carroll recalled that when he was at USC, he reviewed film of Petersen’s Boise State teams first whenever he drew up a game plan against a mutual foe, because he admired Petersen’s expertise. He also supported Petersen’s decision to walk away.

“I couldn’t applaud him more,” he said. “It’s a hard choice to make. This (coaching) is something we’re so committed to, it calls on so much of us. It’s all-consuming.”

Carroll, one of only three football coaches who have won a Super Bowl and a college football national championship —  he did it twice during his nine years at USC — is well-qualified to explain why the school gig, which he described as a “cauldron of competitveness,” is more onerous.

“The college game is really different in terms of the constant recruiting pressure,” he said. “It’s really the strain of it. It just doesn’t go away. You’re (always) on to the next year, an ongoing process.

“The other part of it is the demands of being on top . . . Where we were (USC), if you lose a one game, it’s like eight; you almost went through a losing streak. It’s a little different in this league in that regard. It’s hard to win every game in this league. One team has done it ever. The expectations are different.”

The Huskies lost five games this season, and three were upsets (Cal, Stanford and Colorado). Petersen said Monday he recognized his failure to appreciate as a peak experience UW’s first appearance in the Rose Bowl since 2000 was a sign that something was amiss with him.

It’s hard to say with certainty whether his flagging passion impacted the season. But his decision to walk away on the first day following the end of the regular season suggested he wanted to avoid any damage bleeding into 2020.

The pressure for instant, sustainable success always seems higher in college, perhaps because the programs depend a great deal on wealthy alumni who believe their donations give them influence, and the personal right to hold coaches accountable.

Responding to a question about the many constituencies that college coaches must serve, Carroll seemed to suggest that the nuisance is burdensome. But Carroll is a garrulous personality and Petersen is taciturn, which meant Carroll was better equipped to roll with the obligations, while Petersen generally was repelled by it. The same prevailed in media relations; Carroll sees some sport in the give-and-take, while Petersen often treated his press conferences like a cat heading to a bucket of water.

Carroll sounded as if he prefers the control the NFL exerts over outsiders.

“It’s hard to imagine what it was like in LA,” he said, “but it was just a constant revolving door of people coming through the office and coming through the facility. Here (at the team headquarters in Renton), we’re pretty much sequestered. There’s a lot more quiet time than I used to get where I was down there.

“There is the constant of the boosters and all that kind of stuff that are more connected than (Seattle) fans. They feel more connected, and they are more connected. They’re closer to you.  As well as the students. You’re working in the middle of 16,000 people. There are so many more opportunities for activity.

“Not too many Trojan Club meetings here either. You do minimize the things that can pull you away from the football.”

Petersen over his six seasons made numerous admiring references to NFL operations, citing the uniform calendar, equality of resources, orderliness of the draft as a roster re-supplier and absence of NCAA governance. For a guy who insists on control of his environment, the NFL is a better fit.

There’s no indication that Petersen’s undefined future has in it NFL aspirations. Then again, there was no indication Petersen was going to trap-door the college football world.

Perhaps he and Carroll will have a conversation, in which Carroll can confide that not only is fun legal in all states where the NFL operates, it is possible and advisable for coaching.

Then, after the Seahawks win the Super Bowl and Brian Schottenheimer takes a head-coaching job, Carroll will have an opening at offensive coordinator.