Thiel: Seahawks look as bad as Rams 2 weeks ago

If you thought the 28-12 whipping by the Rams was grim for the Seahawks, imagine what Rams fans thought about LA’s 45-6 loss to the Ravens. It’s the NFL — whipsaws happen. 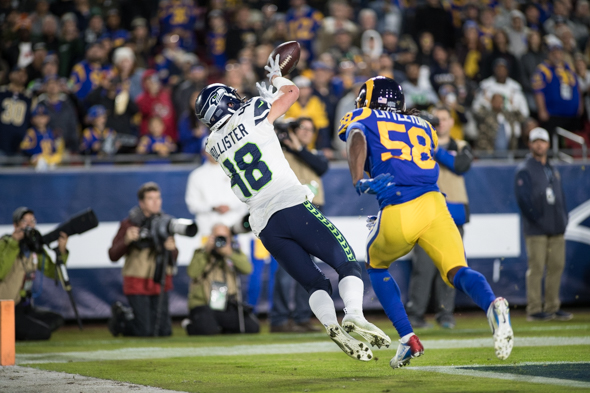 For a good team, it was hard to imagine playing worse. Under-energized. Over-matched. Out-coached. Borderline helpless. They embarrassed themselves in a big national game.

But enough about the Los Angeles Rams. How about those Seahawks Sunday night on national TV at the Coliseum?

They were whipped soundly by the Rams, 28-12 (box). Two weeks earlier, the Rams were similarly pantsed, 45-6, by the Baltimore Ravens on Monday Night Football.

Sunday, it was hard to discern any lingering damage to the 8-5 Rams and their playoff chances from the humiliation, as they scored touchdowns on three of their first four possessions, and sacked Seattle QB Russell Wilson five times and hit him 11 more.

Such whipsaws are how the parity-encrusted NFL works.

Good teams can look bad on any given week. Just as the Rams failed to score an offensive touchdown against the Ravens, so did the Seahawks against the Rams. Sunday, Rams QB Jared Goff looked a whole lot better than two weeks ago, when many in the NFL world declared that his long-term contract was the worst deal since JaMarcus Russell’s.

The game meant far more to the Rams than the Seahawks, and both teams played like it. Having lost to the Seahawks in Seattle and having slipped to the cliff’s edge of the postseason at 6-5 following the Baltimore pounding, the Rams wanted this game in the sincerest way possible.

On the other hand, the Seahawks were gliding along on a five-game win streak, including a 37-30 triumph Monday night at home over a playoff-worthy Vikings team. Seattle was 10-2 and a bit of a darkhorse dandy among the chattering classes regarding the postseason. The players were feeling like no matter the early peril in a given game, they would find a way.

No, actually. They’re not that good. Even if was only the first road loss of the season.

Much has been made of the closeness of the Seahawks wins, suggesting that they may be as lucky as they are clever. There is something to that theory. Winning is insidious in how  it breeds comfort. To put it another way:

“We gotta come out with better energy,” said Quandre Diggs, the newcomer free safety who is as wise with words as he with deeds, which Sunday included two interceptions, one returned 55 yards for the Seahawks’ only TD.

It was not a matter of overlooking the Rams, an absurd notion. It’s a matter of underestimating how hard the NFL is from week to week, particularly when facing a team that already has had its public shaming.

Coach Pete Carroll hinted as much.

“They did a nice job on us early,” he said. “We weren’t surprised by it, but didn’t handle it as well as we’d like. It was too much of a surge in the first half that we weren’t able to overcome. Difficult night.”

The defense, missing starters DE Ziggy Ansah (neck stinger) and LB Mychal Kendricks (hamstring), seemed bewildered by the Rams’ misdirections, jet sweeps, up-tempo pace and formation trickerations that produced multitudes of open receivers. On their first possession, the Rams moved 75 yards in eight plays for a touchdown, followed by 12 plays and 83 yards for another score and 14-3 lead.

The Seahawks were virtually helpless to locate and track WR Robert Woods, who had seven receptions for 98 yards and two rushes for 29 yards. When the Rams took out another 10-play drive for a score in the final minute of the first half for a 21-3 lead, the Seahawks appeared as helpless as the Rams did when the Ravens were up 28-6 at the half two weeks ago.

“We didn’t make our (defensive) calls quickly enough,” Carroll said of the bafflement. “The first two drives were really well done by them.

“We just needed to keep moving and we just didn’t convert (third downs).”

The line was getting hammered by DT Aaron Donald and friends. Penetration blew up the ground game and had Wilson desperate to save his backside. It was the first game without a Seahawks offensive touchdown since 2017, when the Seattle lost the opener 17-9 to Green Bay, and only the sixth time in 125 starts that Wilson was TD-free.

Further complicating matters was the injury loss of RB Rashaad Penny after a 16-yard gain on a swing pass on his first and only play of the game.

Carroll described Penny’s sprained ACL as “significant.” It was a blow to a game plan that had begun to rely on Penny’s versatility. Third-string back C.J. Prosise was active and had one carry, but he’s had little practice as a between-the-tackles rusher, even fumbling an exchange with Wilson.

“We gotta quit getting hit in the backfield, for sure,” Carroll said. “Russ needs to get the ball out — whether to throw away or not — to help us a little. Their rush is as formidable as we face.”

Perpetually behind and needing to throw, Wilson took a considerable pounding, but would not admit that the walloping accounted for more than a scratch.

“I’m good,” he said, the same answer he would provide if he had five arrows protruding from his back. He finished 22 of 36 for 245 yards and a 69.8 passer rating that included a last-minute, end-zone interception of a Hail Mary — the Seahawks’ only turnover.

The pressure reduced the time Wilson had to unleash downfield. The Seahawks had only two completions longer than 20 yards and no rushes beyond 17 yards.  The absence of explosive plays was noted by WR Tyler Lockett, who had 43 yards on four catches.

Despite all the breakdowns, the Seahawks have some margin for error in the playoff pursuit. The loss dropped them to 10-3 and fifth spot among the NFC playoff seedings, and a game back of division-leading San Francisco, which had a spectacular 48-46 win over New Orleans Sunday.

But the Saints loss makes it possible for the Seahawks to control their fate. A win at cratering Carolina Sunday, followed by wins at home against Arizona and San Francisco to conclude the regular season would give the Seahawks the NFC’s top seed.

‘The interesting thing is, (the loss) doesn’t change anything for us,” Carroll said. “We had to win this game, and now we have to win the next one. We have to keep on rolling if we want to do anything with this season.”

If you saw nothing from the Seahawks Sunday that resembled what a top-seeded team looks like, wait a week. Or two. Or three.

It’s remarkable the therapeutic value in a dope-slap. 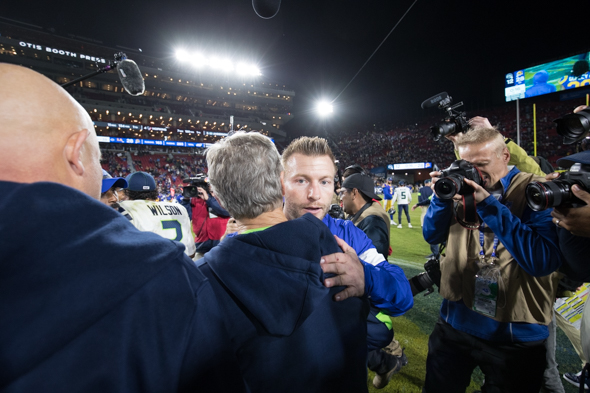