Rams pressured Russell Wilson further into a downward cycle with 5 sacks. Pete Carroll thinks he’s holding the ball too long. Related: RB Rashaad Penny is out for the season. 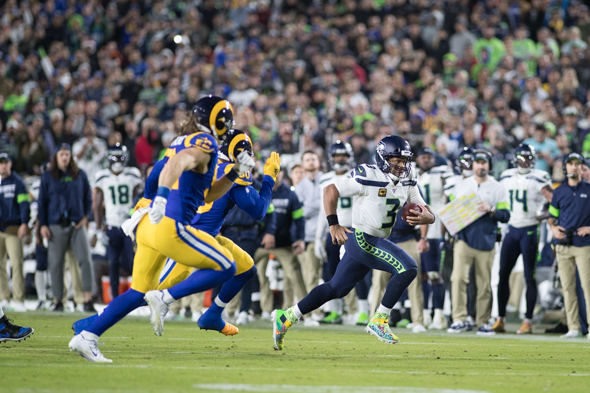 On too few occasions Sunday did Russell Wilson scramble for chunk yardage against the Rams defense. / Drew McKenzie, Sportspress Northwest

Since the outcome Sunday was the Rams’ fourth win in the past five games against the Seahawks, and eighth in the past 12 meetings, there probably shouldn’t be much shock in Seattle’s 28-12 loss at the Coliseum. But 10 wins in the season’s first 12 games created an expectation that somehow things would have gone better.

In fact, the Rams own the Seahawks.

The pivotal reason the Rams lost in Seattle 30-29 Oct. 3 was because reliable kicker Greg Zuerlein missed a 44-yard field goal with 11 seconds left that would have won the game. Otherwise, the series would have been a sweep.

More important, the Rams know they can do one thing better than any other team against Seattle: Largely due to all-planet DT Aaron Donald, they can pressure QB Russell Wilson into indecision, errors and inefficiency.

Since the game in Seattle, the LA defense acquired an additional asset: Premier CB Jalen Ramsey, who bullied his way out of Jacksonville and into a midseason trade to LA. Sunday, Ramsey traveled with Seahawks rookie WR DK Metcalf, whom the Rams obviously deemed the most dangerous weapon.

Metcalf still caught all six balls thrown his way, for 78 yards. But he didn’t require double-teaming, and his biggest play, a 35-yard completion, came late, out of desperation with the game in hand.

Having a shutdown corner meant the Rams largely could use four rushers against Wilson  and blitz only occasionally, forcing him to hang onto the ball a beat or two longer. The results were game-changing: Wilson was hit 11 times, sacked five times, and had 28 yards in five rushes, only one of which was noteworthy, for 17 yards.

“We decided to rush together today, to collapse the pocket and don’t let him get out of there,” Brockers said. “I think that’s the best way of rushing him. I’ve seen him wreck games when we try to rush our own way and he gets out.”

The result Sunday was that, despite the Seattle defense’s second-half recovery with two interceptions and a blocked field goal, the offense could not take advantage. The tally of the final five possessions:

One drive was spoiled with a minus-11 sack of Wilson, another with a minus-12 sack. But the futility wasn’t all on him. One drive clanked with a 15-yard unsportsmanlike conduct penalty on Metcalf, who was suckered into a shoving match with the trash-talking Ramsey, and another by back-to-back O-line penalties on LG Mike Iupati (holding) and RT Germain Ifedi (false start).

Since the Seahawks entered Sunday having surrendered 18 sacks in the previous four games, the five by the Rams seems to have set off alarms at VMAC. Carroll put part of the blame on Wilson’s tendency to wait too long before releasing.

“There’s enough plays to say there’s an issue,” Carroll said on his weekly ESPN 710 radio show Monday. “It’s never one thing, because that would be easy to fix. There were times when Russ held the ball, waiting for another opportunity. He’s had so many marvelous things happen . . . but this group is coming at you. There was some really good pass protection when we got sacked, because he held the ball. Russ also makes (scramble) plays that were not available to to us. He did not get out and get scrambling as much as usual.

“We’re concerned about it. We’re running the ball efficiently. We need to keep the pass rush at bay. We have to do that with (our play-action calls), running the ball and slowing (the rush) down.”

Carroll calling out Wilson is a rarity, but the four-game trend in his play — passer ratings below 100 in all, with none prior to that — is downward.

The schedule offers a modest assist for implementing late-season amendments, with games at Carolina (5-8-1) Sunday and home against Arizona (3-9-1) the next week. Should the Seahawks win both, the regular-season finale against 11-2 San Francisco could be for all the goodies in the NFC playoff seedings.

But now the 49ers have the movie of how to stifle the Seahawks, with the Jalen Ramsey role to be played by noted thespian Richard Sherman. The Seahawks have time to change it from a horror film.

Penny out for the season

RB Rashaad Penny’s right ACL is torn and he will be lost for the rest of the Seahawks season, according to an NFL.com report.

#Seahawks RB Rashaad Penny tore his ACL in last night’s loss to the #Rams and is out for the season, source said. The MRI confirmed the news for the former first-round pick, who also has additional damage to his knee. He’s out until training camp. Tough injury.

Carroll said at his Monday presser that “we are going to miss him the rest of the season,” confirming the report. The first-round draft choice in the 2018 draft went down on his first play, a 16-yard swing-pass reception after he was tackled by former University of Washington star Taylor Rapp. Penny pounded the ground in pain, then limped into the injury tent before heading into the locker room.

The Seahawks will advance little-used C.J. Prosise into the backup role behind Chris Carson, with rookie Travis Homer in reserve.