“They’ve had better games,” said DC Ken Norton Jr. of the Seahawks linebackers in the Rams loss. Part of it was a rookie starting his first game, part of it was plain old confusion. 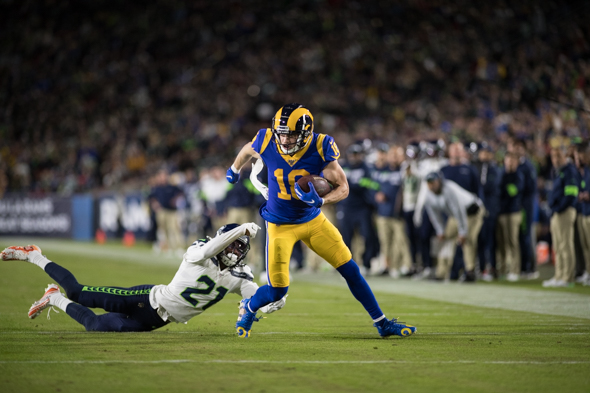 After several questions about the perplexing failures in Sunday’s 28-12 loss to the Rams, coach Pete Carroll offered a hint to media members at Wednesday’s presser on the direction he’d like rest of the conversation to take:

To Carolina. To a road game Sunday morning against a Panthers team that fired its long-time coach last week, is without injured star QB Cam Newton is 5-8 this season and 1-6 in the regular seasons against the Seahawks during Carroll’s tenure.

Some might characterize the match-up as a soft landing after the hard fall in the Coliseum.

Of course, that assumes the Seahawks will win, which, despite being cast as a six-point favorite, is harder to assume after what was seen in Los Angeles. Which gets us looking back to Sunday instead of ahead.

Sorry, Pete. A long shadow has been cast.

Carroll and crew went to some lengths to hail the Rams rather than castigate the Seahawks.

“Other than their turnovers, they played near-perfect, and we needed to be at that level,” said Carroll. “We weren’t. You’ve got to give them credit.”

Said defensive coordinator Ken Norton Jr.: “You’ve got to give the Rams a lot of credit. They played really, really well. They are a good team and we didn’t match their execution.”

Apart from the giving of more credit than a Russian bank, Seahawks coaches have to confront the unexpected development of poor play from a veteran linebackers unit that had been one of the team’s strengths.

The most obvious problem was rookie Cody Barton making his first career start in place of injured Mychal Kendricks (hamstring). That left Bobby Wagner and K.J. Wright to worry about the new kid as well as the Rams’ precision array of play-action, jet sweeps and assorted misdirection, delivered up-tempo.

“There were a couple things that happened that got us off,” Carroll said, declining to elaborate. “There’s enough newness that kind of contributed to it. (Barton) had to make his alignments, and it happened really fast.

“Then, worrying about the new guys. It wasn’t as good as we needed to be. We just have to eat it. There’s nothing I can tell you, other than we didn’t do it well enough.”

“They’ve had better games,” he said. “Cody being a rookie, you expect some inconsistency. He played some plays really well, and the plays he didn’t play really well were plays that may have hurt us a little bit.

“It’s kind of tough putting him in there in that type of situation but, he’s developing really well.”

The problem is that December is a lousy time for development. It’s also a lousy time to be unable to line up properly pre-snap. Especially in the Rams’ first two possessions that ended up being touchdown drives, the Seahawks frequently weren’t assignment-correct.

“Not being lined up, that’s not us,” said CB Shaquill Griffin. “We can’t allow that to happen. That was the toughest part. We usually don’t get caught off-guard. We knew they were up-tempo, but there were times when we weren’t ready.”

That problem was not about Barton, who also had minor knee and ankle injuries that caused him to miss some plays.

“It was miscommunication, not a rookie,” Griffin said. “We have more than enough vets on the field to make that not happen. We’re unstoppable when we’re set.”

Answering a question after the game about the lapses, team captain Wagner took responsibility: “That’s on me,” he said.

There were also laments about the defensive calls arriving belatedly from Norton.

“They were effective in their tempo,” he said. “It comes down to getting lined up and communicating. I think everybody had a little piece of that.”

For his part, Barton said he thought he did all right for a first start.

“The biggest thing was getting my feet wet, which was good,” said Barton, a second-round pick after an all-Pac-12 season at Utah. “Regardless of where the call is at, if you make a call, even if it’s the wrong way, we’re on the same page. If we’re all wrong, we’re alright.

“You don’t know what to expect, but you trust that you’re there for a reason. As the game went on I got more into the flow of how things work.”

If Kendricks can’t go Sunday, Barton will be in the flow again, although at the Coliseum, he and the rest of the Seahawks defense, which had no sacks and only four quarterback hits, looked swept away. The Rams had 455 yards of offense and a whopping 6.8 yards per play.

Given that Carolina has lost five in a row by an average margin of 13 points and has an offense ranked 21st (341 ypg), a Seahawks win won’t be much of a gauge on the recovery of Seattle’s defense from the Rams debacle.

But if you see them all zipped, tucked and fitted in their proper spots, looking at the Panthers offense instead of each other in bewilderment, consider it a good start, even if it is mid-December.