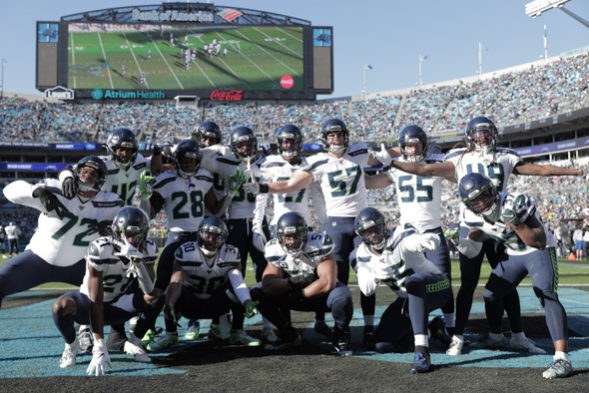 The Seahawks, after an apparent touchdown, reversed upon review, nevertheless had plenty to celebrate with Sunday’s win and other game outcomes. / Daniel Mogg, West2East

“I told the coaches, the ball spins good for me in North Carolina,” he said, referring not only to his three starring years at North Carolina State, but to the Seahawks’ run of four wins in five games in Charlotte against the Panthers.

Now that the streak is five of six after a 30-24 win Sunday (box), it appears the coaches are not entirely dim. They took Wilson’s hint and helped turn it into a franchise-record seventh road triumph that clinched a playoff berth at 11-3, and sent them momentarily to the No. 1 spot in the NFC playoff standings.

After the Seahawks won, the Atlanta Falcons (5-9) stunned the homestanding San Francisco 49ers (11-3) 29-22 — all three Niners losses have come on the final scrimmage play — to give Seattle the lead in the NFC West, which also saw the Rams, who throttled Seattle a week ago, blasted by 44-21 by the Dallas Cowboys.

Another potential 11-3 team in the NFC, the New Orleans Saints, hosts the Indianapolis Colts (6-7) Monday night. If the Saints win, they would hold the top seed based on their September triumph over the Seahawks. The top two positions qualify for a first-round bye, a most valuable asset in the NFL playoffs. (Current playoff seedings and scenarios here).

As the scores rolled in, the party on the Seahawks’ five-hour flight home from Charlotte would have been the airborne holiday event of the season.

As to the Seahawks’ contribution to the Sunday of tumult, the primary takeaway was not how their messiness concluded. The key was how the Seahawks started: Touchdowns on the first three possessions in a pass-first plan that exploited Wilson’s comfort with Carolina’s apparently rare air.

The Seahawks had not done as much as back-to-back scores to open any game this season; Sunday they went 75, 80 and 75 yards for the three TDs.

After falling down 14-3 against the Rams in Los Angeles in a 28-12 defeat the previous Sunday, rendering impossible a comeback against what that day was a premier defense, the Seahawks put a priority on stomping early and firmly on the collective throat of the disheveled Panthers (5-9).

They did not have the services of QB Cam Newton, TE Greg Olsen or coach Ron Rivera, the latter fired two weeks earlier. Best to exploit early the lame and the halt.

In the first half, Wilson was 11 of 14 for 192 yards and a perfect passer rating of 158.3, which included touchdown passes of 19 yards each to DK Metcalf and Tyler Lockett. Wilson finished with a rating of 137.3, the first time in five weeks he topped 100.

A significant party to that success was Lockett, who had eight catches and 120 yards, demonstrating he was finally free of the effects of a leg injured against the 49ers, and a bad case of the flu.

“He and Tyler together are phenomenal,” Carroll said. “It’s been awhile. Tyler’s been working his way back; you could see it today. It’s great to have him back.

‘Russell loves being here. He has played really well here and we’ve won a lot of games here, fortunately. He played terrific today.”

Per @EliasSports, the Seahawks are the 2nd team in NFL history to win 10 one-score games in a single season, joining the 1978 Oilers.

Abetting the tandem was RB Chris Carson, who had a career-best 133 yards on 24 carries and two touchdowns. The second one came with 7:18 left in the game on a fourth-and-inches play at the Carolina six-yard line. Behind RT Germain Ifedi and TE George Fant, Carson powered through the first wave of tacklers, then dragged LB Shaq Thompson into the end zone.

The score put the Seahawks up 30-10, which should have all but adjourned the proceedings. But no. Injuries left the Seattle defense in such shambles that it let the Panthers, behind second-year QB backup Kyle Allen, ramble 75 and 84 yards for 14 unanswered points.

The latter TD came with 3:18 left. With key first down plays from Carson and Lockett, they ran out the clock to save the defense from further embarrassment.

Post-game, Carroll and Wagner sounded positive about the chances Wagner might play Sunday in the home game against Arizona, but Carroll was more skeptical about Diggs.

“He looks a little more serious,” Carroll That would be a big loss if he can’t get back. He’s been playing great football.”

Carroll believed that Clowney (illness) and Ansah (neck) had good chances to return, as did Kendricks (hamstring); Griffin less so.

But for the moment, the Seahawks sounded robust.

“To be 7-1 on the road is a huge thing,” Wilson said. “Now, we  get back home for two tough division games. Exciting times. All the things we want to do are right in front of us. We can control our own destiny.”

Wilson was particularly pleased about producing double-digit wins in two playoff seasons after many had written off the Seahawks’ post-Legion of Boom future.

It’s been an awesome joy ride, really the past two years of what we have been able to re-establish,” he said. “We had so many great players, and a lot of people thought we were going to be down and out.

“Bobby and I really talked about that wasn’t going to happen.”

Carroll said he thought there were six defensive players on the field in the fourth quarter who were not regular starters. Those appear to have been FS Lano Hill, LBs Cody Barton (10 tackles in his second career start) and Ben Burr-Kirven, DEs Rasheem Green and Quinton Jefferson and CB Akeem King. FS Marquise Blair and CB Ugo Amadi also had cameos.

But before the injuries, Wagner had his first interception of the season and LB K.J. Wright had two, so the defense was not without reward.

“That was dope,” said Wagner, beaming. “Big day for linebackers. First time we’ve had picks (in the same game). ”

Regarding all the subs, Carroll, as always, found a positive.

“It’s a statement for us down the stretch,” he said. “We need everybody to play. It makes us stronger.

“I’m really proud of getting to 11 wins, with a chance to get more. This team deserves to be sitting where they’re sitting.”

Or flying. With or without a plane.