Thiel: Know how good you have it, Hawks fans?

The Cardinal franchise’s relentless mediocrity highlights what a great decade the Seahawks have had. Carroll’s prep for NFL success began with his first NFL failure. 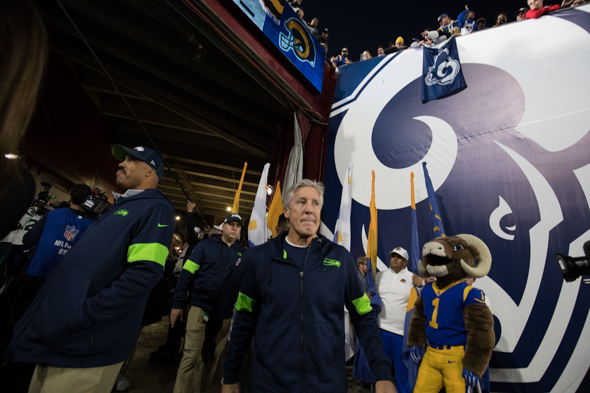 Coach Pete Carroll awaits on Dec. 8 what might have been his final appearance in the Los Angeles Coliseum after the Rams move into a new stadium in 2020. / Drew McKenzie, Sportspress Northwest

The arrival Sunday at the Clink of the Arizona Cardinals, the only NFC West team out of contention for a playoff spot, serves as a reminder of how fortunate Seahawks fans should feel about eight post-season appearances in the 10 years directed by coach Pete Carroll and general manager John Schneider.

Kliff Kingsbury is the the Cardinals’ fourth head coach in the same period, in which the franchise has appeared in three playoff games, winning once.

Kingsbury, 40, is a rookie to NFL coaching. Asked on a teleconference Wednesday how his first season was going, he said, “Every day is a new opportunity to learn something, and try to be open-minded. Not make the same mistake twice as I go through this thing.”

When they were 3-3-1, no other Cardinals coach since 1966 had a better record in his rookie season. Now they are 4-9-1, having ended a six-game losing streak Sunday with 38-24 win over Cleveland. First-time NFL head coaches have a lot to learn.

So I asked Pete Carroll Wednesday what he knew least about the job when in 1994 he was named head coach of the New York Jets. He had a good story.

“The first (media) meeting that I ever had, the owner, Leon Hess, sat right in the front of the room,” he said. “I didn’t realize it. I didn’t play to the audience (him).  I was saying we were going to do this, and we’re going to do all these things (and that) we didn’t have any rules. I was trying to be all wide open. He was sitting there, and  I was going to go through it no matter what, thinking I was doing the right thing.

“That was a total mistake. He was thinking, ‘What do you mean, you don’t have any rules?’ He never talked to me after that. I didn’t talk to him. The next time I talked to him, he said, ‘Pete, a man in your position would resign, but I know you’re not going to do that. So, you’re fired.’

“That was the second time I talked to him.”

“I just scared him to death, I think,” he said. “Great memories. Thanks for bringing that up.”

He was smirking. The fact that Carroll would share the story tells much about how secure he is about his position with the club and within the NFL.

An 11-3 record with a youthful roster enhances his comfort, but Carroll’s ease really didn’t come from this season’s results.

Carroll hired on with owner Paul Allen 10 years ago in part because, beyond financial considerations, he insisted on having control of the football operations free of ownership meddling that victimized franchises in Washington, Dallas, Cleveland, both New York teams and elsewhere. In exchange, Carroll had to choose a GM from a list of four candidates vetted via then-CEO Tod Leiweke. That assured he would not hire a crony.

The Carroll/Schneider collaboration, following the successful tenure of another Allen hire, Mike Holmgren, seems to have worked.  Since the NFL realigned in 2002, the Seahawks’ 13 playoff berths are second only to New England’s 16, and have reached 10 wins for the seventh time in eight seasons.

Beyond the numbers, it has allowed the franchise to operate largely free of tensions, stresses and jealousies that tend to compromise other teams. It’s not that they don’t make mistakes or have controversies. Those are inevitable. But the front office does not seem to be riven with mistrust among its principals that generate distractions and mission decay.

Even after the death 16 months ago of Allen, his sister and successor, Jody Allen, has so far maintained course.

For younger players, the smooth functionality is little noted. They are busy living in the moment. For a 12-year vet like LT Duane Brown, now with his second team after 9½ seasons with the Houston Texans, it is kind of a big deal.

“It creates a tough environment.”

Brown said before his trade, he heard from other players around the league Seattle had a good thing going in terms of a helpful, positive atmosphere.

“From what I saw under Paul Allen, there was a huge amount of trust to assemble the team (Carroll and Schneider) wanted,” he said. “The tradition here is nothing but winning, and competing at a high level every year.

“I’m not around them much, but it seems like John and Pete have a very good working relationship. There’s a mutual respect there. You see them communicating often. Their comfort levels in their jobs trickles through the organization.”

NFL front offices are loaded with Type A strivers who need success to elevate and often fear accountability for error. Missed playcalls, missed draft choices and missed field goals make for 32 national hothouses. The trick is not just to survive, but to flourish by keeping disagreements from becoming conflicts.

“Before coming here, from the outside looking in, I always had a lot of respect for his team, the way they present themselves as a team and in the locker room,” Brown said. “How coach Carroll is with players is not something you see every day.

“I asked guys how it was, and they said it was exactly as it looked.”

Carroll learned to manage up before he managed across and down. The subsequent orderly operation helps create a confident outfit that can win 10 games by margins of eight points or less in a single season, a feat done just once before in NFL history.

For a decade, the Seahawks have had a rare thing going. Doesn’t mean they’ll win the next two games in this harrowing season, but no one should be surprised if they won the next two after that.