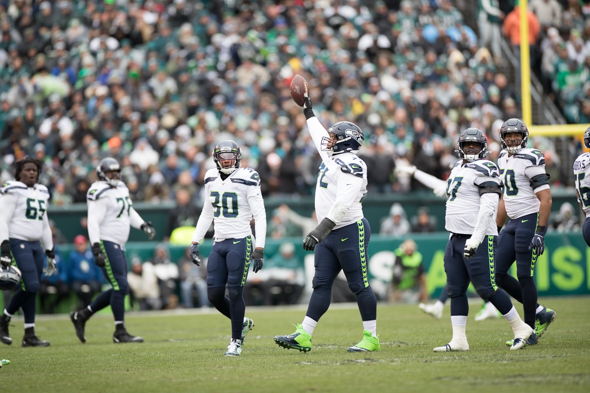 DT Al Woods celebrates with one of the Seahawks’ five turnovers off the Eagles Nov. 24. / Drew McKenzie, Sportspress Northwest

Among the Seahawks, ’tis the season to be busted.

This time, DT Al Woods was suspended Friday for four games for violating the NFL’s policy on using performance-enhancing drugs. The ruling follows by five days the indefinite suspension of WR Josh Gordon for PEDs as well as substances of abuse.

“There’s really not much we can say about it,” coach Pete Carroll said after practice Friday. “He’s been a great kid in the program. Loved what he’s done.”

At 32, he’s not exactly a kid, and should have known better. It is a blow to the Seahawks’ D-line depth ahead of Sunday’s home game against Arizona (1:25 p.m., FOX), but even more against San Francisco Dec. 29 and subsequently into the playoffs.

The 6-4, 336-pound run stuffer on early downs has played in every game, starting five early in the season while DT Jarran Reed served a suspension, with a sack, a recovered fumble and 32 tackles.

Per policy with the players union, the league doesn’t disclose the drugs or the date of testing to the club or the public.

Replacing him on the roster is Bryan Mone, 24, a 6-3, 345-pound undrafted free agent out of Michigan who played as a sub in the first three games, was cut and brought back to the practice squad.

“He’s a guy who’s been right at the edge of it the whole season,” Carroll said. “Real big, strong guy. We love the way he plays and competes. He’ll just step right in.

“He’s got a great motor for chasing the ball for such a big man. We’re always showing his highlights. I think I had three highlights on yesterday from just his effort in practice.”

In other personnel news, Carroll reported that LB Bobby Wagner, who had a sprained ankle Sunday in Carolina,”looked fine” and that DE Ziggy Ansah (neck stinger) “had his best week all season,” and will be a full go.

“This was the best week that he put together,” he said. “He’s the heaviest and strongest he’s been since he’s been with us. Everything looks really positive. I’m really fired up for him to have a chance to get back in there and do some good stuff.”

But the positive news on defense was tempered by the likely absences of DE Jadeveon Clowney (core muscle) and FS Quandre Diggs (ankle), both listed on the injury report as doubtful.

Clowney is over the flu that helped keep him off the trip to Carolina, but the week off hasn’t helped his abdominal injury that happened in the 49ers game. He hasn’t been the same since and Carroll admitted to concern.

“Yeah, some,” he said. ” Over time, it’s just been a problem. He just can’t quite get going yet during the week. But, if he can’t make it back, he can’t make it back. We’ve just got to keep waiting on it and see if we can take care of him, and maybe the right combination of rest.”

CB Shaquill Griffin and LB Mychal Kendricks have hamstring soreness and were listed as questionable, along with LT Duane Brown (knee, biceps). All are game-time decisions. TE Luke Willson (hamstring) is expected to play for the first time since the 49ers game.