As much buzz as there is for the return of Marshawn Lynch, Seahawks need Jadeveon Clowney to return to the form of the first 49ers game. 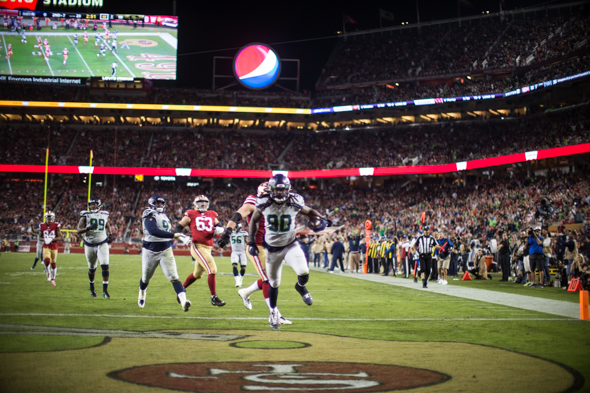 DE Jadeveon Clowney crosses the goal line with the Seahawks’ only points in the first half of their 27-24 overtime win against the 49ers at Santa Clara Nov. 11. / Drew McKenzie, Sportspress Northwest

Even RB Robert Turbin, a backup who made four starts in 81 career NFL games over eight seasons, had to chuckle over the fuss being made about him. Oh, and the other old newbie too.

“Marshawn and I laughed about it earlier today,” he said. “It’s like, ‘Man, we picked a heck of a week to come back, didn’t we?’

“With the NFC West championship on the line for the team, I couldn’t think of a better opportunity.”

The idea of hiring off the figurative couch two former Seahawks, neither of whom has played this year, to rescue a suddenly broken Seattle team at its seasonal apex moment against the arch-rival, is one of the more absurd storylines in recent NFL history.

But whether Marshawn Lynch Sunday plays against San Francisco like a house afire or Mrs. Doubtfire may be secondary to another personnel mystery: Whether DE Jadeveon Clowney is more like Jadeveon Clowney than Lynch is Beast Mode.

Nov. 11 in Santa Clara on a wild Monday night of football, Clowney had 10 quarterback pressures, five QB hits, a sack, five tackles and another for a loss, plus a scoop-and-score touchdown from a fumble he forced that broke the Seahawks’ first-half torpor. Named NFC defensive player of the week, Clowney was the single biggest reason the Seahawks won 27-24 in overtime to help create the stakes Sunday (5:20 p.m., NBC): The division title and a chance to get a first-round bye in the playoffs.

But Clowney has hardly been heard from since.

Somewhere during that game, he doesn’t exactly know when or how, Clowney injured a  core muscle at the top of his right leg. He’s been inactive for three of the subsequent five games, compromised further by a bad case of the flu.

But after missing the past two games against Carolina and Arizona, he’s healed sufficiently to leave no doubt about Sunday.

“There’s no way I’m not playing,” he said Thursday in the locker room before practice. “The team needs me this week. I gotta be out there with them. I’ll do whatever’s needed to help us win.”

In making a full commitment, Clowney, whose sports hernia is fixable only via surgery, is taking some financial risk.

Continuing to play increases the chance that he will be shut down for surgery, which not only hurts the Seahawks defense in the playoffs, it damages his market in free agency. He’s on the final year of his contract, and as part of the trade that brought him from Houston, the Seahawks agreed not to use the franchise tag to keep him in 2020.

“I’ve watched around the building what they do for the guys on this team,” he said. “It’d be selfish (to have in-season surgery), to not go if I could.  I’ll give them everything I got. If I didn’t, I’d be a selfish person. I ain’t no selfish person.

“I’ll give what I got, and let the chips fall where they may.”

Then there’s the pragmatic angle.

“If we get this one, it’s a chance to get a bye,” he said. “My whole game plan is to help us win this game to get a bye. Heal up, get the next (second-round playoff game).”

A vicory would also help justify the Seahawks’ commitment to the single-year gambles they made to win this season, including the Clowney deal, the free agent signing of DE Ziggy Ansah, the waiver claim for WR Josh Gordon and the late-season trade for FS Quandre Diggs.

The cumulative impact of those decisions has helped get the Seahawks where they aimed once the 2019 schedule was revealed in April: To the final week of the season against the Niners with a chance to win the division at home.

But the deed was accomplished with production from Clowney and Ansah that fell short of expectations, largely due to health.

They were part of a defense in the first meeting that forced three turnovers and held the 49ers to 302 yards, including OT. Each has caused disruptions that aren’t counted but nevertheless felt by offenses.

Still, there have been too many games where quarterbacks haven’t had their hairstyles mussed. The Seahawks’ 26 sacks are 30th in the NFL. Carolina leads with 52, and San Francisco is fifth with 47. And this time around, the SF offense has two Pro Bowlers healthy: TE George Kittle and LT Joe Staley.

Despite the shortfalls, all the Seahawks need is a win for a 12-4 record, a bye, a home field and a relegation of the 49ers to the fifth seed.

Clowney was heartened when he heard rumors of the pursuit of Lynch after the desultory 27-13 loss to Arizona.

“We lost both our backs — dang, that hurt us,” he said of Chris Carson and C.J. Prosise. “Now, we got two veteran backs who know how to take care of the ball and everything we preach around here.

“There’s not gonna be a big falloff.”

Clowney noticed the mood elevation in the locker room.

“There’s a buzz going on around here,” he said. “It’s big, seeing him. I just want to sit back and watch what he do. Watching his highlights, this dude runs extremely hard. Give him the ball, your eyes are glued on him — what’s he gonna do?

The Seahawks are just as eager to see the sequel to Clowney’s Monday night Oscar winner.