Thiel: Seahawks-Eagles match all about attrition

When low-profilers such as Ursua, Hollister and Homer are impact players, you know injuries have hit Seahawks hard. But it’s not nearly as bad as the Eagles’ health fortunes. 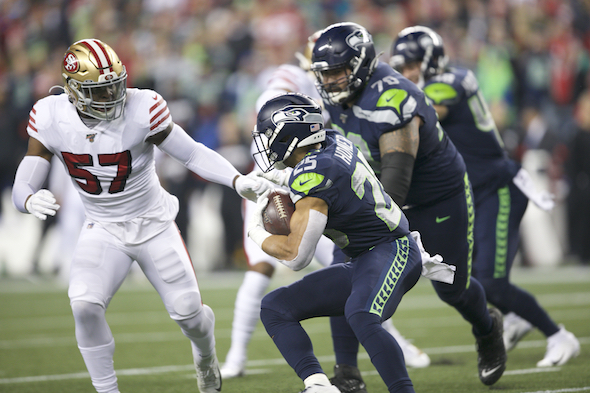 Sports fans understand that pro football has the highest rate of health casualties of any team endeavor, for all the obvious reasons. But the fact hit home fresh and hard in the Seahawks locker room Wednesday. The three guys garnering most of the media attention ahead of the playoff opener in Philadelphia Sunday were RB Travis Homer, WR John Ursua and TE Jacob Hollister.

Think back to August and where those guys were in the collective awareness of most Seahawks fans.

Rookie Homer was a sixth-round pick from Miami destined to be cannon fodder at a position stacked with veteran returnees Chris Carson, Rashaad Penny and C.J. Prosise.

Fellow rookie Ursua was a seventh-round pick from Hawaii who had to find room behind veteran returnees Tyler Lockett, Jaron Brown, David Moore and Malik Turner, as well as fellow draftees DK Metcalf (second round) and Gary Jennings (fourth).

Hollister was in his third season as a fringe player, acquired via trade with New England for a 2020 seventh-round pick. He was on the practice squad until Oct. 12, stuck behind Will Dissly, Nick Vannett, Luke Willson and Ed Dickson.

By Sunday, in the biggest game of the regular season for the NFC West championship against San Francisco, all had pivotal roles.

Homer, a 5-10, 200-pounder, led the game with 62 yards rushing on 10 carries, plus five catches for 30 yards. Ursua had his first career reception, an 11-yarder with 42 seconds left that missed the likely game-winning score by less than a yard when he stepped forward from the end zone into the field of play.

With 12 seconds left, Hollister missed winning the game by less than that. His reception at the goal line was halted by LB Dre Greenlaw. Another inch, and Seattle would have swept  the 49ers, won the NFL’s toughest division and been awarded the NFC’s No. 3 seed, hosting Minnesota Sunday.

A play earlier, Hollister was the victim in the egregious missed call of goal-line pass interference by LB Fred Warner that would have given the Seahawks a first down at the SF 1-yard line.

At his presser Wednesday, coach Pete Carroll sounded as if the NFL unofficially owned up to the whiff.

“That would’ve made everything a whole lot cleaner. It’s difficult for (officials) to put a flag down on the field. It’s got to be so egregious that there’s a standard to it. Had it been called on the field, (replay officials) never would’ve overturned that, from what I understand.”

Whatever the Seattle misgivings and lamentations about play and game outcomes in the 26-21 loss to the 49ers, the fact that these one-time bit characters are in spotlight roles highlights how much attrition influences the playoffs.

It can’t be said definitively that the regular starters would have executed the close plays better, but it does stand to reason. After 17 weeks of car collisions, bodies are strewn everywhere for all teams. Much will be asked again Sunday of Homer, Hollister and Ursua, as well as rookie LB Cody Barton, who will replace injured Mychal Kendricks in the starting lineup.

Bad as it has been for Seattle, no one among the 12 teams in the tournament has it worse than the Eagles. Yet they won their final four games of the season, while the Seahawks went 1-3.

Here is the list of Philly’s injured players from the beginning of the regular season, most of whom are on injured reserve, which means they won’t be back his year:

The exceptions are those who are listed as questionable for Sunday’s game at Lincoln Financial Field: Aruba, Charles Johnson, Sanders, Agholor, Ertz, Lane Johnson, Mills.

Two, starters, Hall and Brooks, went on injured reserve this week after injuries in the Eagles’ 34-17 win over the Giants Sunday that clinched the NFC East title.

Even from Nov. 24, when the Eagles lost 19-7 at home to the Seahawks, thanks largely to five turnovers, much has changed.

“Back then, we were a different team, from personnel standpoint,” said coach Doug Pederson Wednesday on a teleconference with Seattle media. “It’s a little bit different on tape when even Seattle’s watching us right now.

“They’re not making any excuses for the amount of injuries. We know this is a tough sport, and injuries are going to be a part of the game. They just come to work every day and prepare. They block out the noise. They do a great job of not listening to a lot of outside sources that are probably telling us that we can’t do anything.

“As a team, it makes us a little more galvanized as individuals, to be able to conquer just about anything.”

Carroll was lavish in his praise of Pederson’s repair job with the Eagles, who won the Super Bowl two years ago.

“They’re finding their way,” he said. “I think coach Pederson does a terrific job of using their people and their strengths. He’s very adaptable.  He really plays to his personnel really well. He gives them their best chance to be at their best. That’s a really, really good coaching job.”

Here’s a similar injury list from the Seahawks, equally as startling when seen in one glimpse:

Among them, Turner (concussion) and Diggs (sprained ankle) have a shot to play Sunday. Diggs would be a large help in anchoring the secondary, which played much better with his veteran experience.

“I’m not any different than any other guy that gets injured, or any other guy who’s playing this sport, knowing how physical and demanding this sport is,” Diggs said Wednesday.  “There are some things you just got to take and ride with it. I’m just glad that it wasn’t too long of an injury.”

Players and coaches from both teams aren’t looking for pity. It’s probably gamblers who are as woeful as anyone, because it’s hard to know what to expect from the roster’s tail-enders.

If Ursua had stepped back or Hollister had pushed forward, the Seahawks would have a different opponent, location and outlook about the playoffs. Russell Wilson and Bobby Wagner may make the biggest plays across a season, but by the time January rolls around, low-riders are suddenly are suddenly high-profilers.