Thiel: Return of Diggs a big help against Packers

The Packers at Lambeau Field in January — it doesn’t get better for newcomer FS Quandre Diggs. Who makes the Seahawks’ chances to win a whole lot better. 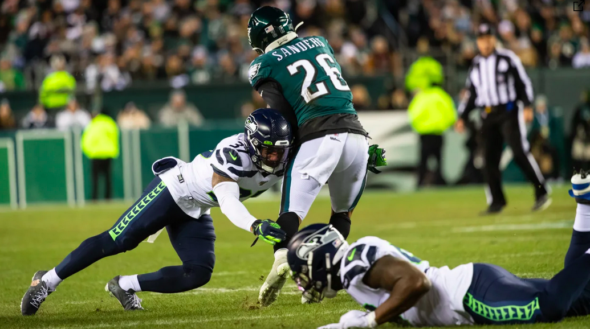 In the lexicon of pro football — or at least LB Bobby Wagner’s version of it — the predicted weather in Green Bay Sunday is not a snot-freezer, and therefore of minimal consequence to the Seahawks.

“I’ve never been in a game like that, where you sneeze and before the snot comes out your nose it turns into ice,” he said Wednesday. “As long as it’s not that, I think we’re going to be good.”

Wagner’s mucus-mustache reference was to the Seahawks’ infamous 2016 playoff game in Minneapolis, which, at minus-6 degrees at kickoff at an outdoor college stadium, was the coldest game in the Vikings’ considerable history with iceberg-ball.

That doesn’t seem to be the case for Wisconsin this weekend, where the Sunday forecast calls for a high of 24 degrees, light winds and a minimal chance of snow. For survivors of Ice Station Minny, the pending conditions are a trifle.

The Seahawks are drawing some warmth from a security blanket — Quandre Diggs, the free safety who returned from an injury absence (sprained ankle Dec. 15) to help deny the Eagles a touchdown in Seattle’s 17-9 playoff win at Philadelphia Sunday.

“It was amazing,” Wagner said. “It’s a guy that has been around the game for a long time. His communication, his experience, the way that he comes down and makes plays from the secondary position and tackles.

“His leadership has just been amazing for our team. He has been such a great addition to the team. But he still can’t beat me in basketball.”

He always claims he can out-hoop everyone.

Wagner, a five-time All-Pro selection, has more cred when he discusses how the defense performs with Diggs in the role of the legendary Earl Thomas. He’s not Thomas, but neither were Tedric Thompson, Lano Hill or Marquise Blair, all of whom manned the position at times this season, with less than salutary results.

Diggs, 26, is in his fifth NFL season from Thomas’s old school, Texas, where he was taken in the sixth round of the 2015 draft by Detroit. He was a three-year starter, at cornerback as well as safety, with the Lions until his surprising trade Oct. 23 to Seattle for a fifth-round draft pick.

The deal looks to stand as one of general manager John Schneider’s best in-season transactions, particularly his week, since Diggs played against the Packers and QB Aaron Rodgers seven times in NFC North matchups. The Seahawks are counting on Diggs’s previous encounters to pay off Sunday.

“He’s been out there with (Rodgers) a lot — he’s seen way more than we have over the years, recently so,” said coach Pete Carroll this week. “It will be valuable, like in the meeting room. He’s talking in there, analyzing. I’m sure he’ll have a lot to offer.”

In the five regular-season games when Diggs started at free safety, the Seahawks were 4-1 in part because the defense improved its coverages. Diggs has a knack for anticipating plays, and had three interceptions and forced a fumble.

He’s a really smart safety,” Wagner said. “He understands concepts really well. That is something that we noticed when he first got here. He was able to call out certain routes, certain plays in practice, and he has done it and games as well. His intelligence is just off the charts. A great addition to our team, for sure.”

Before practice Wednesday, Diggs betrayed no secrets about defending Rodgers.

“Just try to keep him in the pocket — easier said than done,” he said. “Everybody’s been trying to do that his whole career. Making him make those (harder) throws, which he can make.”

The Lions lost twice to the Packers, but each was by a late field goal.

“Detroit always played Green Bay tough,” Diggs said. “It’s how it always has been since I was there.”

Diggs is not buying the popular convention that Rodgers, by his considerable standards, is having a down year in the first season under new coach Matt LeFleur.

“It’s different — they definitely run the ball more,” Diggs said, referring to third-year RB Aaron Jones, who rushed for 1,084 yards. “A-Rod doesn’t have to be Superman. People are saying his numbers are down, but he’s still making big plays. Jones is doing tremendous things running the ball.

“If I was A-Rod, I wouldn’t care if my numbers were down if we were 13-3. I still see (Rodgers throwing) deep shots on film I’m watching. I understand you guys put it in an analytical way, but at the end of the day, he still takes deep shots.”

Even though Diggs has played at Lambeau Field numerous times, Sunday is different. It’s a childhood fantasy come true.

“I’m having a lot of fun,” he said. “Playoff football into January — I never did it before. It’s a new challenge, and something I’ve always dreamed of as a kid. Lambeau is a historic place. The atmosphere is dope. That’s what you see on TV as a kid: Man, it’d be dope to play in Lambeau in the playoffs.

“You gotta enjoy these moments. As a young player, you always think you’ll have these opportunities. But they’re far between. I have to tell myself to soak in these moments. As much as you want to be around your family, you’re not going to get these moments again. You can spend time with family when the time is right.”

He thinks Rodgers is a different dude on the home field.

“I think A-Rod plays better there — not saying he plays bad on the road,” Diggs said. “He just plays better in Lambeau. I think he feeds off the energy. When they introduce the starters on Sunday, you know it’s going to be crazy when he runs out of the tunnel. That’s a moment he lives for.”

Diggs has lived his lifetime for such a moment too. Imagine intercepting the great Aaron Rodgers upon the frozen tundra in a January playoff. Dope doesn’t get more dope.