Seahawks defense’s failure to disrupt opposing QBs led to passel of close games that relied too much on Russell Wilson. Can’t someone in blue get after those guys? 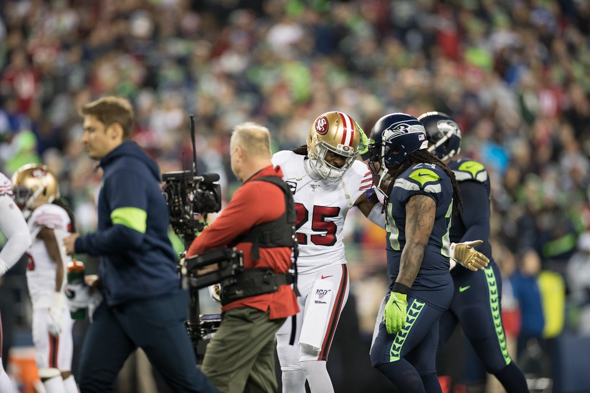 For Seattle’s want of an inch, the 49ers’ Richard Sherman gets a last laugh on the Seahawks. / Drew McKenzie, Sportspress Northwest

One of the great things about short-notice travel to and through the Midwest in mid-winter — let’s make that “the one thing” — is that the harried traveler often finds himself with unexpected time to . . . well, think.

Whether it’s slumped in a seat in a nearly closed airport, or behind a snowplow going 15 mph, or waiting in line at 1 a.m. to beg for a room at a crummy motel from a cranky overnight clerk, the mind is free to wander to more intriguing ideas.

Such as, say, the need to revivify the Seahawks defense.

Some will says that that is another unpleasant thought. Others will suggest it is an obvious one. For sure, such a thought would seem to be in alignment with coach Pete Carroll, even though he didn’t have the advantage of empty hours ahead of hooking up the dog teams to sled out of American Siberia.

I bet he must have been thinking about it awhile.

As a defense-first coach, Carroll had to be shocked at finishing the regular season 26th in yards surrendered. The lost real estate was mitigated some by a plus-12 in turnover differential, tied with the Packers for third-best. But that turned into a nothingburger late — the Seahawks picked up zero turnovers in the final four games, including the two playoffs.

“There’ll be some of everything — a little bit of everything,” Carroll said Monday at his annual post-mortem, regarding the need for defensive changes. “We’re going to work hard at it. It’s difficult to adjust some things in the middle of the year.”

In September, the Seahawks thought they made adjustments, especially on the D-line, to compensate for the trade of top sacker Frank Clark. They acquired three players primarily to get after quarterbacks — Ziggy Ansah in free agency, L.J. Collier in the draft’s first round and Jadeveon Clowney in a trade that rocked the NFL.

By the end of the season Sunday in Green Bay, neither Collier nor Ansah were active. Clowney, diminished for weeks by a groin/core injury that will be surgically repaired as soon as next week, Carroll said, had a solid game in the 28-23 loss to the Packers. But he was never the pass rusher he was believed to be.

Add in a poor season by DT Jarran Reed, suspended the first six games by the NFL for an incident of domestic violence, and the Seahawks’ total of 28 sacks, tied for 29th in the league, become the single most tell-tale stat regarding how ineffectual was the disruption. In the playoffs, they had seven against the broken-down Eagles offense, but the two Sunday against Aaron Rodgers and stopped only one series.

Behind the line, the defense was hurt late by the hamstring injury to LB Mychal Kendricks, forcing into action rookie Cody Barton, for which he was largely unready. The secondary had good seasons from CB Shaquill Griffin and SS Bradley McDougald, but free safety was a mess until the trade for Quandre Diggs, yet he played only five games, plus two in the playoffs.

Then there was CB Tre Flowers.

A game after drawing two interference penalties that cost 59 yards against Philadelphia, he was lit up by Rodgers. Targeting Flowers frequently with shots to star WR Davante Adams, Rodgers helped Adams set a franchise playoff record of 160 yards on nine receptions.

A two-year starter after his conversion to corner from college safety to corner, Flowers isn’t working especially well. Carroll was uncharacteristically direct.

“We’ve got to get better,” said Carroll when asked about his message to Flowers, a fifth-round pick out of Oklahoma State. “It was hard (Sunday). They ran some good stuff at him.

“Settle in. That’s what I was talking about, going into the game. Trying to do a nice job of getting him settled down. This is two big years that he’s had. He’s going to continue to get better. He’s a really smart player, he’s tough as hell. He’ll make good progress, I think, from the year two to three.”

Then again, as Carroll ever publicly forecasted a player’s decline?

The same lack of clarity prevails for Collier, who injured an ankle in preseason and never contributed much of anything.

“I think he just needs to be in there,” Carroll said. “Get all of camp, get everything organized. We would like to play him inside and out. I already talked to him about making  the kind of jump that Rasheem (Green) made from year one to year two. I thought Rasheem had a terrific season this year.

“Hopefully L.J. will make the same kind of advance.”

The Seahawks can ill afford to throw more resources at fixing the pass rush — unless they enjoy having Malik McDowell’s name bought up unto eternity. Clowney and Ansah are free agents, and Carroll sounded as if they will go hard to keep Clowney.

“He’s a terrific football player and he had a big impact on us,” he said. “We would love to have him back. He loves it here and he wants to be here.

“He dropped up to see (general manager John Schneider)  just to let him know how important it was to him. He had a great time. Everybody in here, they had a ball competing together.

“It’s interesting to see the new guys that come in, because they’re more surprised by the environment.”

Seattle is well established as a good place to play. But in the past two seasons, playing well on defense has been relatively rare.

“We were not consistent,” Carroll said. “Too many explosive plays of various natures. For the most part, we had problems on the edge. We had containment issues. We found that the offenses really put the ball on the perimeter against us a lot. That does challenge us in some ways.”

Absent a defense that can harass a passer and deny most explosive plays, the whole Seahawks enterprise staggers into perilously close games. Too much pressure was put on QB Russell Wilson to throw early and often, especially after all three running backs were lost in December. The emergency re-hire of Marshawn Lynch was a novelty act, not a solution.

Obviously a 12-6 mark that finishes in the final eight is a good season. But as long as Wilson is healthy, the chance for greatness looms because margins at other positions are so small throughout the NFL.

Who knows what would have happened if the Seahawks had managed another inch for a touchdown Dec. 29 to sweep the 49ers and get a bye? Carroll certainly wondered.

“Unbelievable separation between where you would be, to where you wouldn’t be, because of (the loss to the Niners) — it was amazing,” he said. “Maybe that would’ve propelled us. Getting another week off might have been a big deal.”

It would have at least averted a short-notice trip to Green Bay. For that alone, the traveling media entourage would have forgiven Carroll his trespasses with challenge flags, timeouts and delay of game penalties.