As a third manager gets axed in the fallout from the Astros’ signal-stealing scandal, Commissioner Rob Manfred’s punishments overlook some principal figures. 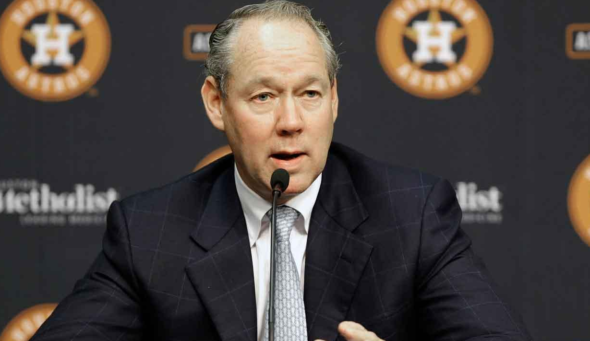 When it comes to new frontiers of misbehavior — weaponizing the in-game banging of garbage cans certainly qualifies, especially when it goes undetected — the office of the commissioner of Major League Baseball has an emergency tool. The commish is authorized to deal punishment, based on his judgment of the facts, “in the best interests of baseball.”

The phrase is deliberately broad and undefined, much like the phrase “high crimes and misdemeanors” in the U.S. Constitution. Because, to use a legal description, you never know what crazy-ass things crazy-ass people will do to advance their personal interests at the expense of honor. Best to keep the net wide.

Following Thursday’s news that Carlos Beltran had been fired from his new job as New York Mets manager — before he even made out his first spring training lineup — to become the third MLB manager axed in the Houston Astros sign-stealing scandal, it looks as if the blotch on ball has grown to the size of Texas.

Previously fired his week were managers A.J. Hinch of the Astros and Alex Cora of the Boston Red Sox. In 2017, when the use of electronic devices began, Cora was a coach with the Astros and Beltran a player. Also fired was Houston general manager Jeff Luhnow.

But the punishments laid out in Commissioner Rob Manfred’s nine-page summary of the MLB investigation, which included 68 interviews, were noteworthy for what was not included.

There was no vacation of the Astros’ 2017 World Series title. Nor were sanctions levied against the position players who benefited from knowing what pitch was coming from the clanks upon the dugout garbage cans, once the signs were decoded off a secret video system.

Nor was there personal consequence for Astros owner Jim Crane. In fact, Manfred went out of his way to exonerate Crane, whose name was the first one mentioned in the report because he claimed he knew nothing about the scheme. From the Manfred report’s first page:

At the outset, I also can say our investigation revealed absolutely no evidence that Jim Crane, the owner of the Astros, was aware of any of the conduct described in this report. Crane is extraordinarily troubled and upset by the conduct of members of his organization, fully supported my investigation, and provided unfettered access to any and all information requested.

Crane is, of course, one of Manfred’s 30 bosses. And that’s part of the problem. The investigation was not independent.  When it comes to determining ownership culpability, Manfred is immediately suspect.

Regarding sanctioning owners, Manfred certainly can’t hide behind a lack of precedent.

One of the most notorious episodes of owner malfeasance was in 1991, when Commissioner Fay Vincent banned Yankees owner George Steinbrenner purportedly for life for his outrageous stunt against one of his own star players.

George Steinbrenner was permanently banned last night from control of the most famous team in sports because he secretly paid a Bronx gambler $40,000 for helping the Yankee owner’s renegade investigation of Dave Winfield.

“He did something to harm baseball and he has to pay the price,” said baseball Commissioner Fay Vincent, who announced his action against Steinbrenner at a packed news conference at the Helmsley Palace Hotel. “He knew, or at least should have known, that if the payment were exposed, it would bring disrepute to him and therefore to baseball.”

Vincent was invoking “his best interests of baseball” powers. While the circumstances were different, because Steinbrenner was directly involved in attempting to dig up dirt on Winfield (the lifetime ban was subsequently reduced to two years), the damage done to baseball’s credibility by Crane’s organization was much more significant than Steinbrenner’s childishness — the Astros’ advantages may have denied the Los Angeles Dodgers a World Series win.

It was the second episode of national embarrassment by the organization. Last October during the clubhouse celebration after the Astros won game 6 of the American League Championship Series over the Yankees, assistant general manager Brandon Taubman taunted a group of female reporters about Astros relief pitcher Robert Osuna, an alleged domestic abuser. He yelled repeatedly, “Thank God we got Osuna!” He had been acquired a year earlier while serving a 75-game suspension for DV charges.

When one of the reporters published an account of the episode in Sports Illustrated, Taubman and the Astros denied the story, calling it “misleading and completely irresponsible.” But when other eyewitnesses confirmed the story, the Astros backtracked, then confirmed it when Taubman owned up. He was fired, and a week after the episode, Crane apologized to the reporters in person.

The organization’s conduct drew a scolding from Manfred in the report:

It is very clear to me that the culture of the baseball operations department, manifesting itself in the way its employees are treated, its relations with other Clubs, and its relations with the media and external stakeholders, has been very problematic. At least in my view, the baseball operations department’s insular culture – one that valued and rewarded results over other considerations, combined with a staff of individuals who often lacked direction or sufficient oversight, led, at least in part, to the Brandon Taubman incident.

The Astros have won 101, 103 and 107 regular season games in the past three years, playing in two World Series, winning one. Houston should be MLB’s shining city on the hill; instead they are the Asstros.

They aren’t the first team and won’t be the last to cheat, and to bully. But if Manfred had Vincent’s guts and suspended Crane and miscreant players, he’d have a splendid start on a zero-tolerance policy that would resonate with 29 other franchises.