Nick Rolovich is a big fan of the ‘Cougar climate’

The Mountain West Conference coach of the year at Hawaii, Nick Rolovich takes over at Washington State with an apparent understanding of the Apple Cup drought. 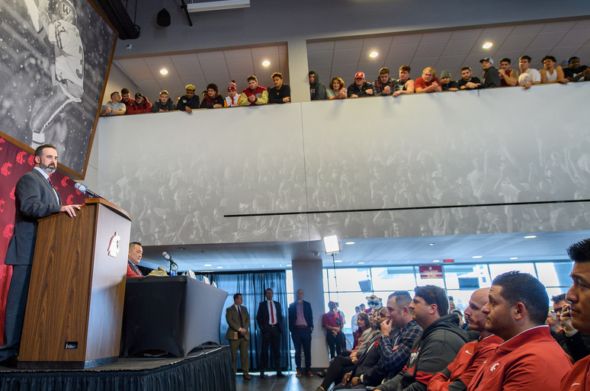 The new Washington State head football coach is Nick Rolovich, who last coached the  Rainbow Warriors in the Mountain West Conference. It will be much colder and wetter in Pullman during the fall and winter than he’s used to. Yet Rolovich says he’s looking forward to being a Coug.

“What attracted me here is not the weather, it’s the climate. The Cougar climate,’’ he said at a press conference Thursday. “The passion that I’ve seen since I stepped foot in this city, on this campus. The fan base. The students, why they make it such a hard place to play for opponents. The flags waving all over town. That iconic logo – you can’t go anywhere without seeing it.

“There’s a togetherness here that was real attractive for me to be a part of.’’

A native of Novato, CA, Rolovich, who turns 41 in February, is the 33rd coach in WSU football history: “I’m honored to walk in the footsteps of great names like (Jim) Sweeney, (Jim) Walden, (Dennis) Erickson, (Mike) Price and my man, Mike Leach.’’

Leach left WSU last week to coach Mississippi State, after eight seasons and a 55-46 record. He took the Cougars six bowl games, losing four, including the Cheez-It Bowl in December against Air Force. He also lost the past seven Apple Cups in a row to Washington.

Leach certainly had better success than the previous Cougars coach, Paul Wulff, who went 9-40 in his four seasons. Prior to Wulff, Bill Doba was 30-29 over five seasons.

A former quarterback who played two years for City College of San Francisco and then the University of Hawaii, Rolovich also went on to play in NFL Europe, helping the Rhein Fire to the 2003 championship game. He also played in the Arena Football League, was an assistant at San Francisco, Nevada and then Hawaii, where he became head coach in 2016.

His four years included 28 wins, compared to 11 in the previous four. The Rainbow Warriors were 10-5 this season and beat Brigham Young 38-34 in the Hawaii Bowl. He was named the conference’s coach of the year.

Hawaii averaged 33.9 points a game per game and beat Pac-12 teams Arizona and Oregon State, then lost 52-20 to Washington. The defeat was evidence of his his team’s defensive struggles. They gave up at least 50 points 11 times in Rolovich’s four seasons. At least he’s familiar with a similar problem in the Palouse: The Cougars allowed 329 points to Pac-12 teams last season, when WSU went 3-6 in conference.

His offense is the run-and-shoot, a cousin to Leach’s Air Raid.

“He’s a real genuine coach, you can tell he’s a players’ coach,” WSU linebacker Jahad Woods told a reporter. “It’s different than what we had previously. He’s working to get to know us and having a relationship with us.’’

Rolovich’s presser Thursday was enjoyable, offering smart, interesting things about the team and school, with occasional bits of humor. He also talked about players’ lives after they finish college.

“What is the vision moving forward?’’ Rolovich said. “Simply, I know we need to win football games. I get that. We also have to raise these young men to be tomorrow’s fathers and husbands and community leaders . . . We’re looking for young men who are attracted to the values that this university can provide them. It’s a tremendous land grant university. About access and opportunity. They have to have something outside of football.’’

The Cougars joined the Huskies in replacing head football coaches in the off-season. Chris Petersen shocked the college football world by stepping away from UW Dec. 23. He was immediately replaced by promoting defensive coordinator Jimmy Lake, a Cougars nemesis.

“Three numbers: 317,” Rolovich quickly answered. “That’s how many days until we get to play it.”

The quick, clever retort was what Cougars fans wanted to hear. Leach never seemed to take the rivalry as seriously as fans. The seven losses in a row have been routs, Leach never seeming to adjust his game plan to account for Washington dropping eight defenders into coverage.

But Rolovich tried to diminish the tactical distinction, and his role.