Critics of Pete Carroll’s playcalling say he’s wasting Russell Wilson’s peak years by not relying on him more. Really? The Seahawks need him to do less, not more. 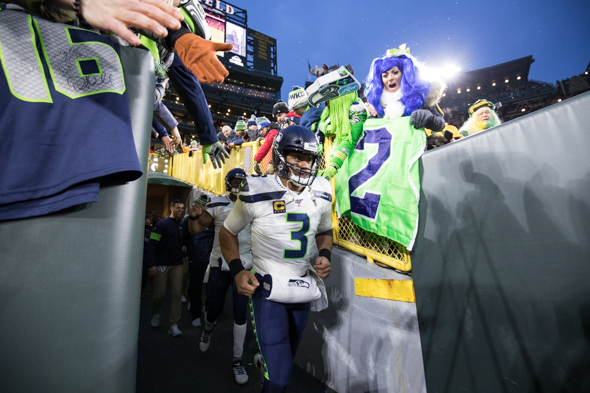 Apart from game outcomes, the most remarkable team feat so far in the NFL playoffs was the 285 yards of rushing the San Francisco 49ers laid on Green Bay Packers in the NFC Championship. In the days since, it resonates a little more in Seattle because numerous post-mortems about the Seahawks have lamented that the 49ers’ rushing success will encourage the worst instincts in Pete Carroll next year.

The fear is that the Seahawks coach will squander another of Russell Wilson’s peak seasons by continuing to resist the  makeover from Fred Flintstone to George Jetson. The theory is that Wilson is so good at what he does that the Seahawks need him throwing (and running) more than they need Chris Carson and Rashaad Penny running and injuring.

NFL analytics point to pass plays per attempt being more productive than runs, as well as Wilson’s efficiency reducing the pass-risk factor. The facts were buttressed this week when Pro Football Focus anointed him as its Most Valuable Player, based a WAR calculation similar to baseball. That’s right — better than wunderkind Lamar Jackson. 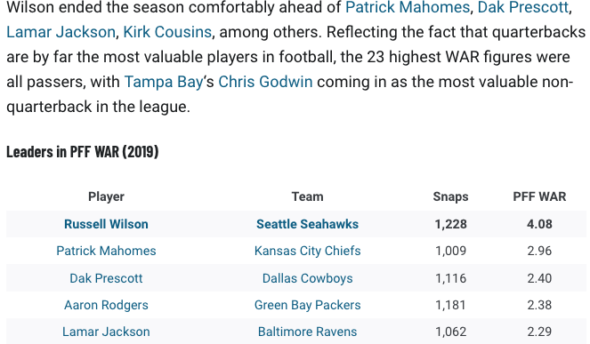 The case is hardly unreasonable, but it overlooks some stuff.

The reason Wilson is so valuable for Seattle is because he is so much better than any other Seahawks weapon. He also is paid much more than anyone, creating a payroll bulge that has negative down-roster consequences under the salary cap.

After Wilson signed his extension making him the game’s highest-paid player, skeptics said the Seahawks can’t win a Super Bowl that way, which Carroll took as a direct challenge. The skeptics are right so far, but Carroll came a lot closer than many imagined, a healthy RB here or an inch there and they would be taking their talents to South Beach.

Nevertheless, the payroll decisions to accommodate Wilson hurt. To cite one obscure but relevant example, the slot cornerback position is never a big deal until a team doesn’t have one.  They had a good one in Justin Coleman, but he left in free agency for Detroit, which gave him a four-year deal worth up to $36 million, with $17.9 million guaranteed.

It’s hard to say directly that Wilson’s salary forced out Coleman, but it’s easy to say the Seahawks never backfilled that spot. They brought in free agent CB Jamar Taylor on a one-year, $805,000 deal and convinced themselves that LB Mychal Kendricks was good enough in pass coverage that they could play their base 4-3 defense more than any team in the NFL, working around Coleman’s absence, and get away with it.

They couldn’t. Kendricks got beat a lot, Taylor was fired after week 10 and rookie CB Ugo Amadi, who may become a good player, found himself toasted by Green Bay star WR Davante Adams on a critical third-down pass completion late in the fourth quarter that helped end the Seattle season.

Not saying they shouldn’t have paid Wilson, but the inability to afford Coleman was a little-appreciated reason the Seahawks defense was often so crappy this year. That’s how choices work under the salary cap.

Wilson’s out-sized value to the franchise is a reason NOT to subject him to more payload responsibilities. In the second half of a cold night at Lambeau Field with a wounded line, a kid tight end and an old running back not long off the couch, he took the Seahawks on three long touchdown drives to get back in the game, and a fourth was thwarted by a drop and a sack, neither his fault.

And he’s supposed to do more?

“It gave us a shot to go win a game on the road in a situation where it didn’t even look like it would ever be possible,” Carroll said after the game. “I say all that because that was us this season. That was this team.”

Sure, it was coincidence, but it conveniently illuminates the greater point regarding Carroll’s playcalling preferences. He wants an offense like he had in 2012-14, and like the one the 49ers have now — balanced, so that they can win however the matchups, health and conditions dictate.

Wilson is at his devastating best — throwing precision long balls into tight windows better than any QB in the NFL — when the defense has to respect the threat of the running game, which buys him the extra second.

That’s how a team should treat the highest-paid player in NFL history: Give him something that he can’t give himself.