The early injury absence of OF Mitch Haniger casts a shadow on the Mariners, who know something about shade. But Jerry’s Kids are about to spring some sunshine, he says. 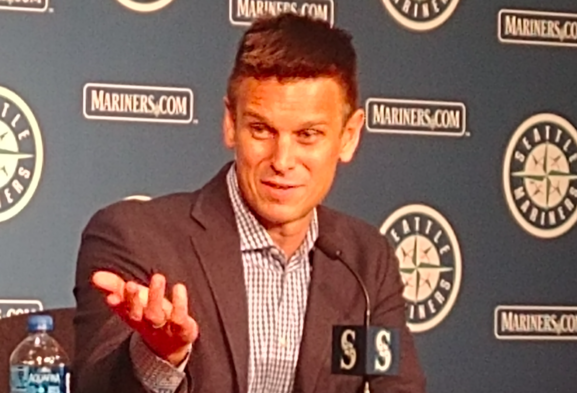 Mariners GM Jerry Dipoto cautioned Thursday that 2020 might look a little like 2019 before they get to 2021. / Art Thiel, Sportspress Northwest

No international games. No overwrought farewells for one-time heroes. The ways to celebrate Edgar Martinez’s Hall of Fame induction will dwindle to maybe half a dozen. There won’t even be the bearded-lady novelty of a real All-Star such as big-bucks Edwin Encarnacion passing through town for a few games until a good team panics during the season and trades for him.

General manager Jerry Dipoto said Tuesday that the Mariners will be paying $40 million in salaries to players playing elsewhere. Dunno if that leads MLB. But it’s something over which to marvel. Sorta.

At least in 2020, there’s the distraction of Houston Asstros. Or Asterisks, if you are polite.

The genuine-article villains will play the Mariners 19 times, nine at T-ball Park, including four starting April 30. Fans will have the opportunity to heckle, mock, condemn, provoke, insult and agitate the defending American League champions for cheating the game. A sort of Alex Rodriguez Times Nine hate-fest, and what longtime Seattle baseball fan can’t get into that?

The Asstros were 18-1 against the Mariners last year, an outcome that would have been almost completely reversed had the Texas devils refrained from stealing the signs of Mariners catchers.

Maybe fans can believe in this from Dipoto, speaking Thursday at the club’s annual pre-spring training media lunch.

“We don’t do it (cheat),” he said, answering the inevitable question the Asstros have inspired for every MLB team this month. “I feel very confident that we’ve stayed above reproach. We will continue to do that. And that’s about all I have to say on that.”

The Mariners are so true to the blue that not only don’t they cheat, they dole out $40 million to help other teams. Why doesn’t MLB have a Lady Byng Trophy like the NHL does, honoring sportsmanship? The Mariners could have won several by now.

For a franchise that is closing in on the 20th anniversary of its most recent playoff win, one would think its meritorious work in other ways would inspire something more than the annual participation ribbon.

Alas, no. Even fans failed to appreciate the more subtle virtues. The Mariners lost from the previous year about 500,000 in attendance to about 1.8 million, 20th in MLB, down from 14th.

For a 68-94 team that led this portion of the galaxy in errors, strikeouts, misplays and exploding cigars, which ended up with only 13 players left from the 30 that opened the season in Tokyo, 1.8 million is a decent count.

But, absent the shiny objects of 2019, how many fan will show to watch the Mariners not contend again, as Dipoto all but promised Thursday?

Here is #Mariners GM Jerry Dipoto from last January, and then this January. This is why fans often get frustrated with the lip service they receive. pic.twitter.com/2tT7OeeEjT

According to gambling site betonline.ag, the Mariners are predicted to win 67½ games, a total fewer than all but five teams (Kansas City, Miami, Detroit, Baltimore and . . . Houston, because they don’t have a manager, ran out of honor and don’t get a betting line — yet). So the Mariners are forecasted for a two-year flat-line.

And that was before the Mariners learned Tuesday they will start without one of the few quality holdovers from a season in which the Mariners set an MLB record by using 67 players.

OF Mitch Haniger is having surgery that will cost him six to eight weeks following an injury Monday in a workout. The core injury is related to the testicle he ruptured June 6 when struck by a foul ball.

“Mitch was in the midst of what I think was perhaps his best off-season, certainly since he’s been with the Mariners,” Dipoto said. “All of his metrics, the test scores, the athletic explosiveness were off the charts.”

He was an All-Star in 2018, had a slower start in 2019 before the injury, and now this. At 29, he’s still in his prime, but the lingering consequences of the injury casts a pall even before spring training begins.

Dipoto said the Mariners are likely to scrounge about for veteran help alongside CF Mallex Smith, the only sure thing in the outfield.

Other than that, the Mariners might look for a starter to compete for the fifth spot in the rotation behind returnees Marco Gonzales, Yusei Kikuchi, Justus Sheffield and newcomer Kendall Graveman, 29, signed as a free agent Nov. 26. He was 23-29 with 4.38 ERA in four years with the Oakland A’s.

Relative to his hurricanes of past off-seasons, Dipoto’s winter was more like a tropical zephyr.

“There are couple of opportunities in front of us that could down in the next 48-72 hours or it could be next week,” he said. “We’ve been —  what has (seemed) to most people — shockingly patient in waiting for the right person on the right contract at the right time for the Mariners.”

In large part, the relative calm is because the flush of veterans contracts in 2018-19 has left room to play numerous heralded kids, among whom Dipoto has staked his Seattle career.

J.P. Crawford, 25, is established at shortstop. Shed Long, 24, will be locked into second base. Evan White, 23, who played at AA Arkansas all last season, was given a six-year deal for up to $55 million and is a virtual guarantee at first base. OF Kyle Lewis, 24, who had six homers and 13 RBI in 17 games in September, is a candidate at one outfield spot. Jake Fraley, 24, and Braden Bishop, 26, will compete for the other spot around Smith, 26. DH Daniel Vogelbach is 27 and C Tom Murphy is 28.

The top two youngsters in the organization, outfielders Julio Rodriguez, 19, and Jarred Kelenic, 20, rated eighth and 11th, respectively, in Baseball America’s latest MLB top 100 prospects, will stay in the minors this season — unless they go “in a very Ken Griffey Jr. 1989 sort of way,” Dipoto said, referring to The Kid’s breakout spring training.

Dipoto pridefully claimed the Mariners were going from the AL’s oldest lineup three years ago to what may be its youngest. That’s yet another plaudit, youth employment, to add to the list of playing with honor and giving their money to others.

Gee whiz and gosh darn, these are swell chaps. Now let’s see how dirty they’re willing to get putting out an 18-year tire fire.