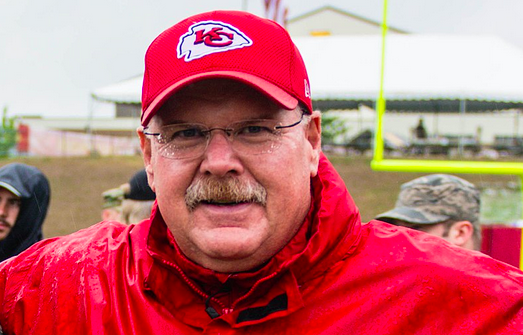 So well regarded was Andy Reid that he received a cake and a standing ovation upon his firing in Philadelphia.  / Wiki Commons

I’d like to see the San Francisco 49ers win the Super Bowl.

As a writer in Seattle, it would be great fun to have the NFL champs in the NFC West. Twice next season, Seahawks games would be cataclysms rich in thunderbolts, bombast and hysteria, and a secret plan to keep in town Jim Harbaugh as Niners quality control coach/spy, after he gets fired for Michigan’s loss in Washington’s season opener.

But if I were a fan Sunday, I’d want the Kansas City Chiefs win the Super Bowl, because it would mean so much to coach Andy Reid, even though he’d rather drink bleach than admit such a thing.

Reid is the most compelling figure in the Miami hootenanny, as well as arguably the best coach to never win a Super Bowl. Plus, it’s been 50 years for Chiefs fans, who look at aggrieved Mariners fans and offer a dismissive smirk.

I think Reid will do it.

His arsenal for LIV includes a similar difference-making weapon that Seahawks coach Pete Carroll had in XLVIII — a mobile, accurate quarterback on a rookie contract who was born to lead. That set of virtues isn’t the only way to get a Lombardi Trophy, but the cool thing is it may give him a better chance to do it the following  year, should KC decide to throw Sunday from second-and-goal at at 1. (Don’t tell me it’s too soon; laugh, people, it’s therapeutic).

But after the 2o12 season ended 4-12, the Eagles fired him after 14 seasons. Four days later, he was hired by Kansas City, where he’s had six consecutive winning seasons and five playoff appearances in a row.

The final season in Philly was excruciating because a month before the season, his oldest son, Garrett, 29, died of a heroin overdose. Despite urgings from many to take time away after the tragedy, Reid insisted that doing the thing he seemed born to do was the best therapy.

Which made it even harder at the end of the season when Eagles owner Jeffrey Lurie decided Reid’s Philly tenure had run its course.

But the exit was handled in a way different than any other dismissal I’ve heard about in the NFL, or any other sport. Monday in Miami, Lurie explained the scene to the Philadelphia Inquirer.

The owner put his arm around Reid and walked him to the team cafeteria, where the entire staff was assembled for a farewell, complete with a standing ovation, a cake, and a football signed by everyone in the Eagles’ organization.

“Tears and hugs,’’ Lurie said. “I’ll always remember bringing the employees together and them giving him a standing ovation on his last day. That meant a lot to him and to us.

“From the day he got there, he was beloved in that building, and appreciated. His work ethic, his attention to detail, his caring about individuals on a human basis; things the public never has easy access to or gets to see.”

Again, Reid was implored to take time off by his friends, including Mike Holmgren, who recommended that Lurie hire Reed, a protege, in 1999 after Holmgren passed on the job to become the Seahawks head coach. Again, Reid carried on, to Kansas City.

“I didn’t advise him because I always feel with Andy, he knows best about what’s best for him,’’ Lurie said. “I was a little surprised he wanted to get right back into it and not take a year off. But he knew himself better than any of us did.’’

Joe Banner, who stepped down as Eagles president the year before, was among those rebuffed.

“Everybody I know was telling him the same thing,” Banner told the Inquirer. “But he was like, ‘This is what I do. I’m ready to go. Sitting around with all that idle time would be deadly to me.’”

“He proved that he knew himself better than everybody else.”

A year ago, the Chiefs lost the AFC Championship at home 37-31 in overtime to New England. The chance for redemption, and to fulfill Reid’s legacy, is high up on the to-do list for KC players.

“A huge part of me wants to win one for him,” veteran OT Eric Fisher said. “It’s the one game he hasn’t been able to check off his list, and to be a part of that for a coach that’ll probably go down as a legendary coach, to be a part of that, it’s something I’ll remember forever.”

Those who have worked with or for Reid have no doubt where their sentiments reside Sunday. The casual fans who may watch their only football game of the year Sunday need to get on the bandwagon.