Marco Gonzales is not intimidating, flamboyant or a fluke. What he is to the Mariners is an easy risk worth taking with a contract extension. They have to start somewhere. 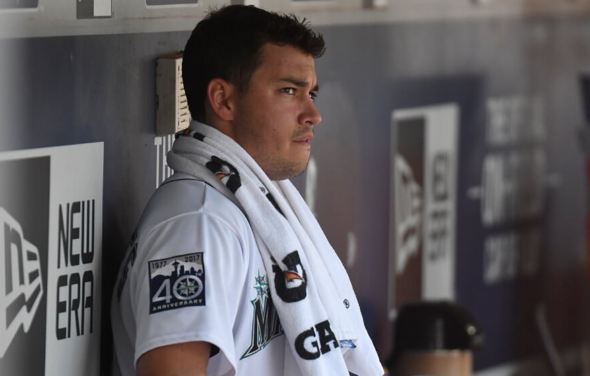 Marco Gonzales is not as imposing as Randy Johnson, nor as animated as Felix Hernandez. Nor is he a fluke like Paul Abbott, who had 17 of his 43 wins in an 11-year MLB career in one season (Seattle, 2001).

The one successful Mariners predecessor Gonzales seems to evoke is Jamie Moyer, projecting an earnestness that can bend silverware. A guy has to be earnest to be the winning pitcher, for Rocky Mountain High School in Fort Collins, in all four of his years in Colorado’s state high school championship game.

To concentrate that hard, that long, that young, one must be earnest. A stalwart.

Just as one must be earnest to pitch in MLB, as did Moyer, until age 49.

Now, earnestness doesn’t sell many tickets. But it does beget a four-year contract extension worth $30 million. And to sign such a deal with the woebegone Mariners . . . friends, that is earnest.

The plan is that the more spectacular youngsters the Mariners are growing — top prospects Jarred Kelenic, Julio Rodriguez and Logan Gilbert — will sell tickets.

Gonzales, a former star at Gonzaga, will sell the players on sticking with Seattle.

Because he is now, at 27, affirmed financially as staff ace and team anchor, carrying on the legacy of Johnson, Hernandez and Moyer, as well as the job future of general manager Jerry Dipoto.

“The thought is to keep this core of players together and make that our theme — this is our story,” Dipoto said a press conference Tuesday afternoon. “These are our guys, and we think this is going to be a championship club.”

There you have it. Dipoto is on the record that, health permitting, he has his guys to deliver Seattle fans from baseball evil. Amen.

Gonzales’s extension is the first serious financial commitment to a proven player in the step-sideways year that follows the step-back, 68-win season in 2019.

“We’re not going to be OK with a loss. We understand it’s a process, but it’s not our job to worry about where the ship is being steered. We’re just rowing the boat.”

Somehow, amid a breathtaking amalgam of bad offense, bad defense, injuries and odd personnel decisions of the past two seasons, Gonzales has a 29-22 record and 3.99 ERA in 63 starts. His career-high 203 innings last season — only 11 MLB pitchers had more — is mindful of a Terminator that emerges intact and striding firmly from a blazing tanker truck.

“Marco has been as consistent a pitcher every fifth day as we could have hoped for these last two years,” Dipoto said. “Along the way, we found out a lot about who he is as a person and player, and how much he relishes that leadership role.”

The long term creates a foundation for some leadership by Gonzales on a roster of  perpetual churn. For the Mariners, they get a good deal on a pitcher entering his prime years without the typical burden.

According to a luxury tax payroll calculation by spotrac, the Mariners’ 2020 salary figure of $108 million, including $27 million paid to players not on the team, is 24th in MLB. The Yankees lead at $258 million, and the Pirates trail at $67 million. So the Mariners have plenty of room to lock up their top-tier prospects who are willing.

Earlier in the off-season, the Mariners signed 1B Evan White, who has yet to play a major league game, to a six-year, $24 million deal, so sure are they of his future. Apparently, that’s part of the plan — lock up premium players ahead of their best years instead of after them.

“That’s absolutely the idea,” Dipoto told MLB.com. “I won’t say who they are, but the thought is to keep this core of players together . . . We want to start putting together this foundation and this is, for lack of a better way to put it, a sign that we’re putting our money where our mouth is.”

As much as any pitcher can, Gonzales has proven he’s worth the investment. The youngsters are a higher risk, but who else do you want to get your ticket money — Robinson Cano?

For the non-seamheads, the Mariners are a like the start of the average big-city marathon race, a mass of similar-sized lookalikes. Real distinctions won’t sort out until more than 20 miles down the road.

But in the first 500 meters, Gonzales is in the lead. He’s the most earnest one.