The Sounders won two of three awards voted on by the public at the 85th Sports Star of the Year, and University of Washington’s Sis Bates was Female Athlete of the Year. 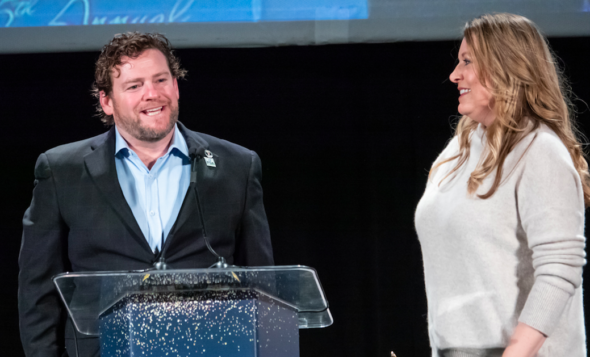 The Mariners are doing a massive makeover, the Seahawks dealt with a pileup of broken running backs and the Huskies and Cougars are, well, rethinking their approach to both football and men’s basketball.

With the generous opening provided by these traditional headliner teams in 2019, welcome to Seattle, a certifiable soccer and softball town.

At the 85th version of the MTR Western Sports Star of the Year event Thursday night at the sold-out Westin Seattle, the Seattle Sounders treated center stage like an unoccupied goal.

They scored in two of the three awards determined by public online vote —  Story of the Year, by collecting the second Major League Soccer Cup championship in franchise history, and in the Male Athlete of the Year category, with their effort propelled by high-scoring forward Raul Ruidiaz.

Joining them in the sporting spotlight was the University of Washington softball program, which provided the Female Athlete of the Year in slick-fielding shortstop Sis Bates. She turned a nifty double play last season by earning her second consecutive All-America selection and the Pac-12 Defensive Player of the Year reward. 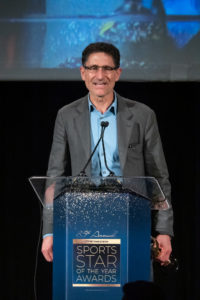 The SSY voting typically rewards at least one player from the highest-profile teams each year: A Seahawk, a Mariner or a Husky or Cougar football or basketball athlete. That didn’t happen for the first time since 2010, when UW baseball pitcher Tim Lincecum, Olympic short-track speed skater Apolo Anton Ohno and Seattle Pacific University cross country runner Jessica Pixler were the award recipients.

It shows how determined Seattle is to present itself as a well-rounded center of sporting excellence, which was the intention of Royal Brougham, the late Seattle Post-Intelligencer sports editor who founded the event in 1936.

The event also included as first-time emcee Ohno of Federal Way, the most decorated athlete in U.S. Winter Olympics history.

Sounders owner Adrian Hanauer took the team bows and offered an acceptance speech for the franchise because his club was in training camp, preparing for the defense of its MLS championship that begins in March. 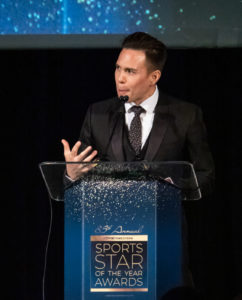 “I’m sort of surprised because there were so many amazing stories this year,” said Hanauer, a Seattle native who thanked his coaches, players and franchise employees. “To have won that championship in front of 69,000 fans, it was absolutely tremendous.”

Seattle’s pro soccer team was feted just three months following its thorough 3-1 title-game thrashing of FC Toronto at CenturyLink Field. On that glorious Sunday afternoon in November, a record crowd of 69,274 roared as Kelvin Leerdam, Victor Rodriguez and Ruidiaz provided goals to secure the title and create a citywide frenzy.

It marked the Sounders’ second MLS championship in four years, the other coming over the same Canadian team in Toronto. It was added reward for Seattle FC, which has made the playoffs for an MLS-record 11 consecutive seasons, and is one of six league franchises with multiple championships.

Seattle’s prowess was enhanced by the presence of Ruidiaz, a Peruvian international and designated player known for his wide-ranging offensive skills. He’s nicknamed “The Flea” for his ability to navigate though tight spaces and score almost at will.

In his two Sounders seasons, Ruidiaz has 21 goals in 36 matches, including 11 over 22 outings in 2019, leading the team in scoring both seasons. He had a goal or an assist in each of the team’s four playoff games.

“I’m thankful and happy,” Ruidiaz said in Spanish in a prepared video from camp. “I apologize I couldn’t be there with you.”

On the softball diamond, Bates led a 52-9 Huskies softball team with a .387 average, and repeated as an All-America selection — one of seven unanimous picks.

The shortstop was in Atlanta with her UW softball team, which opens its season against Ohio on Friday.

“I’m so grateful, it’s such an honor,” Bates said in a video. “I’m so blessed to be at this university that cares so much about people.”

The senior from Ceres, CA, struck out just 16 times in 199 plate appearances, starting all 187 games played during her time with the Huskies. Bates has been placed on the 2020 College Player of the Year watch list.

Longo was stricken by multiple sclerosis a few months before entering UW, but courageously played in two games during the 2019 season. She gave further evidence Seattle is a soccer town.

The Issaquah High School product redshirted as a college freshman before fulfilling her personal goal to play once more. She did it twice.

“The diagnosis wasn’t going to define me,” Longo said. “Every day presents a new set of challenges, but every day allows me to learn and grow and kick MS’s ass. I once promised I would put my cleats back on and that day happened. MS doesn’t stand a chance.” 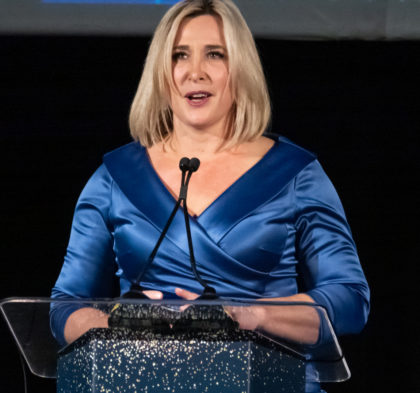 Mentink, a former record-setting UW softball player, has risen through the ranks at the regional sports cable network to become a featured on-air personality for Root and a regional Emmy award-winning broadcast journalist. Again, Seattle is a serious softball town.

The former Angie Marzetta was hailed as a pioneer in launching the UW program in the early 1990s, and played pro baseball for the Colorado Silver Bullets for two years. Two years ago she was diagnosed with breast cancer that she has successfully overcome.

She spoke to her two young sons listening at home, encouraging them to follow their dreams.

“I never did what I was supposed to do,” Mentink said “There’s no fun in that.”

The Schneiders, whose son, Ben,was diagnosed 15 years earlier with autism, were recognized for creating the nonprofit Ben’s Fund to support local families who have children that have been diagnosed with the same illness.

“Tracy and I, with God’s blessing, we got the diagnosis and we strapped it up and, as with everyone who has to go through this, we were going to help them however we can,” John Schneider said in a lengthy, often humorous speech.

O’Brien was a Seattle University All-America basketball player and Pittsburgh Pirates baseball player, both with his deceased twin brother, Eddie. Johnny, a Seattle sporting presence for more than 70 years, was saluted with the lifetime achievement award.

He regaled the gathering with stories about him and his sibling coming to Seattle U from New Jersey, including playing in a showcase 1952 game against the Harlem Globetrotters. His post-athletic career included many years spent as a stadium administrator.

“I’m delighted to have the award but you have to do something positive,” O’Brien quipped. “When I ran the Kingdome, I did such a good job they blew it up.”