If superhero Mike Trout is upset about cheating, MLB has a huge problem. Manfred and the players union must develop new rules to manage technology. Meantime, go Amish. 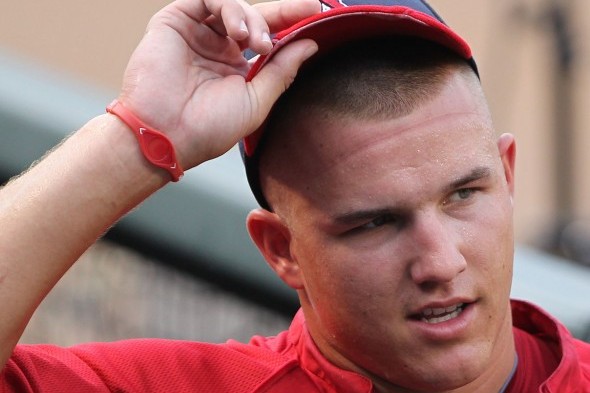 Angels star Mike Trout says he has ” lost some respect” for the cheaters among the Houston Astros. / Wiki Commons

Baseball spring training is probably the most over-wrought annual occurrence on the national sports calendar. In part, that’s because sportswriters traveling from lousy winter climates become deliriously rhapsodic when struck by warm sunshine in Arizona and Florida.

Their work strains to convey significance upon the daily developments, pushing back against the irresistible fact that the mammoth 162-game regular season will render moot nearly all trends or conclusions identified in February and March.

The pointlessness is particularly true for those who follow teams such as the Mariners and perhaps a dozen others that already have opted out of championship contention. Since these teams plan to offer extended spring training for the entire season, they can only hope some media and fans buy into the notion of stockpiling fresh baseball ordnance for contention in unspecified years distant.

But this spring, something highly unusual is happening. Major League Baseball is making serious news by bringing a pox upon itself.

The pox has nothing to do with the more traditional open wounds over gambling, performance-enhancing drugs, or how to share the game’s billions between owners and players.

It has to do with how to play the game the right way, and how baseball deals when it doesn’t happen.

The simplest measure of the depth and breadth of the division over a fundamental principle emerged Monday when Mike Trout felt compelled to say something bad about baseball and some of its players.

I couldn’t have been more shocked if Metallica hired Mariners broadcaster Rick Rizzs as lead vocalist.

At his first spring training interview at Angels camp, baseball’s best player and perhaps most reticent superstar was asked about the controversy over the stealing of signs by the 2017 champion Houston Astros and MLB’s meager punishments.

“It’s sad for baseball,” he said. “It’s tough. They cheated. I don’t agree with the punishments, the players not getting anything. It was a player-driven thing. It sucks, too, because (opponents’) careers have been affected. A lot of people lost jobs. It was tough.

Whoa. Trout usually treats baseball controversy like a barking Doberman. He chooses the opposite sidewalk. Clearly, this one dog he chose not to walk around.

Tellingly, he even worked up some rare humor, however sardonic.

“Me going up to the plate knowing what was coming? ” he said to reporters. “It would be fun up there.”

Even though he drew chuckles, the remark conveyed a sense of awe about how great hitters would alter baseball if MLB doesn’t get a better grip on the impact of technology on its shaky moral compass.

Trout, 28, whose prodigious resume lacks even a single playoff win, may be particularly sensitive to cavalier attitudes toward team success. But he was not alone in his condemnations. As spring training opened, Cody Bellinger, Kris Bryant, Trevor Bauer and Yu Darvish were among numerous star players outspoken about the Astros conduct,  lame apologies and MLB’s wimpy response.

“I don’t know if you take the trophy away or take the rings away, but they should definitely do something,” Trout said. “I don’t know what. To cheat like that, it’s sad to see.”

Doing something is the problem, because Commissioner Rob Manfred not only lacks the stones for the feat, he compounds he angst every time he explains himself. Saturday in an interview with ESPN, Manfred casually dismissed the popular notion of vacating the Astros’ World Series title won in 2017 when the scheme was well underway.

“(MLB’s investigation) gave people a transparent account of what went on,” Manfred said. “We put (fans) in position to make their own judgments about the behavior that went on. That certainly has happened over the last month.

“The idea of an asterisk, or asking for a piece of metal back, seems like a futile act.”

A piece of metal? It’s called the Commissioner’s Trophy, fercripesakes. It the ultimate symbol of baseball success, presumptively won in an honorable manner. Vacating a championship, done in other sports, including the Olympics, for dishonorable behavior, is a gesture that memorializes the misdeeds for future generations. Hardly a futile act.

Manfred hoped the report and subsequent suspensions and fines would put things to rest. Instead, his own words, as well as the weak apologies from Astros owner Jim Crane and players Jose Altuve and Alex Bregman, are making things worse.

MLB was already in a bind regarding punishment of players because it had no labor-law grounds to make it stick. Any suspension would have met with a union grievance, which would stipulate that no advance warning had been given by MLB of the punishment for the commission of the act, which is true. MLB’s warnings about such violations pertained to management only, which is how general manager Jeff Luhnow and manager A.J. Hinch were suspended.

Given the grant of immunity MLB provided to Astros players for their testimony in the investigation, there is no re-do available on the punishments. What’s left are some ugly player vs. player sniping that begets the potential for in-game retaliation via hit batsmen. Already Manfred has had to issue warnings that vigilance would be heightened and punishments dealt for purpose pitches.

Spring training 2020 shall not be boring for anyone.

While looking backward is maddening, there is an idea for this season worthy of consideration that may stifle further paranoia and eruptions until the investigations and recriminations are sorted out.

New York Post columnist Joel Sherman advanced the idea in November when the scandal broke that for the duration of the game, no technology would be available in the dugout or clubhouse. MLB could station hall monitors for each side.

Players can study video before and after the game, and defenses can develop counter-measures. That’s plain ball.

The instant-replay device can be halted, and allow managers to make replay requests with their own eyes, eliminating the wait for the video minions inside.

The one-year change would give MLB and the players union something they have not had so far — time to develop rules that better manage the technology that has changed the game so rapidly.

Every tool that advances knowledge has the potential for abuse (see: social media).  Development of rules to curb the abuse generally trail by years.  The embarrassing pox that baseball has foisted upon itself does not have to linger long if management and the union work together to create a set of rules fair to all in 2021. Meantime, go Amish.

If the stalwart, stoic stud Mike Trout feels compelled to condemn the dirt-baggery, the parties should be sufficiently shamed and incentivized.