The novel coronavirus upon the Seattle area threatens great harm and disruption. A similar influenza outbreak 101 years ago killed about 1,600 and left the Stanley Cup finals in a tie.

The Ice Arena in downtown Seattle, built in 1915, was where the Metropolitans won the 1917 Stanley Cup, but was temporarily closed in 1919 when the Spanish flu pandemic shut down a Cup rematch between the Mets and the Montreal Canadiens. / David Eskenazi Collection

At the moment, quiet apprehension fills the Seattle sports scene. Football is over, and so is Washington’s college basketball’s home seasons. The Mariners are away at spring training. But high school winter sports are building to their annual climaxes. The Sounders opened their MLS season Sunday with a win at the Clink in front of a typical crowd of 40,126.

Cool so far. Yet the phrase is everywhere: Novel coronavirus. The potential for disruption is nigh.

By chance, Seattle is the U.S. epicenter for what public-health scientists fear could become a pandemic.

Nine deaths as of Tuesday evening, and 27 cases of COVID-19, the disease produced by the virus, in King and Snohomish counties. More coming.

No more high-fives in Little League. Costco, ever the exhibitor of the consumer pulse, saw panicky shoppers temporarily wipe out supplies of toilet paper and bottled water, for no logic-based reason. Speaking of ill-logic, because the virus was first detected in China, business in International District restaurants is down by half.

Thursday in soccer-mad Italy, where the outbreak is more serious, a more rational but significant public-health decision was made.

With more than 700 reported cases, officials ordered that a Europa League round-of-32 game in Milan between the home team, Internazionale, and Ludogorets, the visitors from Bulgaria, was too important to cancel. So they played the game in a closed stadium free of spectators.

(Update, noon Wednesday: The government of Italy has banned spectators attendance at all sports events until April 3.)

Is that in store for the Sounders? I don’t know. I’m guessing the Sounders and MLS don’t know. But efforts to slow the spread of previous epidemics and pandemics have almost always included temporary bans on public gatherings, from sports to businesses, schools and churches.

We saw that in Wuhan, a city of 11 million where 16 new hospitals were built to treat the virus originated that originated there. Good news: One of the hospitals was able to close because the infection rate was slowing.

But in the West, the threat grows. Italy set a sports precedent in 2020. So did Seattle, 101 years earlier.

That’s when the city’s public health officials called off the Stanley Cup final between the Seattle Metropolitans and Montreal Canadiens. Civic leaders sought to stem a devastating outbreak of Spanish influenza, which would kill more than 21 million globally, and more than 700,000 in the U.S.

For local hockey fans steeped in the lore of the Mets, the story is a familiar one. But current events dictate for a broader audience a recounting one of the most confounding episodes in Seattle civic and sports history. Below is an excerpt from a Sportspress NW Wayback Machine feature in 2011 by Steve Rudman and Dave Eskenazi.

Medical researchers traced the Spanish influenza outbreak in the U.S. to March 18, 1918, a year before the Metropolitans and Canadiens met for the second time. An unidentified Army private at Fort Riley, KA., reported to the camp hospital complaining of a fever, sore throat and headache. Before the day ended, more than 100 soldiers had taken ill.

From Fort Riley, the flu hop-scotched to Boston, Philadelphia, Chicago and Baltimore, its spread coinciding with massive movements of military personnel, and high concentrations of populations, during World War I (Seattle’s population swelled to 400,000, largely due to military and shipbuilding needs). On Oct. 5, 1918, Seattle Health Commissioner Dr. J. S. McBride stated that influenza is “admittedly prevalent in the city” and blamed its presence on a trainload of sick draftees from Philadelphia that ended up at the University of Washington Naval Training Station. Soon, Seattle health officials recorded 700 flu cases and one death, despite taking rapid action. 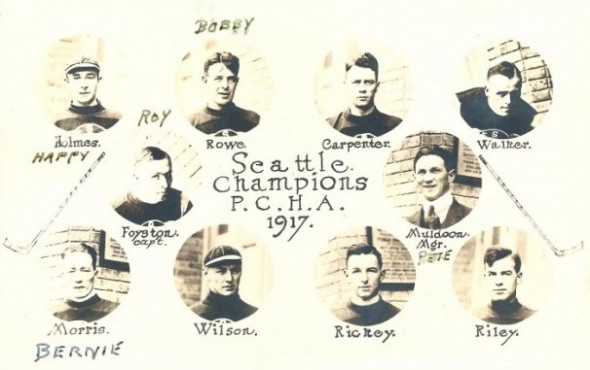 They issued an order on Oct. 29, 1918, making it mandatory that all city residents wear six-ply gauze masks. The state followed with a similar order the next day, covering everyone living outside the King County limits.

To keep the flu in check, authorities forced an end to mass gatherings until the crisis passed, banning dances and theater attendance, closing schools, and curtailing streetcar service. While the city busied itself with major road cleanings and garbage removal, its politicians passed an anti-spitting law.

The city insisted that only close relatives of a deceased could attend his/her funeral, and that no religious services would be permitted for at least two weeks following initial manifestation of the flu. When ministers whined, Mayor Ole Hanson (later famous for founding the city of San Clemente, CA.) remarked, “Religion which won’t keep for two weeks is not worth having.”

Local sports did not go untouched. Because of the manpower drain caused by World War I, plus the added complication of the flu, the University of Washington football team played only two games in 1918, one against Oregon, the other against Oregon State (helping fight the war in Europe, head coach Claude Hunt missed both games).

Because the disease appeared in Seattle six weeks after it first struck eastern U.S. cities, Seattle officials had a chance to plan for its arrival. The  Department of Health and Sanitation, in conjunction with doctors at the Puget Sound Naval Shipyard, developed a vaccine and ordered that all shipyard workers be vaccinated. Of the 10,000 vaccinated, none developed influenza.

But Seattle had more than 10,000 citizens. After Armistice Day on Nov. 11, 1918 marked  the end of World War I, thousands celebrated in Seattle’s streets, sans gauze masks. The city lifted the mask rule the next day and re-opened theaters and other public places. Sure enough, the flu began another rampage before dropping off again. Schools did not re-open until mid-January, 1919.

By March, about 1,600 in Seattle succumbed to the flu. But the city had been relatively fortunate. Seattle suffered a death rate half that of San Francisco and a third of that of Baltimore and Philadelphia.

Oddly, the flu bug never reached Fifth Avenue in downtown Seattle, especially between Seneca and University streets, where the Metropolitans played their entire regular season at the Ice Arena without a reported health-related incident. They finished 11-9, good for second place in the PCHA standings, a game behind the Vancouver Millionaires. They beat the Millionaires in a playoff series to advance to the NHA Finals against Montreal. The best-of-five series wound up 2-2-1, forcing an unplanned Game 6.

Five and a half hours before the Game 6 face-off, players on both teams suddenly took ill with the flu. Health officials quickly dispatched five Montreal players to local hospitals, and ordered the rest of the Canadiens to remain in their rooms at the Georgian Hotel. Jack McDonald became the first Canadien to go down, followed by Newsy Lalonde, Joe Hall, Billy Coutu, Louis Berlinguet and team manager George Kennedy. All had fevers ranging from 101 to 105 degrees.

From his hospital bed, Kennedy announced he would forfeit the Cup to Seattle, but Muldoon refused to accept, recognizing that catastrophic illness had caused the Canadiens to be short of players.

Kennedy asked if he could borrow players from the Victoria Aristocrats of the PCHA, but league president Frank Patrick scotched the idea. Several Victoria players had been ravaged by the flu, and some suspected the Canadiens picked it up from Victoria players when they stopped there for an exhibition game prior to arriving in Seattle.

With Patrick having no other alternative, and Seattle public health officials fearful of a large flu outbreak if 4,000 fans jammed the Ice Arena for Game 6, the contest was called off.

The 1919 Stanley Cup playoffs ended with no champion, marking one of only two times the trophy was not awarded (2004-05 season was wiped out due to a labor dispute). That season is recorded on the Stanley Cup today simply as: ”1919, Montreal Canadiens, Seattle Metropolitans, Series Not Completed.”

On April 5, Hall died at Seattle City Hospital from pneumonia that developed while he battled the flu. Many of his teammates attended his funeral in Vancouver April 8. The other Montreal players eventually recovered, but a weakened Kennedy never did. He suffered from ill health for two years and died at 39 in 1921, most attributing his early demise to the lingering effects of Spanish influenza. Two months later, Kennedy’s widow, unable to meet the team’s financial obligations, sold the Canadiens for $11,000.

When it Mattered Most, The Forgotten Story of America’s First Stanley Cup, by Seattle author Kevin Ticen

How the Horrific 1918 Flu Spread Across America, Smithsonian Magazine