From AA to rookie starter, White is M’s top gem

Despite never having played an MLB game, Evan White has a $24 million contract and locked up the Mariners’ first-base job. The former No. 1 pick plans to stick. 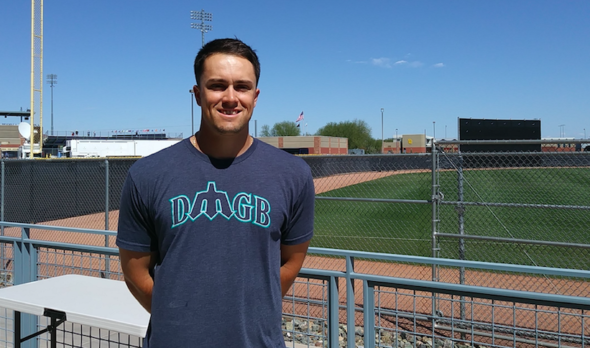 Note: Along with the rest of MLB, Mariners spring training is shut down as sports copes with the novel coronavirus. Before the doors closed Thursday, Jim Caple caught up with rookie Evan White.

Despite White not having played in the majors, the Mariners nonetheless signed him to a six-year, $24 million contract this winter because they think he’s ready to be good now. It was the first time Seattle general manager Jerry Dipoto has signed a player from AA to a large major league deal.

“In theory, it seems like a lot of money,’’ Dipoto said. “For $24 million, it’s way more money than most people will ever make in their lives. But for us, it seems like a reasonable bet to place in a player that we believe in.

“We see him as central to the formation of this roster. He’s the right person. We trust his maturity and his ability to deal with the inevitable ups and downs, the struggles that come for young players. And that’s really the only hump you need to get over when you have his level of talent. We trust the person.’’

“It’s definitely exciting,’’ he said. “Definitely, I believe in the organization, and for them to believe in me as well is special. It’s a dream come true. You work your whole life and your goal is to get to the big leagues so you have to go out there each and every day and work your butt off and earn it.

Dipoto also thinks fans will be happy about this contract, as they were a generation earlier when Ken Griffey Jr., Edgar Martinez and Jay Buhner earned long-term deals.

“In theory, if you do this and pick the right people, then you look up in six or eight or 10 years and your fan base was able to embrace players because they knew they would be there,’’ he said.

White, 24 in late April, grew up in Columbus, OH., where we was a huge Reds fan (he loved Griffey when the former Mariner played for Cincinnati). He started playing first base because he is left-handed. He went to college at the University of Kentucky, where he batted .318, .376 and .373 in his three seasons there. The Mariners picked him in the first round, 17th overall, of the 2017 draft.

White says that veteran infielders Kyle Seager and Dee Gordon have been helpful. He also hit .364 during spring training. The hope is that whenever the season starts, he can approach the numbers he had in AA. In 365 at-bats, he was .293/.350/.488 with 18 homers and 55 RBI, with 92 strikeouts and 29 walks.

“Since day one, he’s been really consistent,’’ Servais said. “We all know defensively he’s really gifted. Soft hands and picks balls up from the dirt. With the bat, his swing has been good. Balls in certain parts of the strike zone he handles better than other parts. He’s got some adjustability to his swing, so I think he’s going to be just fine.

“How many home runs he’ll hit, I have no idea. But as long as he continues to have good swing decisions, he’ll be just fine.’’

White understands this is a developmental year for the Mariners as well as him.

“I think as a team, no matter the situation, we’re going to go out there and try our hardest and win as many games as possible,’’ White said. “The biggest goal this year is to continue to learn and continue to do my routine. Try to break down pitches at the big league level.’’

White knows the leap from AA to an MLB starting job right out of spring training is a rare feat, but he has bigger plans.

“I want to get there and stay there,” he said. “It’s something you’re working your entire life for. It’s a crazy thing how things have changed in a year.”