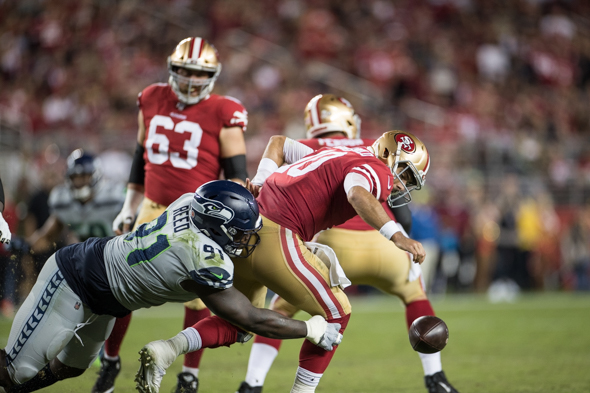 Jarran Reed had a bad 2019. But 2020 is, financially anyway, looking a lot better. The Seahawks kept their defensive tackle off the free agent market by coming to terms on a two-year, $23 million contract extension, the NFL Network reported.

Tempering the news for Seahawks fans was the loss to the New York Jets of RT/TE George Fant, the former Western Kentucky basketball star they transformed into a serviceable offensive lineman who frequently served as a tight end in the jumbo package that helped make the Seahawks’ rushing game among the NFL’s best.

Late Monday night, TE Luke Willson posted via Twitter that he had re-signed with the Seahawks. A popular character in the locker room, Willson played in eight games and had eight catches for 79 yards after re-joining the club Sept. 25 following his release by Detroit. He gives the Seahawks a fourth tight end behind Will Dissly, Greg Olsen and Jacob Hollister, the latter given a tender Monday as a restricted free agent.

Fant earned a whopping raise of up to $30 million over three years, with $13.7 million guaranteed, according to ESPN.com. He made $3.1 million last year.

The pending Monday night deals enlivened the first day of “legal tampering” ahead of the official start of the NFL’s business year Wednesday, when contracts can be signed.

Reed in 2018 had one of the best seasons for a Seahawks interior lineman, with 10.5 sacks playing alongside since-traded DE Frank Clark. The only other Seahawks tackles with 10 or more sacks in a season were Hall of Famers Cortez Kennedy and John Randle.

But in 2019, he missed the first six games for violating the NFL’s domestic abuse policy, although charges for the incident in his home were not brought by Bellevue’s city prosecutor’s office. Reed apologized for the incident, but said he disagreed with the suspension.

Upon his return, he wasn’t the same guy, registering two sacks as the Seahawks’ pass rush dwindled to one of the league’s worst.

Reed was not fully responsible for that. So the Seahawks, according to the Houston Chronicle, gave Reed $14.1 million guaranteed. including a $10 million signing bonus, with base salaries of $4.1 million in 2020 (guaranteed) and $8.075 million in 2021.

Coach Pete Carroll obviously did not lose faith, indicating in his post-season press conference that Reed 2018 production was not a freak event.

“No, I’m not going that way — I’m not going that way, at all,” Carroll said in January. “When you go back and watch his film, and watch all the attempts at making sacks and the opportunities that were there, right in front of him . . .  he had probably five or six plays were he could have made a clean sack, and it got away from him for one reason or another. That changes everything.

“We’d love to have him back with us, with the expectation that (his 2018) year is within his reach.”

A second-round pick out of Alabama, Reed tweeted earlier in the off-season that he thought a deal of $10 million a season wouldn’t be enough to keep him. That proved true, but the Seahawks reduced their risk by limiting the deal to two seasons. Reed will be eligible to return to free agency in his age-29 year.

The Seahawks would have liked to have kept Fant, 27, too. A powerful, agile 322-pounder, the undrafted free agent played in 46 games (he missed 2017 with knee surgery), starting 23, and even caught a nine-yard pass from his familiar tackle-eligible position. He started two games in place of injured Duane Brown at left tackle early last season.

Fant made it clear he wanted a shot to be a starting left tackle, something that wasn’t going to happen in Seattle as long as Brown, 35 in August, was healthy. As a rookie in 2016, Fant started 10 games at left tackle because of injuries.

Fant likely would have drawn consideration to play right tackle if four-year starter Germain Ifedi, also an unrestricted free agent, leaves Seattle. If Ifedi goes, Jamarco Jones, who started four games at guard and tackle last season, would be the likeliest in-house to be promoted.