Richard Sherman hooked up Tom Brady in a memorable meme from 2012. Their careers also had a parallel track: They wore out their legendary coaches. 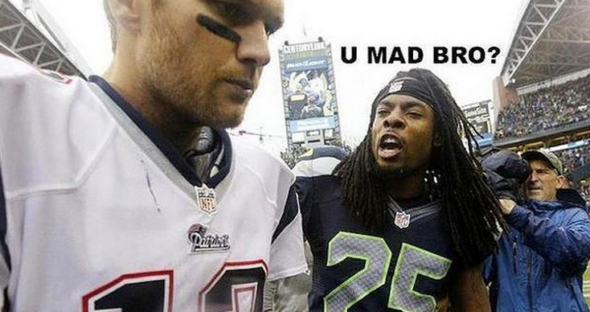 in 2012, Richard Sherman doctored up and tweeted out a photo of two guys who figured they were bigger than their franchises. / Associated Press via Sherman Twitter account

That was Richard Sherman’s semi-immortal post-game query to Tom Brady after the Seahawks beat the Patriots, 24-23, at the Clink in 2012, a game that created national notice that the team from South Alaska might have a little something going on.

Never mind that Sherman, who intercepted a Brady pass, thought of the question later, after he saw the post-game photo of the pair, then posted the paste-on quote to his Twitter account. Legends often transcend facts.

Nearly eight years later, the meme takes on a fresh glint as new light enters the prism. Although some circumstances are different, Brady left the Patriots in large measure for the same reasons Sherman left the Seahawks.

They wore out the boss. The boss wore them out.

While a season-ending injury gave the Seahawks some cover to jettison Sherman after his contract year, it was plain before the 2017 season that he was sideways with coach Pete Carroll and and general manager John Schneider.

How pissed were the bosses with his high-profile insubordination? At the scouting combine, they openly admitted taking trade offers for Sherman. They never go public with something like that. Apparently, the threat to toss Sherman into some NFL ashcan was enough to bring their star provocateur to heel for half a season.

In New England, once Brady a year ago didn’t get a contract extension, he went into the 2019 season a dead man walking. The QB and his coach, Bill Belichick, always had nearly as much tension as success. Once the season played out with a first-round playoff exit and Brady looking his 42 years, the merciless Belichick was done, and Brady was done with him.

With Belichick, the historic achievements over their 20 years together meant little. It’s why the joke about Belichick’s numbing post-game rhetoric, “We’re on to Cincinnati,” reveals some truth. The laser focus that makes him so great as a coach also makes him an intolerable asshole.

So even though Brady’s Wednesday morning farewell on social media was a shocker to fans, it wasn’t really a surprise. All the reporting out of Boston said that owner Robert Kraft left the decision to Belichick, who responded to Brady with the vivaciousness of a dial tone.

Although none of the parties in Seattle or Boston likely will own up to the real conflicts among egos at the sports pinnacle, they are often the facts of sports life, as well as in the executive suites of many businesses. The combined pressures of spotlights, media, money and adoration are crushers.

The real surprise is that the ferociously competitive tandem lasted 20 years. Of all their feats together, survival is the most remarkable.

The immutable factor in the sports relationship is, of course, age.

Particularly with quarterbacks, acknowledgement of increasing vulnerability is anathema for the great ones. From Johnny Unitas to Joe Namath to Joe Montana to Brett Favre to Peyton Manning, the relationship with the team brought to glory inevitably crumbles, and the aging hero moves on to find another village to save from dragons.

Relationships get exhausted even more quickly among coaches and managers. Here in Seattle, the best manager in Mariners history, Lou Piniella, wore out his bosses. He was traded to Tampa because he wore out CEO Howard Lincoln, who wore out Piniella. So too for the best coach in Sonics history, George Karl, whose drama with president Wally Walker somehow hasn’t turned into a documentary on TMZ.

Speaking of Tampa, the unexpected twist in the Brady story is that he is going to a moribund franchise, the Tampa Bay Buccaneers, that hasn’t been to the playoffs since 2007 and was 7-9 last year behind Jameis Winston’s 33 touchdown passes and 30 interceptions (he’s now a free agent). The brothers of the Seahawks in the NFL’s 1976  expansion, the Bucs have a lifetime .387 win percentage — worst among the four major North American sports leagues.

What Brady discovered was there’s not a big market for 43-year-old temps, even the GOAT.  Especially after it was learned that he wanted to stay on the East Coast to remain nearer his son, John, 12, who lives in New York with his mother, Bridget Moynahan, the candidate teams dwindled.

So he and the Bucs are expected to announce sometime Wednesday that Brady will join “quarterback whisperer” coach Bruce Arians, who has worked with Ben Roehlisberger, Andrew Luck, Carson Palmer and Winston. As affable as Belichick is taciturn, Arians couldn’t be a more different coach than the only one Brady has known in the NFL.

Brady figures to be thrilled. The hope is that he has more in the tank than Franco Harris, Jerry Rice and Patrick Ewing had in their last stops in Seattle.

As great coaches from Red Auerbach to Al Davis to Phil Jackson to Joe Maddon have said about themselves regarding making demands on the same star for a long time, the voice wears thin. To which Carroll and Belichick would say, amen.