An influential governing body, USA Swimming, has asked the USOPC to lobby the IOC to postpone for a year the Tokyo Olympics. Against Covid-19, here is no option. 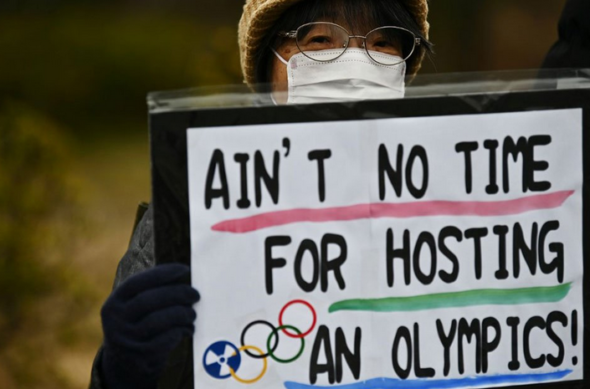 Finally, some people in the Olympics community did the right thing.

USA Swimming, one the most influential governing bodies in the the Olympic world, wrote a letter Friday to the the U.S. Olympic and Paralympic Committee calling for the Summer Games, booked to start July 24 in Tokyo, to be postponed until 2021.

As reported first by USA Today, CEO Tim Hinchey wrote that the disruptions caused by the COVID-19 pandemic caused “our athletes’ worlds to be turned upside down, and watched them struggle to find ways to continue to prepare and train – many for the biggest competitive opportunity of their lives.”

In the U.S., federal, state and local restrictions since the outbreak have caused nearly all major sports leagues, events and tour to be shut down. Gatherings of more than 10, which includes all the Olympics training centers, are broadly prohibited. China and numerous European countries have adopted similar policies.

Since the global threat became clear in February, the International Olympic Committee refused to consider a change, hoping that the cushion of the mid-summer start might allow the spread of infection to dwindle before the Games.

But for elite athletes, regimens already have been compromised, and competitions canceled.

Wrote Hinchey: “Everyone has experienced unimaginable disruptions, mere months before the Olympic Games, which calls into question the authenticity of a level playing field for all. Our athletes are under tremendous pressure, stress and anxiety, and their mental health and wellness should be among the highest priorities.

“It is with the burden of these serious concerns that we respectfully request that the U.S. Olympic & Paralympic Committee advocate for the postponement of the Olympic Games Tokyo 2020 by one year. There are no perfect answers, and this will not be easy; however, it is a solution that provides a concrete path forward and allows all athletes to prepare for a safe and successful Olympic Games in 2021.

“We urge the USOPC, as a leader within the Olympic Movement, to use its voice and speak up for the athletes.”

Already, Olympic qualifiers and dozens of sports events across Asia have been postponed or called off, including the indoor world track and field championships in Nanjing, China. Abandonment of qualifying events wreaks havoc with athletes waiting to advance, organizers and federations are forced to find new venues — not to mention disrupting travel.

Japan was anticipating an influx of more than 90 million tourists in 2020, many coming for the Games. The IOC gets more than 75 percent of its $5.7 billion quadrennial budget from international broadcast rights, mostly from NBC. So the cost of postponement is enormous.

But as of midweek, Japan has had more than 27 deaths and 857 confirmed cases of Covid-19. A nationwide poll reported that 70 percent of respondents opposed starting the Games on time.

USOPC CEO Sarah Hirshland and USOPC chair Susanne Lyons responded to Hinchey’s letter in a statement, saying it is too soon to make a final decision.

“The USOPC is in constant communication with senior leadership of the IOC and IPC — and they have also expressed that their focus is on the health and well-being of athletes, and communities around the world, and that they will continue to rely on advice from the World Health Organization as they determine if it is necessary to adapt their position as the situation evolves,” Hirshland and Lyons wrote. “They believe that it is premature to make a final call on the date of the Games and we believe that we should afford them the opportunity to gather more data and expert advice before insisting that a decision be made.”

They claimed to have the athletes’ best interests in mind.

“Rest assured we are making your concerns clearly known to them,” they wrote. “The USOPC will be leaders in providing accurate advice and honest feedback, and be unfailing advocates of the athletes and their safety, and the necessity of a fair platform for the Games. You have our promise.”

Having covered nine Olympics, I have developed an involuntary, reflexive arch in one and sometimes both eyebrows when I hear any U.S. or IOC executive use the phrase, “athletes’ best interests.” Typically, the athletes’ best interests is never more than a bronze, always behind the sponsors’ gold and NBC’s silver.

But having an entity as influential as USA Swimming go public with its recommendation to postpone is a big step in the right direction. Difficult as the change may be, at least the Olympic athletes presumably will get a chance to compete at the highest level in 2021, an outcome denied to senior college athletes in the NCAA’s winter and spring sports.

ESPN reported that in an Instagram post Thursday night, Jacob Pebley, a swimmer on the 2016 Olympic team, wrote that participating as scheduled would defy the new normal being imposed by public health officials locally and nationally.

“How can we, members of Team USA and role models for hundreds of thousands of young athletes, attend Olympic Trials/the Olympics in good conscience?” Pebley wrote. “To do so would fly in the face of all emerging evidence and best practices for social distancing and protecting the health of vulnerable communities.”

Mathematical modeling of viral spread are often debatable, but there’s little doubt this spring that casualties in his pandemic are not close to peaking nationally or internationally. The sooner the IOC accepts the reality and joins in being part of the solution, the quicker athletes can re-calibrate for 2021.

Unless “the athletes’ best interests” barely make the podium again.