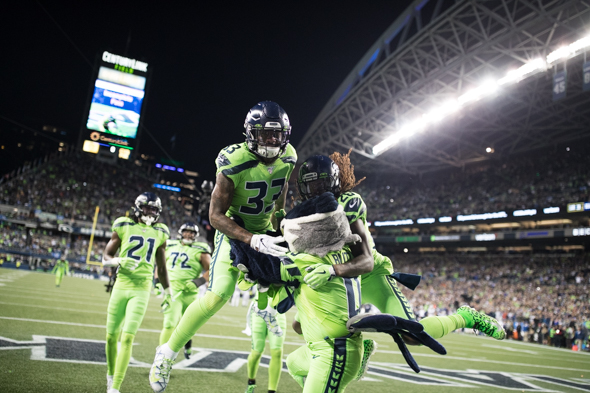 FS Tedric Thompson, along with Shaquill Griffin, celebrate with mascot Blitz an interception against the Rams in a 30-29 win at the Clink Oct. 3. / Drew McKenzie, Sportspress Northwest

The Seahawks did some anticipated housekeeping Tuesday, perhaps a signal of a breakthrough in the pursuit of DE Jadeveon Clowney — or to welcome his successor in the Seahawks’ desperate attempt to fix a passive pass rush.

The NFL also did some anticipated housekeeping Tuesday: As the traditional beacon for the “more is better” school of sports economics, owners officially voted to expand playoffs for the 2020 post-season — presuming there is one — that adds two more teams, one per conference, and reduces by one the number of first-round byes.

First the Seahawks: They saved a combined $5.1 million against the salary cap by waiving TE Ed Dickson ($3 million) and FS Tedric Thompson ($2.13 million), the club announced.

Overthecap.com calculated that the Seahawks began the day with about $11.3 million left under the cap, not counting the acquisitions of free agents WR Phillip Dorsett and DE Bruce Irvin. Dorsett’s one-year cost against the cap is modest, according to ESPN’s Field Yates Tuesday: $877,500, while Irvin’s one-year deal has yet to be reported.

So the clearing of accounting entries make it stand to reason that something is happening, but imminence was unknown Tuesday afternoon.

Neither was Thompson, 25, once the Seahawks allowed him to seek a trade a few weeks ago following labrum surgery on his shoulder. He was put on the injured reserve list Oct. 30 after it  became clear Thompson was over-matched as a starting free safety. The Seahawks traded for Quandre Diggs Oct. 23 to solve the problem.

A fourth-round pick in 2017 out of Colorado, Thompson had a lot of pressure to succeed Earl Thomas, but managed only 16 career starts in 29 games.

At the league level, the new 14-team playoff format, approved via teleconference based on a new collective bargaining agreement barely agreed to by the players March 15, works this way:

Three-quarters of the owners had to approve, but it’s unlikely there was a single nay because the extra playoff game, plus the pursuit for the new berths that could involve half the league, enhances the industry’s value to networks and streaming services in future contracts.

The standard complaint upon expanding a playoff format is that it dilutes the quality of the field. But the NFL had a ready answer.

According to NFL.com, since 1990, when the playoffs expanded from 10 to 12 teams, 44 of the 60 teams that would have claimed the seventh seeds had winning records, including 10 different 10-win teams. Only the 1990 Dallas Cowboys would have made the playoffs with a losing record over that span in a 14-team format.

One of the fan bases least likely to complain about dilution would be Seattle’s, mainly because in the first year of the Pete Carroll/John Schneider regime in 2010, the Seahawks’ 7-9 record was good enough to win the NFC Worst and host the defending Super Bowl champions in the first round.

Since the 41-36 upset triumph included the immortal BeastQuake by Marshawn Lynch, it is likely that silence over the change shall stand astride over Puget Sound.