A survey of NCAA athletics directors says they fear losing up to 20 percent of revenues because of COVID-19. How about using this downtime to re-think the enterprise? 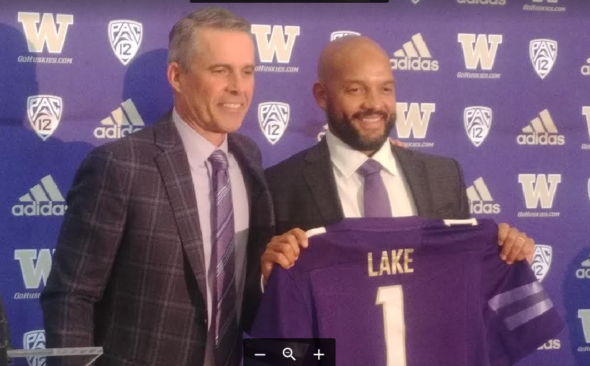 Boy, did Chris Petersen know when to fold ’em, or what? / Art Thiel, Sporspress Northwest

Only 42, new University of Washington football coach Jimmy Lake doesn’t have a lot of room to talk about “back in the old days.”

Nevertheless, during an update teleconference call this week with area reporters, he did. And said something perhaps unintentionally prophetic.

“I think back to the old days when football wasn’t 12 months a year,” he said. “People used to show up to training camp and you used to get in shape in the first two weeks, and then the next two weeks you were kind of getting dialed in on the scheme, and then the season began. That’s how it used to be.”

That’s likely how it shall be again, at least this season, in pro as well as college football.  And done once, at considerable savings in expenses, why not do it again, and year after year?

Surrounding the tragedy of the COVID-19 pandemic is the immense impact of the economic shutdown. Few industries will escape major consequences, none with a higher public profile than the sports-industrial complex.

As we await solemnly the achievement of the peak of the graph that is suddenly ubiquitous in our lives, a glimpse of the post-virus financial future for college sports was published Thursday via The Associated Press.

A survey of more than 100 FBS athletics directors, done by LEAD1 and Teamworks, a company that created an app to keep teams and athletics directors connected, revealed that 63 percent of ADs agreed that a worst-case scenario is likely in which their revenues would decrease by up to 20 percent in the 2020-21 school year.

To a Seattle restaurant owner who has already seen a 100 percent cut in revenues, a 20 percent drop is a screamin’ deal. But to members of an increasingly desperate, creaky association whose vast majority has been operating in the red for years, the 20 percent forecast should be cause for alarm, maybe panic.

At most big schools, football revenues and the men’s basketball tournament cover nearly all the annual expenses for every non-revenue sport, including most coaching salaries. But a national public health crisis forced the NCAA March 12 to shut down all winter and spring sports so abruptly that one men’s hoops game was stopped at halftime.

The survey didn’t ask about how the shortfall might be managed, but it’s reasonable to anticipate entire sports being eliminated, services cut and salaries reduced. Iowa State is already cutting coaching pay to make up for the absence of hoops tourney money.

Much can change regarding the pandemic between now and late August that could forestall the worst-case financial scenario in college sports of canceled football games. But even if the federal government regains its wits to help mitigate the most catastrophic outcomes of COVID-19, the NCAA and all its competing constituencies are unlikely to respond coherently when the re-start is signaled.

Nevertheless, amid the darkness, there is a flicker. It’s possible to see an outcome, albeit very messy, that offers long-term hope: A collapse of the NCAA arms race.

Underway for years, the arms race among football and men’s basketball schools has separated the haves (about 10 percent) from the have-nots, creating several professional leagues with world-class salaries, world-class facilities, world-class debt and no hope of sport-wide balance, financial sustainability or meaningful self-regulation.

The NCAA, a trade association lacking the basic rules of corporate governance but with a mandate to preserve an archaic economic concept, amateurism, which has no place in a capitalist society, cannot help itself.  It is a wafer-thin mint away from becoming late-stage Mr. Creosote.

The pandemic was a black-swan event for many individuals and businesses. But with problems come opportunities. Serious-minded people around college sports should look at this down time as a chance to re-imagine the entire enterprise.

I have, and have made, a thousand suggestions over many years. But I’d like to take the moment to offer a single absurdity and use it as a question worthy of pursuit of a solution:

Since a football coach or a men’s basketball coach is the highest-paid public employee in 39 of the 50 states, how do we reform the industry to restore balance and a sliver of integrity?

College sports poohbahs will say they’ve heard these lamentations before. But they’ve never had the FBI arrest hoops coaches on corruption charges. They’ve never had a state legislature create a law specifically to allow NCAA players to receive income. They’ve never before been dead-stopped for a national crisis that threatens to devastate their people and their money.

The ask for a re-imagining follows a basic premise of sports: Get ahead, not behind.