No live games? DJ’s SportsCards is portal to past

Bored without live sports? Want to re-capture some childhood imagery? DJ’s SportsCards in Renton is having a little boom in business, created by the shutdown. 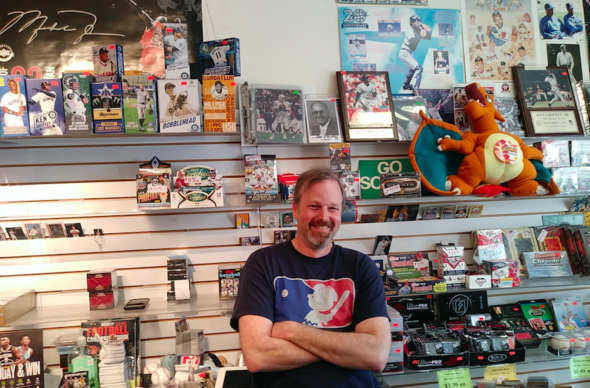 Don Joss has plenty of inventory in his store to fill some voids for sports fans. / Jim Caple, Sportspres Northwest

Due to COVID-19, there’s no Mariners games. Or Sounders games. Or NBA games. Or the NHL or Final Four. If you’re sad that you can’t see any big-time sports this month (and maybe not for awhile) you can still enjoy sports  — a step removed — at DJ’s SportsCards, 1630 Duvall Ave. NE in Renton.

Founded and owned by Don Joss, DJ’s is open, though you can’t go inside because of state restrictions on non-essential businesses. Customers can make purchases online at DJsSportsCards.com or mail order. Phone: (425) 235.4357.

“With the current news, and games being cancelled and nothing to watch, it’s almost like it hasn’t had any effect on the card market,’’ Joss said. “I’m not sure it’s because people need something to do, or whether this is how they can live out sports.

“But it’s almost like nothing has affected the sports-card market. A lot of card prices have gone up. It’s almost been immune, and maybe helped, by the fact there is nothing to watch.’’

Joss has inventory to meet demand.

“In the current situation, customers call, or I’m constantly posting things on my website, my social media – ‘here’s what’s new,’’’ Joss said. “I moved a lot of stuff in the window so people can walk up and order from there, point to things or call me.’’

When he was young, Joss collected comics, then began getting into sports cards in the 1980s.

“I enjoyed following the Mariners every year,’’ Joss said. “In 1985, I really got into them. The previous year they had Alvin Davis and Mark Langston — two of my all-time favorites to this day — and I just thought I would go full-bore on the cards.”

He started selling cards in 1988, working with the owner of another shop, then opened up his current store in 1990 when he was 19. Among his customers was two-time MLB Cy Young winner Tim Lincecum, when he was a Liberty High School star. Other players have signed autographs in the store as well.

The inventory is amazing — baseball, football, basketball and hockey cards, including some that are autographed and some that are decades old. There’s bobbleheads, bats, autographed baseballs, basketballs and footballs, jerseys (one signed by Ken Griffey Jr.) and magazines.

There are even Pokemon cards and Lego sets, and he’s also sold Barbie dolls. The walls are decorated with posters of Griffey, Davis, Jim Zorn, Joe Montana and others.

“The posters are such a kick,’’ Joss said. “That’s another real collectible thing now. Most posters get destroyed and are hard to store. When people see a poster they had in their room 30 years ago, they’re like, ‘I gotta have that.’ ’’

Outside the store, there’s a wood statue of Griffey, done by the grandfather of his wife, Amy.

“When we were a young couple, Amy couldn’t get pregnant,’’ he told me in January. “So we looked into adopting. And we found a program where it was foster care, but it was designed to get you a child that would probably become adoptable. The idea was, you would be a foster parent, but you would keep them if they become available, instead of them bouncing from foster home to foster home.”

“Even after having bio kids, we still felt the desire to give a home to kids who did not have one,’’ Amy said. “So we just continued onward, wherever God led us.’’

The oldest of the adopted, Rebecca, is 22. Son Daniel was born 18 months later. They adopted Glory from Texas in 2017. “We adopted twin boys, Juan and Rudy, from Guatemala who were only two months younger than James (one of their sons) in 2004 — so we had virtual triplets, all a year old,” Amy said.

Several of the kids are into sports and also help in the store.

“They play pickup basketball, baseball, football in the yard almost daily,’’ Amy said. “Five of the boys work at the shop regularly. James in particular has a real gift for working with cards.’’

Somehow Joss finds a way to keep working the business during these times, with hours from 11 a.m. to 7 p.m.

“There is always stuff coming in,’’ Joss said. “I’m still planning to expand my store. I need more room for merchandise.

When he started the business, the sports-card market was huge, then crashed in later years. They are booming again.

“Like it was 30 years ago,’’ he said. “Anybody that was young during that boom 30 years ago, they’re older now. They’re getting back into it, they have more money. The cards are prettier, they have autographs on them.

“Then you’ve got the new generation coming in, and cards have just been skyrocketing the last couple years.’’

Since you can’t experience sports live these days, Joss offers a wonderful portal to the past.