Thiel: ‘Bubble Ball’ is a nice try, MLB, but nah

MLB is floating an idea about playing, starting in May, all in Arizona, to out-smart the coronavirus. But so much can go so wrong, and MLB isn’t Navy SEAL Team 6. 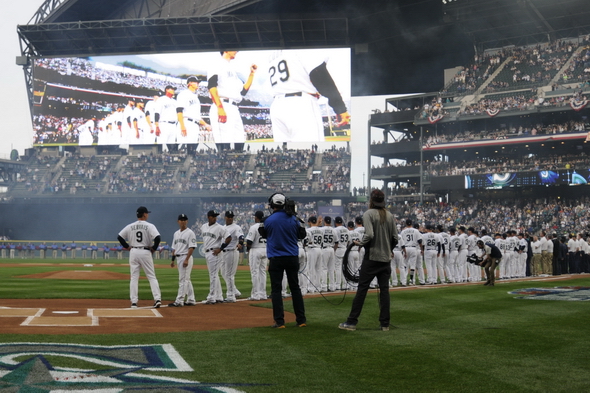 This is how MLB Opening Day is supposed to look. Let us not fall into temptation. / Alan Chitlik, Sportspress Northwest

Mocking the stewardship of major league baseball is one of the game’s great traditions, as fulfilling as dribbling tobacco juice down a chin, or second-guessing a manager’s choice of reliever after the ball winds up in the right-field seats.

But this week, it’s time to break from tradition. I have to admire the brain trust of MLB for conjuring up Bubble Ball.

It’s not going to work. But like any attempt by Rick Rizzs to sing the blues, I have to admire the guts.

Bubble Ball is what I call the idea of trying to play, starting in May, most of the 2020 season in the greater Phoenix area without fans and in isolation. Baseball seems to think it can out-smart the coronavirus by testing everybody all the time and expecting the players to keep from swapping spittle and sweat when they collide under foul-pop flies.

Offered up Tuesday night on background to ESPN baseball writer Jeff Passan, then all but officially dismissed the next morning by MLB, commissioner Rob MacGyver — uh, Manfred — is testing public sentiment about the outrageous scheme, without having to stand in front of a camera while trying to keep a straight face.

Manfred and the owners are understandably desperate to save as much of the season as possible, and players are equally eager for paychecks. Both sides and the TV networks see a chance to exploit a huge market advantage by being the main live sport after the shutdown dwindles or ends. It won’t be as easy to re-start the indoor seasons of the NBA and NHL.

So they have concocted the notion of playing a season in 10 spring-training stadiums as well as Chase Field, home of the Diamondbacks. They would deploy numerous  double-headers of seven-inning games and rosters of 40 or more players, all of whom would be sequestered in area hotels, probably absent their families, and shuttled daily across the Valley of the Sun to ballparks in disinfected buses.

They would play in empty stadiums — except for umpires, grounds crew, security, food-service, custodial, non-uniformed team members and MLB staff and telecast personnel, presumably all of whom would have to be at least screened for fever and perhaps tested for symptoms. Instead of the dugout, players would sit apart in the stands. Managers and coaches could not visit to the mound, and balls and strikes would be called by robots.

Part of MLB’s tut-tut statement Wednesday made the obvious reference to safety first:

The health and safety of our employees, players, fans and the public at large are paramount, and we are not ready at this time to endorse any particular format for staging games in light of the rapidly changing public health situation caused by the coronavirus.

As of Wednesday, Arizona had a relatively mild infection rate, reporting 80 deaths and 2,726 confirmed cases of coronavirus. That could be good news, or it could mean that a spike is yet to come. Even though the nationwide curve is beginning to flatten, data shows spontaneous eruptions of hot spots throughout the country.

Viral spontaneity is, of course, the existential threat for Bubble Ball: The coronavirus is nowhere, and everywhere, at once, and since it is novel, there is no known pattern, no known antidote. Nor is there data that shows it is vulnerable to warmer weather.

What is far more predictable is the behavior of men who are young, rich, bored and popular. No need to have an epidemiologist tell us that sequestering that many for 4½ months is the most unlikely aspect of this embryonic idea to succeed. In second place is assuring that all non-playing personnel on-site are virus-free. All it takes is one substitute bus driver, or one hotel-restaurant waitress back from a visit with grandma.

Then there is the matter of drawing away to this private-entertainment enterprise all the medical personnel and equipment from hospitals. Maybe MLB can pay a private firm to test a hundred or so club personnel on 30 teams on a regular (daily?) basis, but it will not be a good look if Maricopa County hospitals overflow with COVID-19 victims.

Then there’s the small matter of playing day after day in Phoenix’s June/July/August average daytime temperature of 105 degrees. Probably only three games a day can be scheduled in air-conditioned Chase Field. It makes it seem as if owners want to do in players one way or another.

Yet if this circus were to come off, odd as it sounds, the Mariners are among the teams that might benefit. Unlike teams loaded with stars and big contracts, the Mariners were booked to be non-competitive for a second year in a row. The chance to test all the premium youngsters on a 40-man roster might give them a quicker, better understanding of the future, and attendance wouldn’t degrade any more than anywhere else.

But that is hardly enough lipstick for this pig.

The news of the past couple of days is somewhat encouraging regarding the flattening of the national curve. But it’s no guarantee of any direction, particularly if large numbers of people slack off the new rules of hand-washing and social distancing.

Nor is anything known about what a re-start of non-essential businesses would look like, particularly since pandemics are notorious for having second and even third waves.

So many things would have to go so right for so long for this thing to work, and nothing about MLB reminds me of Navy SEAL Team 6. Remember, this is an outfit that didn’t know its best team was cheating its ass off until someone inquired about noisy trash cans.

So as much praise as I offer Manfred for good ol’ American spunkiness, I’d like to see him leak to ESPN a plan for something like a July 1 re-start in the home parks. I’m good with a three-month season. I’d take one month, if I were reasonably sure I could shake hands at the ballpark without dooming us both.