What Seattle is going through now has been done here before. The lesson from the 1918-1919 Spanish Flu pandemic is that there is no quitting early on a fight with a virus. 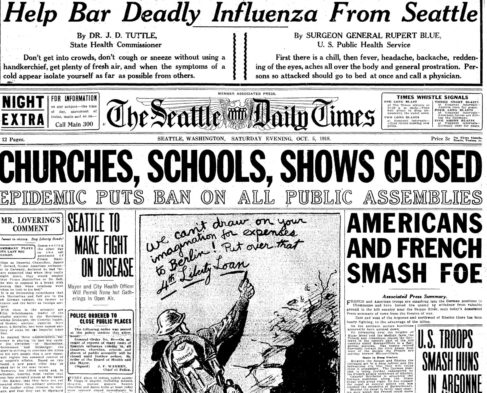 The front page of the Seattle Times on Oct. 4, 1918, warning about the Spanish influenza pandemic near the end of World War I.

Turn on any TV and you’ll quickly hear about these “unprecedented times” and this “unprecedented pandemic.” What we are experiencing is hardly without precedent. In our lifetimes, sure. But global pandemics have long ravaged the world. One need only look back a century to see a pandemic’s affect on a sophisticated urban society.

While that pandemic was devastating – infecting one-third of the world’s population and killing an estimated 50 million – we learned significantly from that experience; some of it positive, including life post-coronavirus.

Every big city’s history is dotted with sports championship near-misses. Great teams that came up just short of winning their sport’s ultimate prize.

Sometimes it’s lack of experience (see the 1978 Sonics and ’95/’97 Mariners), sometimes the other side simply makes a play (2015 Seahawks). Sometimes, it’s a historically great opponent (2017 Sounders and 1996 Sonics). And one time, a pandemic strikes on the day of the championship series’ deciding game.

Thankfully, we have the Storm, who are 3-0 in WNBA Finals.

We certainly aren’t the only city to lose a championship to experience or opponent. But until now, we were the first to be denied a championship because of a pandemic.

The 1919 Seattle Metropolitans pro hockey club was closing in on its second Stanley Cup in three seasons when the Spanish Flu, a novel H1N1 virus, made a tragic return to Seattle.

This time it hospitalized five players from the visiting Montreal Canadiens on the morning of the decisive Game 6 (the best-of-five series was tied 2-2-1 when Game 5 was stopped after two overtimes). 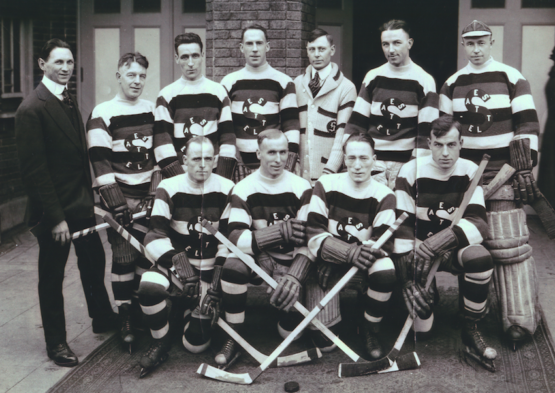 The 1919 Seattle Metropolitans were denied a Stanley Cup by the Spanish Flu. / David Eskenazi Collection

Without enough men to play, the Canadiens that afternoon initially sought to forfeit the Cup, then subsequently offered to use amateur players. Both sportsmanship gestures were quickly declined by the equally honorable Metropolitans. Hours later, the health department canceled the final game to mitigate the Spanish Flu’s third wave to strike Seattle and Washington state. Forever on the Cup, the series is labeled “incomplete.”

That the Metropolitans were denied a second Stanley Cup due to the pandemic is significant in sports history. That it was the virus’s third and final Seattle swing is perhaps most relevant today. While we all yearn for the return of sports, from amateur through professional, it’s important to understand the course run by last century’s worst pandemic.

Globally, the Spanish Flu hit in three waves, first appearing in the U.S. in March 1918 when soldiers fell ill at Fort Riley, Kansas. It quickly spread before going almost dormant over the summer months.

The second wave began that September and was the most widespread, deadly and economically disruptive. Soldiers traveling to and from Europe’s battlefields in World War I spread the disease globally. Almost immediately, a third wave in the winter of 1918-19 was spawned by the war’s end, when social restrictions eased and large parades welcomed soldiers home.

In 1918, American cities first began mitigation strategies to flatten the curve in the fall. At noon on Oct. 5, political leaders shut down Seattle.

“Churches, Schools, Shows Closed: Epidemic Puts Ban on All Public Assemblies,” read that afternoon’s Seattle Daily Times. At the time, only 100 to 200 cases were reported in Seattle. Opposition was immediate. Seattle Public Schools superintendent Frank B. Cooper called the measure “hysterical” and a “senseless thing to do.”

In 1918, the disruption to sports was minimal. Babe Ruth already had led the Red Sox over the Chicago Cubs in the World Series, college football was canceled due to the war and the hockey season wouldn’t begin until the first week of December. In fact, the biggest sports event postponed by the pandemic was the Jack Dempsey vs. Battling Levinsky heavyweight boxing match Oct. 9 in Philadelphia.

A little over a month after the city’s shutdown, Seattleites got a double dose of delight Nov. 11. The Times headline in all caps proclaimed, “ARMISTICE TERMS NAMED!” Underneath the lead story headlined, “Seattle In Ecstasy Of Joy At Ending Of World’s Worst War” was the other big story: “Ban Will Be Lifted Here Tomorrow.” 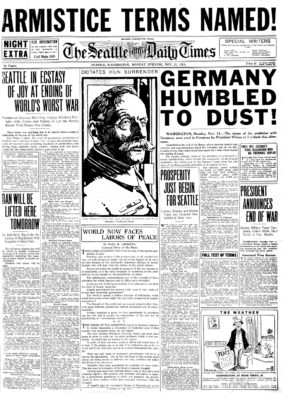 The story read: “Giving Seattle double cause for celebration today. City Health Commissioner J.S. McBride announced that tomorrow morning at 8 o’clock, he will sign the order revoking the regulations that closed Seattle schools, churches, theaters, dance halls and all places of public assembly,” though citizens were still required to wear gauze masks in public.

In addition, the populace was warned to “keep their heads” while returning to normal life to prevent a second shutdown. Unfortunately, no one did.

A second spike in cases erupted, peaking nearly a month later Dec. 9. Schools reopened in January 1919. The virus was finally gone in Seattle after the Stanley Cup Final outbreak the first week of April.

Similar to Covid-19, the 1918 H1N1 outbreak was easily transmissible and had no vaccine, no viral suppressant to slow the disease and most importantly, society lacked herd immunity; creating a perfect storm for rapid spread.

Dissimilar to Covid-19, the 1918 H1N1 outbreak hit young, healthy people hardest, lowering the life expectancy in the U.S. by more than 12 years. More than half of Washington’s 5,000 deaths were citizens “between the ages of 20 and 49.”

After the pandemic ended, society quickly sprang back to life.

“As soon as the dying stopped, the forgetting began,” was a memorable line from the PBS documentary American Experience: Influenza 1918. The back-to-back traumas of war and pandemic did not produce a hangover that lasted years, but served as the seed to the rebirth that became the Roaring ‘20s.

In a 1919-20 Metropolitans season preview, the Seattle Daily Times subhead read, “Great Season Looms.” The article proclaimed, “Fans may rest assured that Seattle will have as good a hockey club as there is in the game.”

Season tickets sold out before the first game. The Times reported, “The opening game of the 1920 hockey season in Seattle will be played tomorrow night, and from every indication will be witnessed by the greatest crowd that the arena has ever held.” The Metropolitans again won the 1920 Pacific Coast Hockey Association crown and traveled to Ottawa for the Stanley Cup Final, losing in five games.

Today, as we sit in our homes, we are a month into what may be a long haul. We know that people around the world are dying, and others are suffering physically, emotionally and financially.

Sports fans have little losses – Final Four, Opening Day, the Masters, NBA and NHL playoffs. For the participants, it goes a little deeper.

As a former University of Washington baseball player who had a life-changing season as a college senior, I have a hard time imagining this year’s UW seniors sacrificing a similar opportunity.

To know athletes are being denied rare chances hurts – especially the Gonzaga men’s basketball and Huskies softball teams that had legitimate chances to win national championships.

To know how many parents, myself included, are missing a spring of watching kids play little league. Seeing the smiles and tears, learning to love sports.

For me, the pandemics a century apart collide in my head.

I spent much of the past two years living vicariously in late 1910’s Seattle, researching and writing a book about the Metropolitans, When It Mattered Most. In January, I wrote an essay for HistoryLink.org on the crazy historical anomaly that was the unfinished 1919 Stanley Cup Final — the only one in the sport’s history.

I was looking forward to coaching my summer baseball team, excited about the work our seniors put in over the off-season, confident they would see the payoff this spring in their high school seasons. Today, I can’t believe history has repeated itself.

I want sports to return as bad as the next guy. I coach kids I care deeply about, all wanting a senior season. I have former players waiting for the MLB draft, shriveled from 40 rounds to five, and others sitting in minor league purgatory, worried that they may lose a precious season of pro ball and whatever chance they have of making the big leagues.

Yet my experience researching the 1918 Spanish Flu pandemic gives me perspective. It makes me not want to rush back and unleash a massive second wave of sickness and death.

Rushing back in pursuit of the normalcy of sports means athletes of all ages risk more than they already have surrendered. The economic hardship we’re experiencing today is real and more horrific than in 1918. Yet two months of devastation is better than four, or worse — another major surge in the fall.

My experience researching 1918 also gives me hope that we will return strong, with full stadiums, packed bars and restaurants and resilient people of all ages loving the competition. It’s up to us to weather this storm a little longer, so history can once again repeat itself with a sustainable economy — and championship Seattle sports.

Kevin Ticen is a former walk-on catcher turned captain for the University of Washington baseball team. He was also an Anaheim Angels farmhand. He spent five years on the Huskies baseball coaching staff and still coaches a high school-aged summer baseball team. His 2019 book, When It Mattered Most, chronicles the Seattle Metropolitans’ historic 1917 Stanley Cup championship.