Thiel: Why Seahawks need to take an O-tackle

Sure, Seahawks need a better pass rush. But they have a higher directive: Preserve Russell Wilson. A left tackle is needed as a future anchor tenant. Here’s a good one. 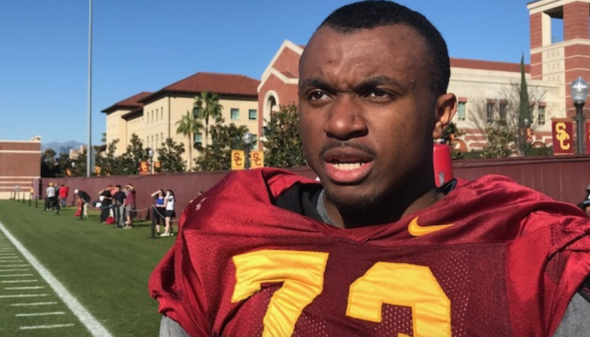 Rarely does anyone guess right on the Seahawks’ first-round draft pick. It’s almost as if coach Pete Carroll and general manager John Schneider take pride in pump-faking fans and the punditry. These two are like the late hoops star Pete Maravich, going behind the back and through the legs before scoring with a blind overhead flip.

Except they are overdue for a score.

Since the great first round selections of 2010 — RT Russell Okung and FS Earl Thomas in the first 14 picks — they have only three of their own first-rounders on the current roster, and two, DE L.J. Collier and RB Rashaad Penny, didn’t play in the 2019 playoffs. The third, DE Bruce Irvin, is returning as a free agent after the Seahawks declined to pick up his contract option after the 2015 season. They said good-bye in the same manner to the 2011 first-rounder, OL James Carpenter.

Most football-watchers understand some of the reasons. The Seahawks’ persistent success assures a low first-round pick, well after the likeliest 10-year pros have been selected. They traded out of the first round four times (2013-14-15 and 2017)  to get additional picks or veterans in trades. The most recent two selections, Penny and Collier, were injured and remain early in their careers. And hey, every team has busts in the first round.

All true. Also true is the main reason for all the Seahawks’ success over the past decade is Russell Wilson. He turns 32 in November and has never missed a game, not even for a bad hair day.

Among all his feats, Wilson’s streak of showing up every day is the most impressive. Yes, he’s played in an NFL era where rules changes offer QBs unprecedented protections. Tell that to his 2012 draft classmates Andrew Luck and Robert Griffin III.

The Seahawks can make no better personnel investment than in hiring those who can directly help protect the Wilson investment. Shockingly, Schneider is aware.

“We love our quarterback,” he said in a Zoom conference Tuesday with Pete Carroll. “We want to have as many grown men in front of him as we possibly can.”

Indeed, the Seahawks have assembled remarkable coterie of grown men for the task this off-season — 18, in fact.

“You know that we are not break-the-bank free agency people,” Schneider said. “We look for commonalities and fits, and what’s important for our quarterback.  It was important for us to be able to identify some people early on. Quite honestly, we hit, in our mind, what was one-two-three in free agency.

“We felt like we could make a difference in free agency, playing by our rules and what our philosophy is, and trying to protect our quarterback in the best fashion we possibly could.”

The choices may work out brilliantly. But that doesn’t mean they shouldn’t add a 19th guy if he is genuinely a future anchor for a line that grows as Wilson slows.

Schneider acknowledged the vulnerability shared by every NFL team.

“One of our primary lessons throughout the years is as college football has developed, offensive linemen are very hard to find,” he said. Then referencing the additions to current group:“This really gives us an opportunity to go into the draft and take the best player.”

But that still can be an O-lineman. Who might that be, should the Seahawks actually use the No. 27 pick Thursday?

Why an offensive lineman? Two reasons:

The Seahawks need an anchor tenant on the line to succeed Brown because they can’t keep duct-taping with single-year free agents, converted D-linemen and waiver-wire warriors. They knew that in 2016 when they took Ifedi with the first-round choice, but it didn’t fully work, even if he did start 60 of 64 games. They didn’t pick up his fifth-year option, and the Bears signed him for a single year at what amounts to the veteran minimum.

Jackson isn’t the caliber of the top four tackles in the draft —  Andrew Thomas of Georgia, Jedrick Wills of Alabama, Tristan Wirfs of Iowa and Mekhi Becton of Louisville, all of whom likely will be taken in the first dozen picks. But he’s in the next group of linemen.

At 6-5 and 322 pounds, he’s a serious athlete. At the combine, he ran a 5.07-second 40-yard dash, had a 31-inch vertical, a 115-inch broad jump. He blocked two field goals last season. Pro Football Focus gave him in the past two years pass-blocking grades of 78.4 an 78.8, among the best in the nation.  Scouting reports say he has the versatility to play right tackle as well as guard.

From Daniel Jeremiah of NFL.com:

Jackson brings an intriguing blend of size, athleticism and upside. In the passing game, he has the quickness to easily cut off speed rushers and he plays with good knee bend and balance. He needs to improve on his punch, as he’s often late to shoot his hands and gives up his chest, leaving him vulnerable to the bull rush. He flashes the ability to settle down after giving ground, but this needs to improve. In the run game, he has the quickness to reach/cut off on the back side and he does a good job of staying attached on the front side. His overall play strength needs to improve, but he’s only 20 years old and that should come in time. Overall, Jackson isn’t ready to play at a high level right away, but the upside is tantalizing.

Plus, he has a good backstory that reveals character. When his younger sister was diagnosed with a rare form of anemia that required a bone-marrow transplant, Jackson was a perfect match.

Instead of training in Los Angeles for his junior season, Jackson spent the summer working out at home in Arizona to avoid a risk of infection. In July, he had marrow extracted from three points in his hip. His sister is on her way to a full life, and Jackson’s pro trajectory was slowed but never sidetracked.

O-linemen are never sexy first-round picks. But no one was complaining in Seattle in 2005 when Walter Jones and Steve Hutchinson had more land in their names than the Louisiana Purchase.

Besides, this year’s crop of D-linemen is so deep the Seahawks can get a quality pass rusher in the second round. They’re simply easier to find than a long-term O-lineman.

The choice of Jackson at 27 is unlikely because the Seahawks probably will move out of the round for additional picks. A year ago, my pick was DK Metcalf, which looked smart except for the fact that he ended up as Seattle’s third pick, the final choice in the second round after the Seahawks took Collier 29th, then FS Marquise Blair of Utah 47th in the second.

But perhaps the Seahawks will do the right thing and agree with me. Most everything else in 2020 is preposterous, so the theme is set.