Pete Carroll likes the tech of this year’s NFL stay-at-home draft. John Schneider is not so sure, especially after installers tore up part of his house. 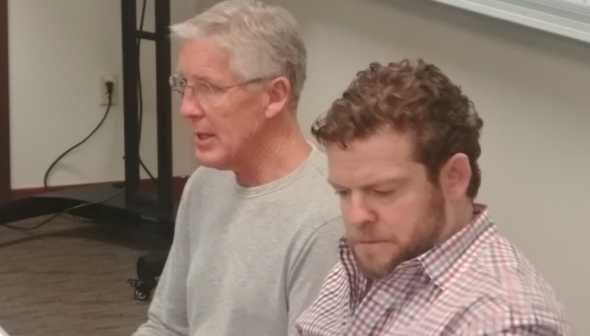 No more of this side-by-side stuff for Pete Carroll and John Schneider. / Art Thiel, Sportspress Northwest

When RT Germain Ifedi left in free agency for the Bears, it can be said that the Seahawks lost their most experienced guy in professional social distancing. Now we learn that the Seahawks may be a little shaky in the latest enforced trend in the altered world, Zoom conferencing.

The NFL draft starting Thursday will be done virtually. All the scouts, coaches, executives and players in 32 cities will participate from their homes, providing the sport a challenge almost as formidable as a call of pass interference.

The technological feat is being accomplished by an abrupt, mass deployment of communications hardware and software, including conferencing services such as Zoom, Skype and Teams.

When it comes to tech hardware and its operations, general manager John Schneider in his home apparently reminds no one of Han Solo piloting the Millennium Falcon. Work crews had to tear up a couple of walls for the installation of what “seems like 25 screens,” he told reporters from his home Tuesday, chuckling over-confidently in the manner of a newbie who has yet to be told about the launch keys for the photon torpedoes.

When it was time for a shakedown cruise, the NFL ordered up a mock draft Monday so participating teams could simulate the real thing. When it came time for Schneider to respond to the command, “With the 27th pick, the Seattle Seahawks  . . . ” Schneider left on his Zoom mute button.

The league passed him over.

And you thought in 2017 taking Malik McDowell was bad.

“We weren’t even involved in the (round),” he said. “Somebody said, ‘Hey John, make sure you’re unmuted.’

“I unmuted and everything went along great. It worked out in the second round. We were able to get Pete on Zoom.”

Pete, of course, is Pete Carroll, Zoom master. So he says.

“I’m particularly strong in that area, so my place is pretty good,” Carroll said, grinning. “John’s struggling a little there.”

The banter between friends and colleagues entering their 11th NFL draft together was refreshing. You recall laughter, don’t you? It was another small reminder about the absence of sports.

That Schneider was willing, as he said, to “throw myself under the bus” to tell the story was worthy. Nor was he alone in technology faux pas. Several of the more than 20 reporters who called in Tuesday did exactly as Schneider, leaving on the mute button when speaking. For which Carroll introduced a new phrase into the lexicon:

By the end of the conference, all of us were nervously eyeing the mute button, not wanting to be that guy.

“I kind of like all the activity,” said Carroll, a black belt in FOMO (fear of missing out).  “I’ve got boards that wrap around the room. I’ve got seven screens going, which is not uncomfortable for me. We’ve got landlines, we got cell phones, we got back-up cell phones. We got all kinds of stuff. So I’m really pretty much gonna fire away.

“I have my own set up, so I’m gonna match what (Schneider and scouts) are doing there, so that I keep track. It’s kind of cool  . . . We just both hope we don’t get overloads on circuits, and everything shuts down. We got a lot more things plugged in than we normally do around here.”

A crash is unlikely to cause the Seahawks to fall behind, especially with Carroll. Nobody is better at shutting the whole thing down with a red challenge flag.

The technology workarounds for the NFL’s first stay-at-home draft are not without dividends. When the league suspended travel, lots of follow-up scouting time was lost, but insights were still to be had.

“I think this face-to-face communication, and not just texting and not just picking up the phone” is better, Schneider said. “I think when you’re looking somebody in the eye all the time, you can tell a lot.

“Some some dudes are ready for the interview. They’re psyched up. We had one guy wearing a tie. We had another guy in bed, watching TV.”

Schneider didn’t divulge names. Pity. I have a friend in Cleveland I could have tipped to a Browns draft choice.

As someone who maneuvers on draft day without peer, sliding up and down in almost each round, Schneider admits the unfamiliar may slow his roll.

“At this point, I would say I’m about 80 percent there,” he said. “We’re gonna practice some more, with a couple more teams, in a live version on the clock (rehearsing) a negotiation.

“So honestly, to say that I’m totally comfortable with it right now . . . I’m not about where I will be” by Thursday.

Carroll admitted the reduction of in-person visits limits his chances to get inside the heads of potential draftees, where he enjoys dwelling.

“It’s definitely gonna be different,” he said. “I really can’t tell you yet what’s it’s gonna come out like.”

It’s almost as if Carroll has a mute button forced upon him.