A quick look at the Seahawks’ eight draft picks

The Seahawks’ predictably went hard for defense, with two linemen and and a linebacker in the first five rounds. They also went late to get a receiver with a backstory. 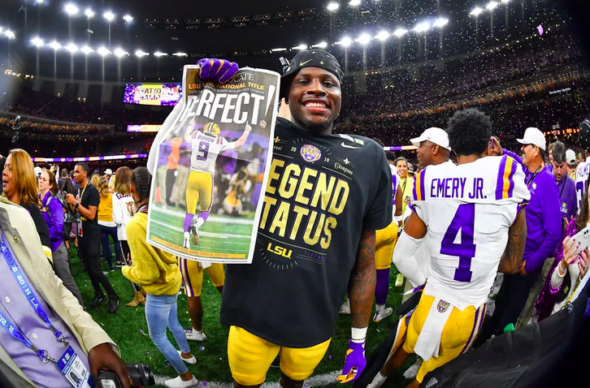 Highlight videos and scouting summaries of the Seahawks’ 2020 draft class. Scouting information provided by the Seahawks and various draft services and publications.

Summary: Called by some Bobby Wagner, Jr., Brooks has NFL prototype LB body and good instincts. Aggressive downhill tackler. Has some trouble getting off blocks. Gets lost in zone drops and lacks fluidity in pass coverage.

Role with Seahawks: Brooks may fill the vacant third spot (Mychal Kendricks has yet to be re-signed) in the 4-3 scheme next to Wagner and K.J. Wright. Versatile enough play all three LB spots. Better against the run than the pass.

Carroll: “Really clear communicator. Strong attitude. He really set us in a comfortable place, knowing he’s going to be a tough guy, coming in to prove it. Not this big, flowery, big-time guy. He has hard-nosed work ethic we really accepted right off the bat.”

Quote: “Bobby Wagner is someone I really look up to. He’s been one of the best linebackers in the league ,so to get a chance to learn from him, play beside him, feed off of him, pick his brain, I think it’s an incredible opportunity for me, also with K.J. Wright.”

Summary: Five-star physical traits with three-star skills. Held his own against top-flight SEC tackles. Lacks instincts on rush, but compensates with explosive power.  If he learns pass-rush techniques, could become dominant.

Role with Seahawks: Rush end (LEO) in the fashion of Frank Clark and Chris Clemons. Likely getting every chance to start.

Schneider: “Our (personnel people) did a great job working their tails off to (trade up and) acquire him. It was pretty hot. We view him as one of the very, very top pass rushers in this league.”

Quote: “I think I’m really great in the pass rush. I have a really good long arm stab and I can use speed and power moves, so I think I bring a lot to the table.  I think I need to get better at using my hands and being more technical with that.”

Summary: 28-game starter for the best line in the college nation, the run-blocking tape shows a forklift dressed as a right guard with the power and leverage to move some of the best interior defenders in the conference. Lacks athletic ability for outside zone or long pull, has below-average slide quickness.

Carroll: “There’s just so many cool things about the guy. He’s so stout, he’s so heavy with his hands, he’s got a great anchor, he’s got really good eyes and you can see him playing against top-level competition.”

Quote:  (On being part of one of the greatest lines in college football history) “When you step in that (O-line) room, about 12 or 13 guys, we called it the best five. Everything that you have outside of the field, drop it right there, because you know what we come out here to do. There were some real hard workers in that room. They’re dedicated, responsible and accountable. They’re why we won as much as we did this 2019 season.”

Summary: In the great tradition of Stanford tight ends, Parkinson is big, strong and smart. Much more a pass catcher than a blocker, needs to get stronger. Predictable route-runner and not as fiery as his predecessors into the NFL.

Role with Seahawks: He’s the fifth in a crowded position room (for now), but he’s a Jimmy Graham-sized red-zone target, only with heart.

Carroll: “I’m hoping with that frame that we can beef him up a little bit. He can become a really effective blocking force. He’s an enormous kid and the catching stuff is all there. We like to see him develop as a blocker and become a unique player as a combo threat.”

Quote: Pass-catching “is something I have prided myself on, someone that’s going to go up and make every catch. The quarterback can throw the ball anywhere, and I can go up and get it. Didn’t have a drop last year on catchable balls. (Blocking) I make sure I’m always working on it, to be that consistent presence.  Obviously, room for improvement, as I was mainly a receiver my first couple years at Stanford.”

Summary: A premier pass blocker, runs angry with square pads, forward lean and a willingness to explode into contact. Feet keep moving through contact and he packs a punch. Poor technique; new to the position, still calculating pressing the line of scrimmage. Has to develop more patience and the ability to anticipate creases.

Role with Seahawks: Former quarterback and wide receiver is a versatile back who can return kicks and is suited for third-down role long sought for C.J. Prosise.

Schneider: “I would say, ‘Upside.’ He was a high school quarterback, went (to Miami) as a receiver. He split time with (Seahawks RB Travis Homer).”

Quote: “Whether it’s in the slot, or receiver somewhere, or special teams returning or covering a kick, or even playing running back, I feel like I can help.”

Summary: Disruptive presence with good snap anticipation and sudden quickness. Lacks technique and moves. Needs to play under control more. Lost a scholarship offer to Texas A&M over an altercation with a girlfriend. No charges were filed.

Role with Seahawks: Depth along a D-line that lost Quinton Jefferson and Al Woods in free agency.

Carroll: “I’m really fired up that we were able to get Alton where we got him. He’s got the ability and the production to do stuff like guys that were picked quite a bit higher. We were fortunate to get that done.”

Quote: (On the workouts he had with former Seahawks DE Cliff Avril at Tracy Ford Sports in Bellevue) “We would go like three times a day, six days a week.
When I got to work with Cliff, it was one or two days out of the week. It was very position-specific, like body mechanics, which will be the difference between getting to the quarterback and getting the sack.”

Summary: Good combo of size and speed for a slot receiver. Good hands but not a great route runner and often catches the ball with his body. Above-average returner.

Schneider: “He’s a really, really tough-minded individual. Tons of grit, very instinctive. He’s played outside, he’s played inside, he’s a very good punt returner. I would say from a special teams standpoint, he’s going to be a guy that’s going to be in the mix right away. He’s just got a great attitude about him.”

Quote: “Special teams allows me to kind of get a step further on the field besides offense. Just come in, catch the ball and don’t put the ball on the ground.”

Summary: A reserve tight end for most of four years at LSU, where he was too small, Seahawks are listing him as a wide receiver, where he’s a giant. Started two games in 2019 for the NCAA champs and caught 12 passes for 130 yards. Had to put on weight for the TE position but lacks strength, and has receiver-like lower body.

Role with Seahawks: Special teams, probably destined for the practice squad to buy time to develop.

Carroll:  “He’s a project that we were willing to take on. Everybody had a very strong feeling for him.  He had a great Senior Bowl. (At LSU) they had so many great players they didn’t play him enough. He’s a marvelous talent. We’ll see if we can find a good way to make it come to life. It surely is going to be on us, because he’s going to do his part. He has so much energy for it, such a great motor. A really good guy to bring into the program.”

Quote: “I’ve been through so much adversity. I’ve stayed under a bridge a few nights. I saw my mom and dad get incarcerated. I saw my dad do cocaine in front of my mom. I saw my dad beat my mom. I saw my brothers and my dad get in a fight. It’s just so much that I’ve been through. Every single day, I think about that, and I think about my situation growing up. You can say that motivates me. It does, actually. It motivates me every single day.